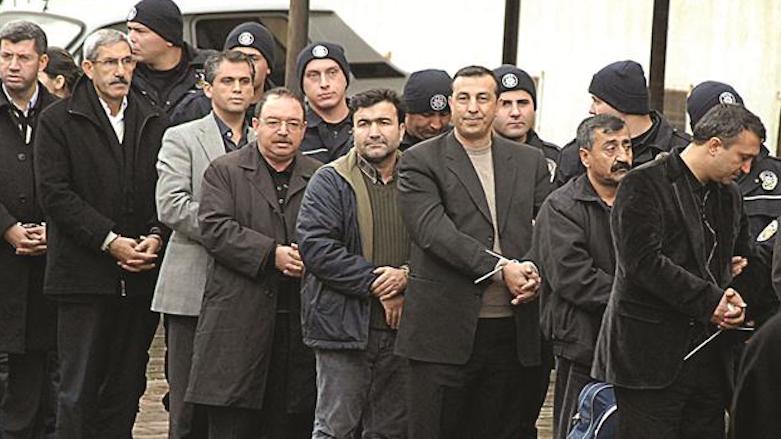 Turkish police line up handcuffed Kurdish politicians in front of a Diyarbakir courthouse, in this April 2009 picture. (Photo: DHA)

DIYARBAKIR-AMED, Turkey’s Kurdish region,— A total of 111 suspects in the main case into the Kurdistan Communities Union (KCK), an umbrella group of Kurdish group that includes the Kurdistan Workers’ Party (PKK), were given a cumulative total of more than 1,100 years in jail by a Diyarbakir court in Turkish Kurdistan on March 28.

The Diyarbakir 2nd Court of Serious Crimes sentenced 111 suspects to prison terms of between 1 year, three months and 21 years in jail, while also acquitting 43 suspects. Out of the 111 suspects, 16 were given 21 years of prison sentence each.

Lawyers attended the hearing of the case, which has been continuing for seven years and which included 154 suspects being tried without arrest. In their final statements, the suspects said that they demanded their acquittal.

Lawyers for the suspects left the courtroom after the court board failed to appear until 5 p.m. even though it was supposed to rule at 4 p.m. The lawyers returned to the courthouse upon a call from president of the court and the 300-page ruling report was read out.

Democratic Regions Party (DBP) co-chair Kamuran Yüksek was among those sentenced to 21 years of prison for “finding and managing a terrorist organization.” Yüksek was also given another eight years, nine months in another case and subjected to a warrant for his capture, he said on Twitter. The DBP co-chair is currently overseas.

The ousted co-mayor of the southeastern Kurdish province of Mardin, Ahmet Türk, was sentenced to one year and three months in jail for “opposing the law on assembly and demonstration,” but his sentence was postponed.

The court sentenced one co-mayor of Diyarbakir Metropolitan Municipality, Fırat Anlı, to six years and three months in jail for “membership in a terrorist organization,” while also sentencing Democratic Society Congress (DTK) co-chair Hatip Dicle to nine years in prison over the same charge.

The files of 37 suspects, of whom eight are lawmakers from the opposition Peoples’ Democratic Party (HDP), were previously separated from the case that consists of 850 files.

The KCK-trial began on October 18, 2010 when a Turkish court began the trial of 152 high profile Kurdish politicians and rights defenders, accused of being the urban wing of the PKK. Since then thousands of people have been detained.

The PKK took up arms in 1984 against the Turkish state, which still denies the constitutional existence of Kurds, to push for greater autonomy for the Kurdish minority who make up around 22.5 million of the country’s 79-million population. Nearly 40,000 people have been killed in the resulting conflict since then.