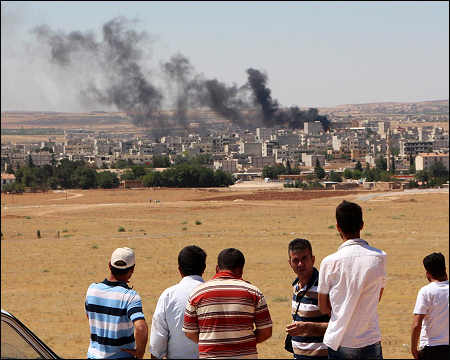 Kurdish fighter besiege IS militants in multiple areas of Kobani

BEIRUT,— The clashes continued between Kurdish YPG forces and remains of Islamic State (IS) militants who are besieged inside the Kurdish town of Kobani, Britain-based Syrian Observatory for Human Rights said on Friday.

An attack by IS fighters on the Kurdish town of Kobani in Syrian Kurdistan and a nearby village has so far killed at least 146 civilian Kurds after two days of fighting, in the second-biggest massacre by the hardline group in the country, a conflict monitor said on Friday, Reuters reported.

Islamic State entered Kobani at the Turkish border on Thursday and clashes have continued with Kurdish YPG forces in the town, said Rami Abdulrahman, head of the Britain-based Syrian Observatory for Human Rights.

IS militants could infiltrate to the city wearing uniforms of Kurdish Peoples’ Protection Units (YPG) and allied rebel brigade, where the clashes started Thursday dawn and accompanied with detonating 3 booby- trapped car inside the city, the observatory said.

Abdulrahman, who tracks the conflict using sources on the ground, said it was the biggest single massacre of civilians by Islamic State since the killing of hundreds of members of the Sunni Muslim tribe Sheitaat tribe in eastern Syria last year.

Kobani-based Kurdish activist Mustafa Bali says small groups of jihadis are still in the town and have taken civilians as hostages.

He added that Kurdish fighters are now besieging three locations where IS fighters took up positions.

Bali said more than 100 civilians were killed in Kobani as well as 40 IS fighters whose bodies are still in the streets.

“According to medical sources and Kobani residents, 120 civilians were executed by IS in their homes or killed by the group’s rockets or snipers,” said Rami Abdel Rahman, director of the Syrian Observatory for Human Rights.

Kobani on Syria’s border with Turkey had become a symbol of Kurdish resistance against the Islamic State extremists.