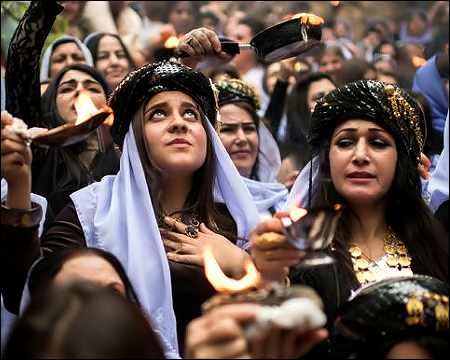 LALISH, Iraq’s Kurdistan region,— Thousands of Yazidis flocked to a shrine in Iraqi Kurdistan region to mark the New Year on Wednesday, in the minority’s biggest gathering since it was targeted for genocide by jihadists.

Charshama Sor (meaning Red Wednesday) is the celebration of Yazidi New Year which occurs in April every year on the Wednesday.

Wearing traditional Yazidi clothes, holding candles and paraffin lamps, they started gathering in the holy town of Lalish on Tuesday for celebrations ahead of their New Year.

The event, known by the ethno-religious minority as “Carsama Sari Sali”, is meant to commemorate the creation of the universe by the angels and celebrate nature and fertility.

But the mood was sombre among the faithful gathered in Lalish, every one of whom was affected by the violence that erupted nearly three years ago when the Islamic State group took over their traditional homeland.

“I’m not happy, it’s not like before, because there are those who are still in the hands of Daesh (IS),” said Zoan Msaid, a Yazidi woman from the Sinjar area who now lives in a camp for displaced people.

“We cannot forget our customs and traditions but I just want those who are still held to come back, that’s all. We ask for nothing more.”

Yazidis are neither Arab nor Muslim and when IS swept across northern Iraq in 2014, it carried out massacres against the minority which the United Nations said qualified as genocide. 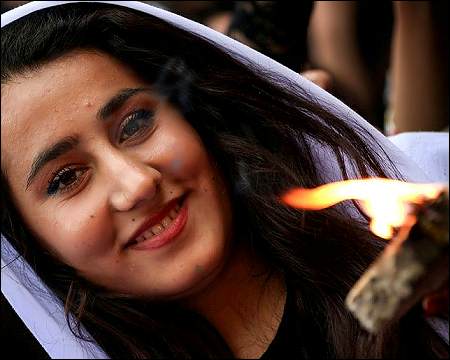 Most of the several hundred thousand members of the minority live in northern Iraq, mainly around Sinjar, a large town which anti-IS forces have now retaken but was extensively destroyed.

Islamic State group has captured on most parts of Sinjar (Shingal) district, west of Mosul on August 3, 2014 which led thousands of Kurdish families to flee to Mount Sinjar, where they were trapped in it and suffered from significant lack of water and food, killing and abduction of thousands of Yazidis as well as rape and captivity of thousands of women.

Those who stay behind are subjected to brutal, genocidal acts: thousands killed, hundreds buried alive, and countless acts of rape, kidnapping and enslavement are perpetuated against Yazidi women. To add insult to injury, IS fighters ransack and destroy ancient Yazidi holy sites.

IS jihadists captured Yazidi women and turned them into sex slaves to be sold and exchanged across their self-proclaimed “caliphate”. Around 3,000 of them are believed to remain in captivity.

The Yazidis are a Kurdish religious group linked to Zoroastrianism and Sufism. The religious has roots that date back to ancient Mesopotamia, are considered heretics by the hard-line Islamic State group.

Some 600,000 Yazidis live in villages in Iraqi Kurdistan region and in Kurdish areas outside Kurdistan region in around Mosul in Nineveh province, with additional communities in Transcaucasia, Armenia, Georgia, Turkey and Syria. Since the 1990s, the Yazidis have emigrated to Europe, especially to Germany.

There are almost 1.5 million Yazidis worldwide.