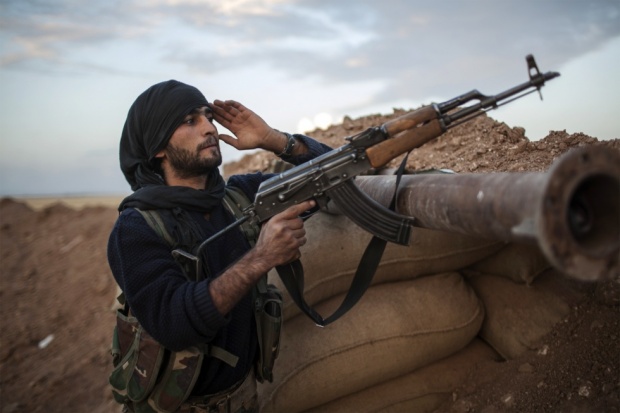 A fighter of the Committees for the Protection of the Kurdish People (YPG) in the town of Derik, Hasakeh governorate, on 19 October, 2013 (AFP)

Middel East Eye, Monday 19 January 2015 – At least 18 people have been killed in unprecedented fighting between Kurdish forces and Syrian government troops in the northeastern city of Hasakeh, a monitoring group said Sunday.

The clashes, which erupted in the early hours of Saturday, were continuing for a second day, the Syrian Observatory for Human Rights said.

A woman civilian was also killed in the fighting on Saturday.

The clashes broke out after Kurdish fighters detained around 10 Assad loyalists they accused of seizing part of a demilitarised zone.

Certain districts are off-limits to both sides under the deal.

The two sides have fought together to keep Islamic State group out of Hasakeh, a provincial capital of some 200,000 people, but Kurdish relations with government forces are complicated.

The Assad government withdrew from most Kurdish-majority areas of Syria in 2012, focusing its forces on fighting the burgeoning Sunni Arab-led rebellion.

Since then, the Kurds have worked to build autonomous local governments in the three regions where they form the majority population.

Kurdish forces have taken over most security responsibilities in those areas.