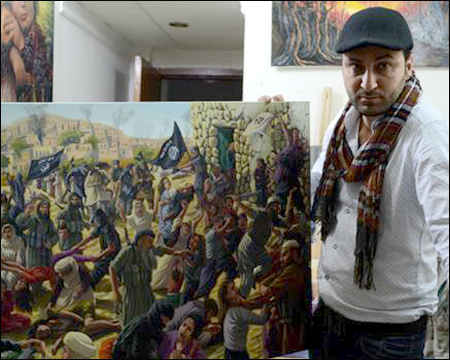 DUHOK, Kurdistan region ‘Iraq’,— In happier times, Ammar Salim Khidhir dedicated much of his art to children, making larger-than-life statues of characters such as SpongeBob SquarePants from materials including sponge and silicone.

Gone are those days. Now, Khidhir sees himself on a historical mission to “document the calamity” of his Yazidi community at the hands of the Islamic State of Iraq and the Levant (ISIL).

The 31-year-old painter – who goes by the alias Ammar al-Rasam, Arabic for Ammar the painter – paints from early evening to dawn in the city of Duhok, located in Iraq’s Kurdish region. He is now working on his ninth painting depicting ISIL’s gruesome mass killing last June of hundreds of Iraqi soldiers based in the Speicher military camp near Tikrit in central Iraq. In this painting, the Tigris River’s water is reddened with blood.

The rest of Khidhir’s paintings focus on ISIL’s actions against the Yazidi community, which practises a distinct Mesopotamian faith. When ISIL overran Yazidi-populated areas in Iraq’s western Nineveh province last summer, the group’s fighters killed hundreds of men, abducted Yazidi women and girls, coerced many to convert to Islam and forcibly conscripted young Yazidi males into its ranks.

“People have of course heard about the atrocities in the news, but … they don’t have much of a real idea of what exactly happened,” Khidhir told Al Jazeera from inside his small workshop, whose walls are decorated with his paintings. “I made these paintings so they can actually imagine what happened.”

His paintings are rich with details of the disaster that befell the Yazidi community and Iraqis at large amid ISIL’s rampage. One work shows a slave market in Mosul’s Grand Mosque, where Yazidi women and girls are being sold, some half-naked. In one corner, a chained Yazidi women has red eyes, symbolising that she has shed tears of blood over her miserable fate.

The mosque depicted in this painting, which took more than a month to complete, is the same location where ISIL’s self-proclaimed caliph Abu Bakr al-Baghdadi delivered a speech in June to declare the establishment of the group’s caliphate.

Qaso Abdo, a Sinjar resident who had many family members captured by ISIL, feels strongly about Khidhir’s paintings. While his father, two brothers and an uncle were released earlier this year, his niece and her six children remain in captivity.

“The paintings bring the truth before my eyes. This is what happened to us, to my relatives,” Abdo told Al Jazeera. “His works are a message to the world about what we have gone through.”

Khidhir has started advertising his work on social media outlets such as Facebook and Twitter, where some scenes, such as the slavery market in the grand mosque, have not sat well with everyone.

“I’ve been criticised and threatened by some people, even death threats… They say, ‘You have insulted the mosque’,” Khidhir said. “I say to [them], ‘Why are you so angry because of the painting of a place? Why aren’t you furious over the violation of those women’s dignity and honour?… Why don’t you go out and criticise the atrocities instead of the paintings of the atrocities?’”

Others are quick to praise his work. Arkan Najman, a high school teacher in the nearby town of Shekhan, gets emotional when he speaks of Khidhir’s paintings.

“He’s done what words could never do,” Najman told Al Jazeera. “When you look at the paintings, you live the disaster. You become one of the characters.”

In one of Khidhir’s more surreal paintings, an iconic minaret in Sinjar is depicted as a woman’s face, crying in despair. Mount Sinjar, the sanctuary to which tens of thousands of Yazidis fled following ISIL’s onslaught, is depicted as a roaring lion. In the background, ISIL flags resembling mythical demons creep away along the cracked earth, while yellow rays of sunlight penetrate the dark sky.

Khidhir, who works for the government, spends much of his $600 salary on oil paints, canvases and rent for his workshop. Although his popularity is on the rise thanks to social media, he does not currently plan to sell any of his paintings.

Rather, he plans to complete a series of 20 paintings about the crisis gripping Iraq and display them within the country and outside. He recognises that he has come a long way since his days as a virtually unknown artist in Bashiqa, a small town near the ISIL stronghold of Mosul.

“I have a human message to send: There needs to be a solution,” Khidhir said. “For how long will this tyranny have to continue?”