A vivid picture of hypocrisy: Macron and Erdogan trade arms as Kurds mourn

This article was published on The Region on 6 January 2018. 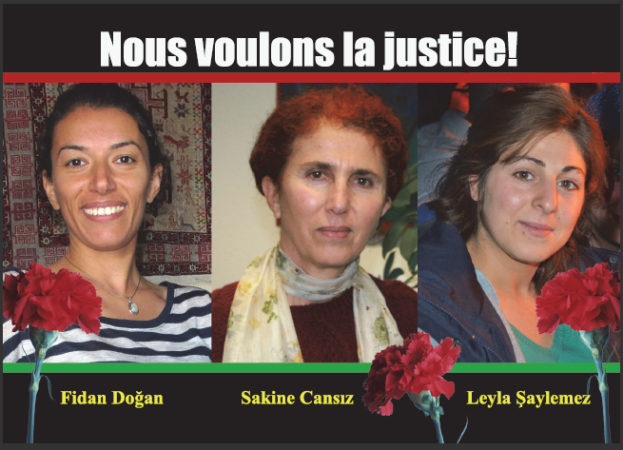 Five years ago Tuesday, three revolutionary Kurdish women— PKK founding member Sakine Cansiz, KNK Representative to France Fidan Dogan and youth activist Leyla Soylemez—were murdered in Paris on the orders of the Turkish state. This year, just days after the PKK’s capture of high-ranking MIT agents proved the Turkish state’s role in the assassinations, Erdogan has met with French President Macron. In a spectacular and ritualistic gesture on the global diplomatic stage, Macron mentioned human rights “disagreements” with Turkey. “Our democracies must completely protect the rule of law,” he said, before approving a 3.4 million euro defence compact with Turkey. The hypocrisy of Western policy towards Turkey has rarely been so clear.

As Erdogan and Macron spoke, protestors from Kurdish and left-wing organizations gathered outside, and Kurdish leaders in France held a press conference on the triple murders and Erdogan’s complicity. The documents that gave their case a new relevance had just been published, available for anyone to read. Yet within the meeting—and in the reports by international media that covered it—no concern was given to their demands and the broader context of Erdogan’s war on the Kurdish movement.

The streets and the diplomatic meeting rooms must be separate worlds in order for Western leaders to square their policy with their rhetoric. They cannot acknowledge that people know their objections to human rights are empty and that their admonitions do not address the structural issues in Turkey’s treatment of minorities and dissidents. Nor can they admit outright that they do not care. All that is left is equivocation—which enables the worst impulses of Turkish policy.

In Macron’s case, even recent proof that Erdogan would call for an assassination in Macron’s own capital city could not stop him from signing millions of dollars of weapons to Erdogan’s government. His only objection was to say that Erdogan must “completely protect the rule of law” while “standing up to terrorism.” To policymakers in Western countries, who will never be threatened by the weapons they sell or policies they condone, this counts as a warning.

But what did the Turkish rule of law do for Sakine, Fidan, and Leyla? What did it do for the people of Sur and Nusaybin and Cizre, cities demolished by the Turkish government with little international outcry? What has it done for the HDP MPs detained on terrorism charges for representing their people? For Erdogan, “protecting the rule of law” and “standing up to terrorism” means exactly this—crushing Kurdish resistance whenever possible. Macron only warned him to do it quietly.

With the ongoing crackdown in Turkey and reports of new threats against dissidents abroad, that status quo is unacceptable. Activists must continue to stand up to our governments’ support of Turkey. We must protest international meetings. We must show our active solidarity with the Kurdish movements that Erdogan hopes to suppress, and make it clear that no country that claims to support democracy can help suppress them. As thousands march in remembrance of the revolutionary legacy of the women killed five years ago in Paris, we must remember what they, like thousands of others, fought for—and not allow their killers to garner international legitimacy.