Are you looking for a musician or dance group to liven up your activity? We are also happy to help you with this. 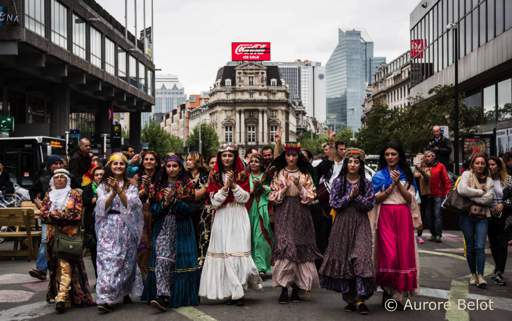 The Kurdish Institute sees it as part of its mission to make the culture of oppressed peoples and communities visible. Showing that there is such a thing as a Kurdish, Assyrian, Armenian, Yezidi, … culture is a political statement in itself. In addition, all these cultures have much more to both than music and dance. Stories, poetry and dengbej (folk stories sung) are also possible.

For example, we can start a special evening about the lack of democracy and human rights in Turkey with a short story by Selhattin Demirtas, the charismatic Kurdish politician who is unjustly imprisoned in Turkey. His moving poems and short stories – graced by a Kurdish musician – are the ideal opener of a debate or lecture on the theme.

We also program theater. The theater piece: “Poetic homage to the martyrs” is a theater performance by “La compagnie Bien A Vous – Armanç Kerboran” from France. This project by the French-Kurdish artist Juan Golan Elibeg combines singing, violin music, drama and movement as a striving indictment against the recent destruction of various Kurdish cities by the Turkish army. You can also bring this enthusiastic theater company to Flanders in 2019.

Or how about the rendition of a traditional wedding procession, a fashion show of traditional costume, a Kurdish village with tents, replicas of cultural heritage sites, traditional children’s games, …

All these things are among the possibilities to give visibility to these oppressed cultures.