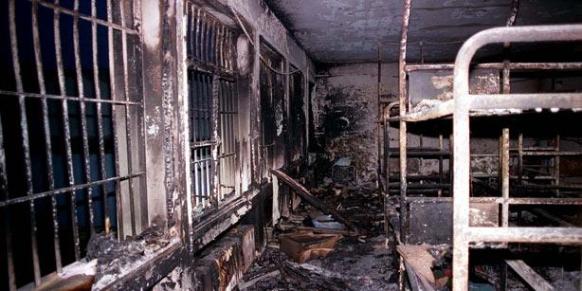 The “Back to Life” operation was carried out fourteen years ago in several prisons in order to solve the so-called “prison problem” in Turkey and end the death fast of prisoners who protested against their transfer to F type prisons with smaller cells.

The operation started in the early morning on 19 December 2000 in 20 prisons simultaneously and involved thousands of convicts and ten thousands of security personnel. 28 people died in the operation, among them two soldiers. 237 detainees and convicts were injured.

A soldier who was on duty at the Bayrampaşa prison during the “Back to Life” operation confessed  11 years later, “The detainees wanted to get out of the burning cells and surrender but the doors were not opened, the fire brigade did not intervene”.

Gendarmerie Sergeant Sabsız who gave his statement before the 1st High Criminal Court of Van on 5 July 2011 said, “Gas bombs including different, unknown substances were used; the people in the burning cells were not let to come out to surrender; nobody intervened against the fire; blankets soaked in combustible liquids were thrown on top of the burning prisoners”.

Sabsız made the following points in his statement:

* Members sent from the Ankara Gendarmerie Command Special Security Command (JKÖAK) and other personnel from I do not know where went in and intervened with gunfire. The detainees and convicts reacted by locking themselves in their cells.

* Wholes were being drilled into the prison walls and the ceilings to throw gas bombs. I do not know what was inside the bombs and they were not on our inventory. Even though I had been involved in the organization for a long time, automatic rifles that I had never seen before were used.

* When I was waiting on the corridor, inmates from a cell with women detainees and convicts banged on the door. They wanted to get out. They asked us to open the doors so they could come out. We did not intervene because we had no such order. After a short while, the cell was burning. The fire brigade team on the spot did not intervene either.

* When we entered the cell, we saw that the women were burnt like coal. It did not make sense to me that they burnt to that degree because the only items in the cell were a bed and a blanket and the burnt bodies were laying in a distance to the bed.

* Some of my ranked colleagues at JKÖAK that I met years later said that they told the prisoners, “We will save you. We are going to throw down wet blankets. Protect yourselves and wrap yourselves inside of them”. In fact, these blankets had been soaked in combustible liquids and they said that they worked like a fire accelerant.

Birsen Kars was incarcerated at the women’s ward at the time of the operation. When she was taken to hospital afterwards she shouted, “They burnt alive!” She had said in her statement given earlier, “While they were opening fire on them, they continuously threw gas bombs through the perforated ceiling at the same time. Additionally, they used a black coloured gas that was a nerve gas. The inmates’ hair and skin came off and later the fire broke out”.

It was put forward in the trial that a “chemical weapon” had been used against the persons who burnt to death. This thesis was proven by claiming that “the clothes of the prisoners remained intact while their skin had peeled off from burning”.

Prime Minister of the time, Bülent Ecevit, had declared after the operation, “These terrorists have to finally understand that they cannot keep up with the government”.