Amed Dîcle – The Raqqa operation is the start of a new and strategic period. 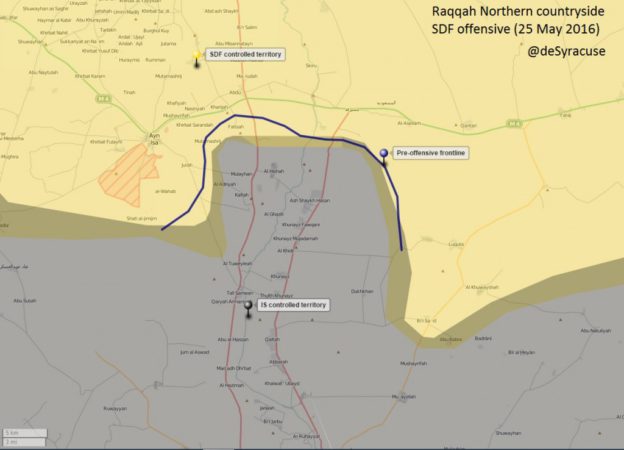 The Raqqa operation is the start of a new and strategic period. Balances will be disrupted and new developments will emerge.

Wednesday, May 25, 2016 10:30 AM
BRUSSELS –  ANF – The Raqqa operation that the world was waiting for was officially launched on May 24. There had been military, political, and diplomatic preparations for this operation for some time now. The final decision was made in mid May. Military dispatching started on May 19 and the “Operation Liberate Northern Raqqa” launched yesterday with the announcement.

The Raqqa operation is carried out by the Syrian Democratic Forces-SDF. The largest constituent of the SDF are YPG and YPJ fighters. Ekrar El Reqa and Liwa Tehrir, comprised of Raqqan fighters who joined the SDF recently, are playing an active role in the operation.

Russia declared that it was ready to support the operation in a statement given yesterday.

Raqqa operation was originally planned to start earlier. But the obstruction of the Turkish state, latest meetings of Erdoğan and Obama, and some promises given by Turkey delayed the operation. During this time, the forces to carry out the operation continued their preparations.

Turkey had told the US that it would fight ISIS with the troops it had prepared so that SDF and YPG would not be involved. The US, knowing this plan was empty promises, approved Turkey on this. But it was clear in the month-long period that the troops Turkey claimed to be “training” could not amount to anything, in quality or quantity. And there was nothing more that Ankara could say.

The “train-equip” project the Turkish government undertook with the US failed completely. The US-nationals working as trainers in the project left for Rojava and they are there right now.

US Central Command General Joseph Votel visited Kobanê last week to meet with SDF commanders and the Rojava administration. The US officials relayed to the Rojava side that  Turkey no longer had a say in the matter.

General Votel visited Ankara on his way back from Rojava and let the parties know that the operation decision had been made. Votel told the Turkish parties, “If we can’t use İncirlik air space, we will use Rimelan.” Turkey’s İncirlik advantage was voided thusly. And there was nothing else to do for the Turkish government other than praying the operation failed!

This operation is a process. The operation launched on May 24 will not end in a short time. The political and military risks of this operation are high. The structure formulated as the Democratic Syria Forces is the only model that offers hope for a Democratic Syria due to its political and military composition. The Kurds, Arabs and other ethnic and religious groups in the region have come together under this umbrella. Thus, clearing Northern Syria of ISIS will make them an uncontested power in Syria. It is obvious that there are serious powers that do not want such a development, primarily Turkey. Thus, the attacks from the inside and outside will increase as the operation advances. It is necessary to expect that gang groups will infiltrate Rojava and try to carry out all kinds of attacks. There needs to be extra caution against ISIS attacks in Turkey and Northern Kurdistan in this process. They will not refrain from attacks like the Ankara and Suruç massacres.

But these risks make it necessary not to stop the operation, but to implement it quickly. And this is what will happen.

It would be wrong to contain the Raqqa operation in just the Raqqa region. Yes, Raqqa is an important center and clearing ISIS off this area will affect Rojava’s and Syria’s futures. But Raqqa means “Northern Syria”. And Northern Syria means from Raqqa to Mınbiç, then to the north of Aleppo, namely Shehba region, and the Cerablus-Azez front.

The first objective of the operation is set to be “Northern Raqqa”. This region starts from the Eyn îsa town 50 km south of Kobanê and continues until the outskirts of the Raqqa city. The first part of the operation was planned as such and is being carried out in 3 directions.

After this region is cleared, when the SDF fighters are at the gates of Raqqa, there will probably be a new assessment of the situation. Because an urban war has a different character. Thus, the fighters will first focus on the villages and towns to the north of Raqqa. It is important to watch the developments in other parts of Northern Syria that ISIS is positioned in closely in this operation process.

The Raqqa operation will not just be removing ISIS from Raqqa, it will also mean clearing the whole of Northern Syria. Removed from Raqqa, it will be impossible for ISIS to take hold in Mınbiç and Cerablus. The fate of these regions are as one. They will be liberated together, before or after Raqqa. The military tactics of this is a job for military strategists. The developments to come are prone to great surprises. But, in the end, there will be a buffer zone between Turkey and ISIS. And this will be created despite Turkey. It is possible to read this another way if one chooses.

This maneuver will continue into the summer months. The results will define the formation of new Syria. If it succeeds as expected, if ISIS is fractured and removed from Northern Syria and Rojava, this will mean rock bottom for Turkey in Syria. It will be the stating of the obvious.

These developments in Rojava and Syria will affect the war and the Kurdish question in Turkey as well. The AKP government declared war on the Kurds because of the Rojava matter. The war decree taken in the National Security Council on October 30, 2014 has been in place. Turkey losing in Rojava and Syria will mean Kurds winning in Turkey. Thus, the developments are vital for all the parties involved.

The Raqqa operation is the start of a new and strategic period. Balances will be disrupted and new developments will emerge.