ANALYSIS: ‘This is a new Syria, not a new Kurdistan’ Middle East Eye 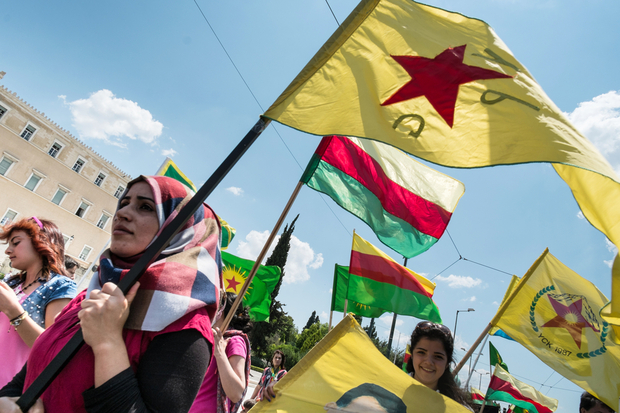 Kurdish women hold flags of YPG (People’s Protection Units) and Rojava as they demonstrate in front of the Greek parliament in Athens on July 16, 2015. The United States does not support the establishment of an autonomous Kurdish entity in northern Syria, the US special envoy for the coalition against Islamic State extremists said on July 14. AFP PHOTO / ANDREAS SOLARO / AFP / ANDREAS SOLARO

SULAYMANIYAH, Iraq – They have been locked out of Syrian peace talks, and by extension a future Syrian government, despite controlling much of northern Syria, being the only force to successfully oppose the Islamic State and having the favour of both the United States and Russia.

On Thursday the Syrian Kurds decided on their answer to this outsider status: the formation of a new Federation of Northern Syria that would take in Kurdish-majority areas of Jazeera, Kobane and Afrin, knowns as Rojava, plus Arab towns currently under Kurdish control.

Syria’s government, opposition and regional powers have rejected the new system, saying the Kurds have no right to carve up Syria for their own purposes.

But Salih Muslim Mohammed, the co-leader of the Democratic Union Party (PYD), the largest Kurdish party in Syria, said the federation should not be seen as an autonomous Kurdistan region, but rather a blueprint for a future decentralised and democratic country, where everyone is represented in government.

“There is no autonomous Kurdish region, so there is no question of recognising it or not,” he said. “It is part of a democratic Syria, and it might expand all over Syria. We want to decentralise Syria, in which everyone has their rights.

“The name is not important, we call it a democratic Syrian federalism,” he told Middle East Eye.

“The federalism we talk about is not a geographical line. Maybe tomorrow it’s going to be expanded to [IS-controlled] Raqqa, and other places,” he added. “Maybe even the people of Deraa will join.”

On Thursday, two hundred members, delegates and party members including Kurds, Arabs, Turkmen, and Christians from the Kurdish areas of Syria and Syrian towns including Manbij, Aleppo, and al-Shahbaa, elected a council of 31 members for the Democratic Federal System for Rojava and Northern Syria.

“This is considered the first system like this in the region,” said Abdulsalem Mohammed, a Kurdish teacher and activist from Qamishli. “This is after the failure of the dictatorship regimes, that ignore the rights of other nations apart from themselves.

“This is based on the principle of our co-chair system and different nations, and equality between women and men,” he added. “So, we can say that Hediya represents Rojava and Selam represents northern Syria.”

Syrian Kurds say they already control Rojava, but have in recent months extended into Arab towns such as Shaddadi, captured in February, and Tal Abyad, which fell under Kurdish control in June 2015.

The Syrian Kurds therefore have moved from a Kurdish self-administration, towards a federal democratic Syria. 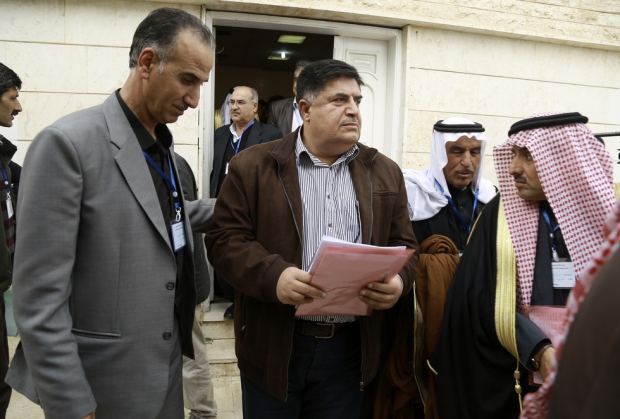 Syrian Kurds and Arabs announce their plans for federalism (AFP)

The announcement of federalism is unlikely to please the Syrian Kurds’ allies in the West, however. The US has stated clearly that it is opposed to a semi-autonomous Kurdish region in Syria.

“We’ve also seen reports about – from Syrian Kurds that they want to declare a federal region in Syria as well. And in response to that, I would just say we’ve been very clear that we won’t recognise any kind of self-autonomous – or self-rule, semi-autonomous zones in Syria,” said US State Department spokesman Mark Toner on Wednesday.

He said that such a move needed to be discussed at peace talks currently being held in Geneva between the Syrian government and opposition – both of which are against the Kurdish plan. The Kurds are not invited to the Geneva talks.

Amberin Zaman, public policy fellow at the Wilson Centre in Washington DC, told MEE the federal declaration was a strategic move by the Syrian Kurds to “gain international legitimacy and leverage when new Syria is established”.

Zaman, said the Syrian Kurds had learned from their brothers in Iraq, who worked mainly with Shia Arabs dissidents and Sunnis after they achieved autonomy in 1991 to gain more constitutional recognition.

“The Syrian Kurds recognise that if you use the word Kurdistan, it’s radioactive – it sets of all kinds of alarms, triggers reactions make life much more difficult for them, particularly the Turks obviously, but also the Arabs too,” said Zaman.

“They recognised the need to build coalitions with Arabs on the ground, because they are increasingly expanding beyond their natural borders. It’s only through building such coalitions that they can sustain their influence and their strength, and gain more legitimacy, and to get support from Western partners, such as the United States,” she added.

According to Dr Jonathan Spyer, the director of the Rubin Centre in Israel, it’s a gamble by the PYD and its allies.

“It is clearly the de facto governing authorities weighed the issue and decided this was the right time. They have since December 2015 been discussing the matter and stressing the nature of Rojava as offering an example of a federal future for Syria,” he told MEE.

Nevertheless, the regime and opposition still agree that partition of the country is a red line.

“Which is ironic given that it is the war between regime and rebels which is actually responsible for de facto dividing Syria,” added Spyer.

Divided by a common cause

Analysts disagree that a Kurdish-majority federal area of Syria would mean a united Kurdistan across Syria and Iraq, since the Kurdistan region under President Massoud Barzani has difficult relations with the PYD and its administrations.

On Thursday, the local Kurdish authorities in Syria denied entry to Syrian Kurdish leader, Ibrahim Biro, the head of the Kurdish National Council (KNC) from Iraq, after the Iraqi Kurdish authorities did not allow the local governor of Slemani Aso Faridoon to visit Rojava for a ceremony in Kobani.

The Kurdish National Council (KNC), backed by Barzani, has also had huge disagreements with the PYD, and both sides failed to implement three agreements to share power since 2012.

Iraq’s Kurdistan region is also based on ethnic Kurdish nationalism, and does not include any Arabs or Turkmen in its leadership, while the PYD has successfully included Arabs, Christians in leadership roles, for instance appointing an Arab, Humaydi Daham al-Assi al-Jarba, as the co-governor of Hasakah in July 2014.

The Kurdish areas in Syria are also more mixed with Arabs and Christians, while the Iraqi Kurdish region is mostly populated by Kurds only and, as a result, the PYD is forced to work more with Arabs and other minorities.

“The federalism of us and the PYD is different,” said Mustafa Sino, a KNC official in Erbil. “We want Kurdish federalism, but they want northern Syrian federalism.”

“We want one Kurdistan region,” said Ibrahim Biro in an interview with MEE. “The problem is not if we not unite on federalism or not, the problem is that they [PYD] don’t accept to work together, they want to rule by themselves,” he said.

However, the PYD has stated that the KNC was never serious in sharing power, and wanted to divide power on a 50-50 model.

For Barzani, and the Syrian Kurdish KNC backed by him, it’s difficult to accept the federal region created by the PYD and its allies.

In addition, the KRG has good economic relations with Turkey – currently fighting a Kurdistan Workers Party (PKK) insurgency since the breakdown of the ceasefire in July 2015.

“The issue is that the KRG under Barzani is aligned with Turkey and, lacking a coast, is dependent on Turkey for getting its oil out to the Mediterranean,” according to Spyer.

“And Turkey regards Rojava as an extension of the PKK, so if Barzani has an existential need to maintain good relations with Turkey, he has to be very wary of Rojava. Especially now when the Turkey-PKK peace process has been eclipsed.”