Appeal to the Council of Europe for Peace in Turkey

Six members of the Imrali Peace Delegation visited Strasbourg from 18 – 22 April to call upon the Council of Europe to persuade its member Turkey to resume the peace talks with Abdullah Ocalan, the imprisoned leader of the PKK. 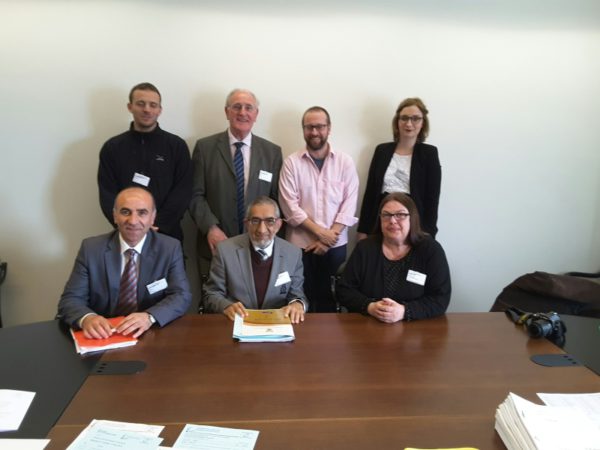 During a previous visit to Istanbul in February 2016 the delegation had sought an audience with the Turkish minister of Justice to engage him on the question of the resumption of the peace talks and seek his permission to visit Imrali prison to engage with Abdullah Ocalan on the same issue. Until today no final answer has been received from Mr Bozdag to the official request. Therefore the delegation called upon the Committee for Prevention of Torture and Inhuman or Degrading Treatment or Punishment (CPT) to visit Imrali prison as a matter of urgency to investigate why CPT’s recommendations in their last report (dated January 2013) have not been implemented.

During the meeting with representatives of the CPT, Essa Moosa – Judge of the High Court of South Africa (retired) – proposed to re-open the procedure under article 10(2). The CPT representatives promised to convey the appeal to the commission and come back with an answer.

“We wanted to beat the drums of peace, while Turkey is beating the drums of war” delegation leader Judge Essa Moosa said on the meetings with Political Groups, Country Representatives, rapporteurs and different committees

The delegation had also meetings with members of the Parliamentary Assembly of the Council of Europe (PACE), with political groups, country representatives and different committees. An eyewitness from the delegation testified on the devastations of the ongoing war in South East of Turkey in which hundreds of civilians HAVE died and thousands have been displaced. The delegation stressed that if the current conflict, as a spillover from the Syrian civil war, escalates further the ramifications would have grave consequences. More people in the Middle East will be pushed to flee for Europe. It was also pointed out that the Kurds are the only reliable force on the ground fighting ISIS, while Turkey has an ambiguous positions towards Islamic fighters. In this context to resume the peace process is a matter of urgency and Ocalan, as a moral leader of the Kurds, has a crucial role in this. This fact was underlined by the 10,3 million signatures requesting the Freedom for Abdullah Ocalan which were presented to the Council of Europe in February 2014.

The credibility of the Council in upholding the European Convention of Human Rights was discussed vis a vis the basic human rights of Ocalan as a prisoner to have access to his lawyers and visits of his family which has not been the case since more than 4 years and 15 months respectively. Furthermore the de-listing of the PKK has been mentioned as a factor to de-escalate the conflict.

Members of the Imrali Peace Delegation said they are looking forward to the responses on the issue of peace raised during their visit, in particular the answer of the CPT to their call to visit Abdullah Ocalan in Imrali prison.

The Imrali Peace Delegation first met in Istanbul in February 2016 – it was initiated by Prof Kariane Westrheim (chairperson EUTCC) and leaded by Judge Essa Moosa, a former lawyer of Nelson Mandela.