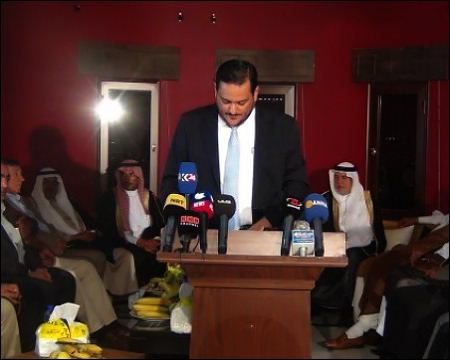 QAMISHLO, Syrian Kurdistan,— Ruspis Assembly of Arab Tribes in Jazeera (Cizîr) Canton in Syrian Kurdistan has condemned the Amnesty International over its report on alleged “forced displacement and home demolitions suffered by civilians under the de facto control of the Autonomous Kurdish Administration led by the Partiya Yekîtiya Demokrat (Democratic Union Party, PYD)”.

The Assembly said the Amnesty International report was partial and based on a lie distorting the truths.

Ruspis Assembly of Arab Tribes – which include Al-Jahish, Al-Begara, Al-Niem, Al-Sherabi ve Al-Shmer- and Ishaq Aziz and Tony Kiso on behalf of the Syriac people held a joint press conference in Himo village of Qamishlo and strongly condemned the report involving heavy insults against the YPG.

The press release, read by the Assembly’s official spokesperson Eyad Mihemed El-Dexîl, underlined that; “Amnesty International has grounded its report on sources that want to eliminate the love and co-existence among all social circles of the region and replace it with enmity.”

The joint statement recalled that the Amnesty International report dated 12 October, 2015 highlighted a series of alleged abuses and war crimes such as “forced displacement, demolitions and confiscation of civilian property”.

‘We strongly condemn the report by amnesty international’

Describing the mentioned allegations on the forced displacement of Arab people by Kurdish YPG-YPJ forces as a lie far from reality, the Ruspis Assembly of Arab Tribes in Jazeera Canton strongly condemned the report, and underlined that; “The Arab, Kurdish, Christian and Yazidi peoples in our region have been living together in peace and mutual trust for centuries. They share each other’s sorrow and joy, and everyone has their rights.”

The statement stressed that Amnesty International should have rather talked to the people in the region about the incidents if they really aimed to learn about the reality there. It also noted that the Assembly of Arab Tribes have talked to the region’s people about the allegations, who also refuted the claims mentioned in the report.

Recalling previous reports by some media organisations that voiced similar accusations against YPG-YPJ forces, the Assembly said the local people had once again refuted those allegations and described them as a lie when they were asked about their trueness.

“For instance, we had previously received reports that YPG-YPJ and asayish (publis security) forces had expelled our Arab brothers and sisters from Mount Kizwan. As the Begara tribe and Ruspis, we formed a delegation and visited the YPG-YPJ forces. During a meeting that lasted for four hours, we discussed about the allegations. We later talked to the people as well. After our talks, we decided to ensure the discharge of our people from the area of Mount Kizwan because it was witnessing heavy clashes with ISIS gangs and the people there had no security of life as the enemies were not discriminating between civilians and combatants while they launched attacks. This is a reality. Amnesty International should obtain information from the source itself and have it confirmed. YPG-YPJ forces faced similar baseless allegations also when our Assyrian brothers and sisters migrated from villages in Xabur region. However, the truth revealed itself when we talked to the local people who told that ISIS gangs had forced them to migrate and demolished their houses.”

‘It is not ypg but isis gangs that ruin the region’

Confirming the presence of a demolition suffered during the war and conflict in the region, the Assembly said this was however caused by not YPG-YPJ forces as is claimed by Amnesty International, but by ISIS gangs. “It is known by everyone that ISIS gangs blow up houses and lands and lay mines while fleeing an area. This is a reality that has been witnessed in many regions of Syria and Iraq. Amnesty International has grounded its report on sources that want to eliminate the love and co-existence among all social circles and replace it with enmity.”

‘Amnesty international based on fictional characters’

Defining the so-called sources mentioned by Amnesty International as “fictional characters”, the Assembly underlined that Arabs, Kurds, Christians and Yazidis in the region came to terms on unity and fraternity at the very beginning.