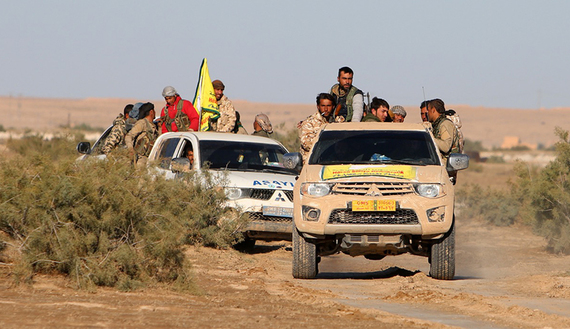 KIZILTEPE-MARDIN — In October 2015, Kurdish, Arab, Turkmen and Christian military factions came together to form the Syrian Democratic Forces in northeastern Syria. In their first offensive against the Islamic State (IS), launched Nov. 16, they took control of the town of al-Hawl, south of Hasaka province, after having taken Baret Khatounieh, in Hasaka’s countryside, on Nov. 12. They now have their sights set in part on the city of al-Shaddadi, considered to be IS’ most important stronghold in the province, where the extremist group’s forces receive military training. The objective of the battles raging south of Hasaka is to dislodge IS from the province and cut its supply route to Deir ez-Zor on one side and the al-Shaddadi-Iraq road on the other.

The forces’ original factions consisted of the Kurdish People’s Protection Units, Kurdish Women’s Protection Units, the Army of Revolutionaries, the Al-Sanadid Forces, Brigade Groups of al-Jazira, the Euphrates Volcano [joint] operations room, and the Syriac Military Council. Unlike the majority of military factions in the country, the Syrian Democratic Forces have more of a political character and view themselves as secular forces striving for democracy. They were assembled with US support as part of an overall plan to train opposition fighters. When Col. Patrick Ryder, the spokesman for US Central Command in the Middle East, announced Oct. 2 that weapons were airdropped to combatants in northeastern Syria to counter IS in the region, he was referring to these forces. Mere hours after the Syrian Democratic Forces’ formation, Pentagon spokeswoman Elissa Smith said that an operation was underway to back Syrians who would be fighting IS.

Col. Talal Silo, spokesman for the Syrian Democratic Forces, spoke with Al-Monitor about the coalition by phone Dec. 10 and 12.

Al-Monitor:  What is the purpose behind the formation of the Syrian Democratic Forces? How many units does it include, and what are the factions included?

Silo:  The Syrian Democratic Forces were established to fight terrorism and liberate eastern and northeastern Syrian territories from IS. They were initially composed of seven factions, not military units. Lately, 15 other factions have joined our ranks in the Azaz and Afreen regions of Aleppo’s countryside. The number of combatants fighting under the banner of the Syrian Democratic Forces is a secret that I cannot disclose.

Al-Monitor:  Reports indicated that 15 of Aleppo’s and Idlib’s revolutionary factions have asked to join the Syrian Democratic Forces. Was an official request made in that regard, and what is your stance vis-a-vis allowing new factions to join the coalition?

Silo:  Fifteen factions did join in Aleppo’s countryside, but nine of those were already key members of our coalition, meaning that only six new factions joined our ranks. We call on all military factions to join us, and we welcome them as partners in the Syrian Democratic Forces, as long as they believe in our goals and aspirations to fight IS.

Al-Monitor:  What are the main objectives of the Syrian Democratic Forces?

Silo:  The main goal revolves around fighting IS. Other objectives shall be decided by the seven-member general command of the Syrian Democratic Forces, which is authorized to adopt all current and future objectives.

Al-Monitor:  The Syrian Democratic Forces endeavor to retake al-Shaddadi [in southern Hasaka] from IS. Where does the coalition stand in that regard, and what is the strategic purpose behind controlling the town?

Silo:  So far, we succeeded in liberating al-Hawl and other regions. There is no such thing as the battle to liberate al-Shaddadi. What is underway is a campaign to liberate Hasaka’s southern countryside from IS. We are currently fortifying our positions and removing mines and explosive devices planted by IS in many areas. We will soon move forward with the campaign’s other [broader] goals, [like] to liberate al-Shaddadi, which we are currently not far from. Controlling al-Shaddadi aims to oust IS from the region and cut its supply lines with Hasaka and Deir ez-Zor. The international coalition’s support primarily revolves around coordination, locating strategic IS positions, providing air cover for our troops and targeting main IS strongholds by air.

Al-Monitor:  What is the extent of the support that you are receiving from the US and the coalition against terrorism that the [United States] leads? In addition to coordination, how are they helping you combat IS? How important is their contribution in this fight, and are they also providing you with financial support?

Silo:  The US and the international coalition are providing full military backing and support through aerial targeting of IS strongholds, in coordination with our troops on the ground, as well as assistance that greatly contributes in attacking important IS targets and ousting the latter through airstrikes accompanied by ground assaults from Syrian Democratic Forces troops. As for the quantity of arms that have been provided, I can only confirm receipt of the 50 tons delivered at the onset of support in October 2015.

Al-Monitor:  Are you concerned that receiving US support will unleash accusations concerning your objectives or comparisons with Iraq’s Sahwa [Awakening] forces?

Silo:  Our alliance with the US and international coalition forces aims to combat the terrorism that has spread throughout our region. We fear no accusations, for all civil, political and military forces in Syria are backed by the West, foreign, international and regional entities, from Turkey to the Gulf states and others. As a result, any such accusations are pointless.

Al-Monitor:  Do you have plans to march on IS-controlled Raqqa, and do you expect the Syrian Democratic Forces to advance in Raqqa at some future date?

Al-Monitor:  You recently said, “As we advance on the ground, we will establish local civilian and military councils to govern these deliberated areas.” How will those councils be formed? Will they fall under the purview of the Syrian regime?

Silo:  Local civilian councils were formed in all areas that we control. For example, after the town of Tel Abyad in Raqqa province was liberated from IS, a council of elders composed of Arabs, Kurds, Turkmen and Armenians was established. Regions that are liberated and freed from terrorism will witness the formation of civilian councils to govern them. Our goal is to help those inhabitants who prefer us over IS. In some areas, we were unable to allow the return of inhabitants due to the presence of mines planted by IS before its ouster.

The regime does not control any regions or councils in the area because it did not partake in efforts to liberate them and has no connections with the councils or military forces present therein. Therefore, any liberated areas shall fall under the purview of the Syrian Democratic Forces’ command.

Al-Monitor:  Some Syrian opposition forces, such as the Syrian National Coalition and other revolutionary Syrian factions, accuse you of being in the service of the Democratic Union Party’s self-rule aspirations. How do you respond?

Silo:  ​We will not respond to every accusation leveled against us. Our policy is clear and explicit: It revolves around combating terrorism and liberating land from IS. It is premature to talk about self-rule, which we have not even considered, yet accusations are made. On Dec. 8 and 9, a conference that included Kurdish, Arab, Turkmen and Christian political factions, in addition to the Syrian Democratic Forces, was organized in the city of al-Malikiyah, located in the Syrian province of Hasaka, leading to the establishment of the Democratic Syria Council, the political front for the Syrian Democratic Forces.

Al-Monitor:  Keeping in mind the recent events in Paris, do you think that IS is expanding globally, and what about its expansion in Syria?

Silo:  IS’ terrorism is not constrained by borders. We are fighting IS on behalf of the whole world, which is afflicted by IS’ terrorism. As for [its] expansion, I think that on the contrary, IS has suffered great losses in Syria, particularly in areas where Syrian Democratic Forces waged campaigns against it. Following the Paris incidents, we issued a statement in the name of the Syrian Democratic Forces, expressing our solidarity with the French people and government. [We also] affirmed the fact that terrorist attacks endangered humanity as a whole and that IS had become an extremely dangerous global terrorist threat, the confrontation of which required concerted international efforts. We shall continue to wage a war against this terrorism until its demise.

Sardar Mlla Drwish is a Syrian journalist working in written, audio and electronic media. He holds a degree in media from Damascus University.