Behind the barricades in Nusaybin – Toon Lambrechts 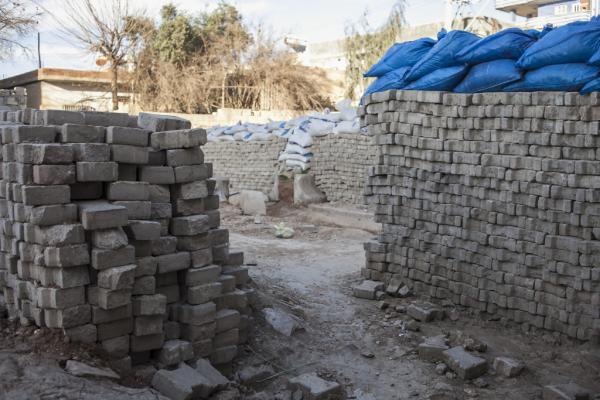 Besides the makeshift barricades the young Kurds have carved ditches, dug tunnels and hung cloths as sniper curtains.   © Toon Lambrechts​

Nusaybin is likely to be the next battlefield in the struggle between the Turkish army and Kurdish militants. In the border town, plenty of digging to erect new barricades is going on in the neighbourhoods that have declared themselves autonomous. Because with the beginning of military operations in the neighbouring town of Idil, a confrontation comes closer.

At first glance there is little to worry about in Nusaybin. The streets of the Kurdish town just at the border with Syria are crowded as always, and in the old city centre there are even restoration works going on. But the military material amassedat the square in front of the police station suggests problems.

Like in most other cities in the Kurdish southeast of Turkey, some districts have declared their autonomy and are de facto under control of the YDG-H, the youth branch of the PKK. Barricades and trenches have been dug, in preparation of a stand-off with the Turkish police and army. Last November he governor announced a curfew after which skirmishes broke out, but later on, calm returned.

The first of these autonomous district is Zeynelabidin, within walking distance from the centre of Nusaybin. Paving stones were broken up and neatly stacked to barricades. Elsewhere, piles of sandbags serve as a barrier, a single street is closed with a burnt out wreck of a truck. The neighbourhood seems ready for a confrontation with the Turkish army.

Besides the makeshift barricades the young Kurds have carved ditches, dug tunnels and hung cloths as sniper curtains. The walls of Zeynelabidin are littered with revolutionary slogans, stencilled portraits of Abdullah Ocalan, the jailed leader of the PKK, and a myriad of abbreviations representing the names of the different fractions of the Kurdish freedom movement.

Despite all the roadblocks, the Zeynelabidin the district is not abandoned, although there are significantly fewer people on the streets than in the centre. The barricades still allow a passage. Children play in the streets, women carry to and fro with bags full of groceries because the stores have closed. The people behind the barricades are not really surprised by the presence of a journalist, but taking photos is out of question, a precaution not to let the images fall into the hands of the Turkish police.

On the other side of the river Jaghjagh lies Yenishehir, another autonomous district. The fighting of last year must have been a lot heavier here than in Zeynelabidin apparently. The bridge over the Jaghjagh is cracked up, and barred with a burned-out tanker. If I make a picture of the entire bullet-riddled vehicle, an old woman passes by and says something about Erdogan. Without any knowledge of Turkish nor Kurdish, it is clear that it is a curse rather than a blessing. The buildings on the other side of the bank are also sprinkled with bullet holes.

Barricades and trenches have become a part of everyday life, here in Yenishehir. A group of women and children lurks quietly in the shadow of one of the major roadblocks at the entrance to the neighbourhood. Some store even keeps its doors open, though most of them are closed. Yenishehir is significantly bigger than Zeynelabidin, with wider streets. Even these ones have been sealed off with barricades, but it’s hard to imagine how the stacked stones could stop the tanks of the Turkish army.

An inscription on a nondescript house in one of the side streets marks that a post of the Asayish hides behind the walls. The Asayish could be compared to a kind of civil police, citizen patrols which maintain order in the self-declared autonomous districts. It is one of the organisations set up by the YDG-H, in addition to the YPS, the popular defence units. The universe of Kurdish militant groups keeps expanding like an inkblot. But not all Kurds agree with the strategy and methods of YDG-H who brought the war to city centres, a war which can not be won.

Inside the Asayish station, about twenty young men and women gather in a small courtyard, hidden from the view by a sheet of plastic. The mood is relaxed, a coming and going of people. The courtyard is adorned with homemade decorations in the Kurdish colours – yellow, green, red – and a large portrait of Ocalan.

In everything it seems like what is happening in the autonomous districts is a copy of Rojava, Syrian Kurdistan. Not exactly surprising, since Rojava can been seen from here. Across the border, barely a kilometre further, lies Qamishlo, the largest city in Syrian Kurdistan where the PYD proclaimed autonomy several years ago. This Kurdish autonomy on the southern border of Turkey has become an obsession for the Turkish political and military leaders.

A virtually independent Kurdish region, shaped to the ideology of the PKK, and stretching across the entire southern border of the country, is their biggest nightmare.

The end of compromises

On several places, people are still setting up new barricades. At the ends of the district for example, four men are busy digging a trench in the hard, stony ground, to serve as a hide-out behind a barricade of sandbags. One of them wants to talk. He introduces himself as Ali Sher, not his real name of course. Sweat beads on his forehead. ‘Indeed, it is back-breaking work,’ he says, laying down his shovel for a moment.

Ali Sher counts off on his fingers. ‘My father is dead, my brother is dead. My uncle and his two children are dead. I lived in Istanbul, I had a girlfriend, I had a job. I left everything behind me and came here to fight. All those dead, I could not bear it anymore.’

Negotiating peace is no longer an option, according to Ali Sher. ‘For more than a century the Kurds have suffered under the yoke of regimes like here in Turkey, as well as in Iran, Syria and Iraq. It has to stop. Turkey is a dictatorship, there is no place for us Kurds. They do not accept us as Kurds and the rest of the world does not want to see us. Everyone in this town is Kurdish, yet children are taught in Turkish at school. One hundred years assimilation is enough. The time for compromise is over. All these negotiations have proved to be fruitless. If we want to be free, we will have to fight.’

‘They have heavy weapons, explosives, technology. I have only this’, says Sher, and reaches out to a pocket knife.

While we are talking an old woman brings a dish of rice for the diggers. We sit down to eat in the shade of a tree in the courtyard. As we enjoy the meal, an explosions sounds. ‘They have heavy weapons, explosives, technology. I have only this’, says Sher, and reaches out to a pocket knife.

That is slightly dramatised, a Kalashnikov stands in the corner. Yet, despite the relaxed atmosphere and the determination of young people like Sher, the strategy of autonomous neighbourhoods and barricades seems to wield disastrous results.

The YDG-H may have had a good look at the struggle of the Kurds in Syria, the context is completely different. Where the Syrian Kurds have been able to conveniently use the vacuum that the Syrian civil war left them, the Kurdish militants in Turkey are pitched against the largest NATO army in Europe.

If asked whether Sher is not afraid that Nusaybin will be a repetition of Sur, Cizre and Silopi, other Kurdish cities where the autonomous districts were brutally swept away by the Turkish army and where hundreds were killed, he repeats what he already said earlier. ‘I’ve seen so many deaths, even in my own family. What is left except the choice to fight? It’s just impossible for me, even unthinkable to sit back and do nothing. If I die here, then so be it.’