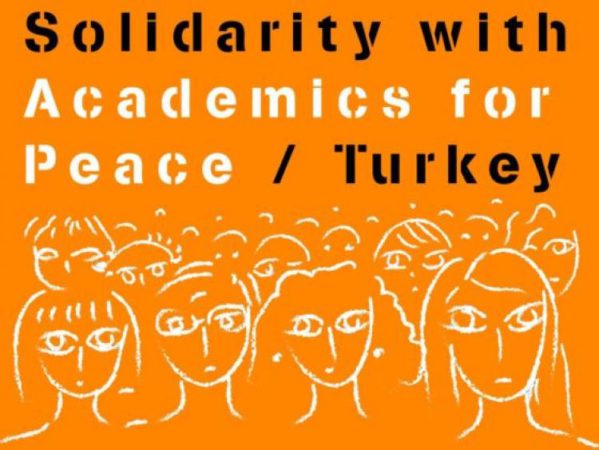 In January 2016, 2,212 academics working in or researching on Turkey signed a declaration calling on the Turkish government to end the war in the Kurdish region, seek a peaceful resolution of the decades-long Kurdish question, and allow international observers to monitor the situation in Kurdish towns and cities destroyed by security forces. Since then, the signatories, who came to be known as Academics for Peace, have been subjected to vindictive and punitive attacks ordered by the president, Recep Tayyip Erdoğan, and implemented through joint effort by the government and the higher education establishment.

The Academics for Peace have been accused with treason for calling on the Turkish government to end violence against its own citizens. Under instructions from the president, the government, the security establishment, the Higher Education Council and the university rectors have all joined forces to exact ‘a heavy price’ on Academics for Peace. The lynching campaign is still ongoing and has so far led to multiple waves of criminal and administrative investigations, detentions, dismissals, passport revocations and travel bans, denial of pension rights, and exclusion from the labour market through blacklisting of national insurance numbers.

Following the botched coup of July 2016 and the state of emergency in its wake, under the pretext of purging the loyalists of Fethullah Gülen movement, an ex-partner of the AKP regime that had also been complicit in the violations of academic freedoms and standards in Turkey, politically motivated attacks on academia and the whole public service sector in Turkey reached an unprecedented scale.  As of 30 April 2017, academic dismissals reached a staggering level at 5,295. This state of affairs demonstrates that the Turkish higher education system is used by the government and its political allies as a locus of patronage exchange and score settlement, disguised under the veil of academic endeavour.

The lynching campaign against Academics for Peace is in serious violation of the international standards of autonomy, academic freedom and doctrine-free knowledge production in higher education. An evidence-based but by no means exhaustive list of violations includes the following:

·       University Rectors encourage staff and students to spy on and incriminate academics suspected of a critical stance towards the government, particularly the signatories of the Academic for Peace declaration;
·       A young academic, Dr Mehmet Fatih Traş, committed suicide after his contract at Çukurova University was terminated and his job applications to several universities were turned down on the grounds that he is a security risk;
·       Graffiti on academic staff office doors, hate speech and criminal threats against critical academics have become wide-spread practices used and tolerated on- and off-campus;
·       Students supporting dismissed lecturers are persecuted and dismissed;
·       The Higher Education Council (YÖK) and the University Rectors work with, and upon instructions from, the National Intelligence Agency and the police to draw lists of academics to be dismissed;
·       Lists of dismissals are approved by the government and the President; and implemented via state of emergency decrees without the right for appeal;
·       The government-controlled publisher of academic journals (the National Academic Network and Information Centre – ULAKBIM) has instructed journal editors to remove Academics for Peace signatories from editorial and reviewer boards;
·       Conference organisers are excluding dismissed Academics for Peace from conferences, seminars and workshops under threats from and/or in collaboration with the government and higher education bodies;
·       The government-controlled Scientific and Technological Research Council of Turkey (TÜBİTAK) has: (a) terminated existing grants to and rejected funding applications by Academics for Peace; (b) terminated the scholarships to PhD students who signed the Academics for Peace declaration while researching in universities outside Turkey; (c) forced funded PhD students to submit statements on their research with a view to ensure that their research does not harm national interests; (d) forced Academics for Peace signatories to withdraw their names from published or under-review work that it had funded in the past; and (e) stopped printing books on the theory of evolution and has increased support for shady ‘research’ projects that champion creationism.