The Parliament of Catalonia recognized the existence of the Kurdish-led Autonomous Administration of Northeast Syria (AANES) in a resolution on Wednesday 20-10-2021 and urged Catalan institutions to establish relations with it.

According to the Kurdish Institute, this is a wonderful example of solidarity among 2 super-democracies. The stateless Kurds and Catalans have supported each other’s struggle for independence for decades.

The draft resolution voted by the Catalan parliament clarified: “Between Catalonia and the AANES, there is a close and strong link of international solidarity between Catalan social movements and civil society institutions. And that this network of popular solidarity between Catalonia and Kurdistan is an opportunity to explore and advance towards other forms of  reconstruction away from brutal capitalism” as stated in the text.

The co-chair of the Department of Foreign Relations in the AANES, Abdul Karim Omar, addressed on behalf of the Administration and the components of the region, including the Kurds, Arabs, Syriacs and Assyrians, with thanks to the Catalan people and the Catalan Parliament, which recognized the Autonomous Administration. 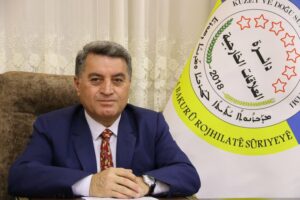 Omar explained that the AANES made great sacrifices in order to protect human and moral values, and to eliminate terrorism that was besetting the region and the world at large.

Omar stressed: “Catalonia’s position gives us a great impetus to continue the values ​​we believe in and adopt, and we believe that these values ​​are enough to build a democratic and decentralized Syria.”

The Kurdish Institute strongly hopes that many other parliaments and administrations will follow this example. We are not only looking forward to the International and European level, but we also invite federal and regional parliaments to undertake the same steps in our own country.

We invite you to read more details via de webpages of Kurdistan24.net, ANF News and Hawar News.