The Bureau of the Congress of Local and Regional Authorities of the European Council has issued a declaration demanding that all the means and needs be provided for the rebuilding of Kobanê, including a permanent corridor to be opened into the town. 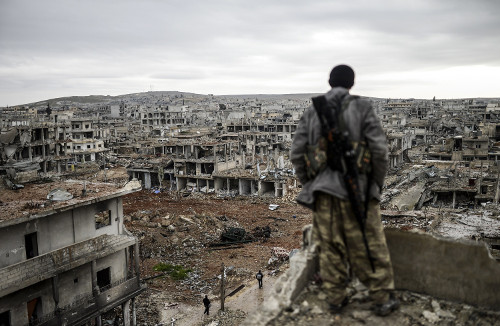 The Bureau of the Congress of Local and Regional Authorities of the European Council (CLRA) has issued a declaration demanding that all the means and needs be provided for the rebuilding of Kobanê, including a permanent corridor to be opened into the town.

CLRA called on in its declaration, voted today in its bureau meeting in Starasbourg, the member states, international agencies and the local governments to provide help for the reconstruction process of Kobanê.

In the declaration on Kobanê, the Bureau of the Congress

1. draws attention to the recent events in the city of Kobanê and its fight against extremism. The Bureau of the Congress deplores the devastation of the Kobanê area and the very difficult situation of the population, which currently has no access to electricity, water supply and sanitation, nor to sufficient food or other every day basic services. It underlines the enormous tasks facing the local government administration with respect to the protection of population, in terms of health and safety as well as the clean-up and reconstruction of the city;

2. wishes to express its solidarity and support with the population and local government administration of Kobanê as well as with the other cities in the region which have been and continue to be victims of extremism, and stresses the need for support from the international community;

3. acknowledges the important role that Turkey, as a member State of the Council of Europe and a neighbour of Syria, has played and continues to play in providing shelter to numerous Syrian refugees on Turkish territory and in providing humanitarian aid to the Syrian population, in particular through various corridors established along the border;

4. calls upon all member States and international partners to step up their support to UN agencies and to Syria’s neighbouring countries by extending humanitarian assistance to the Syrian population and rising to the challenges posed by this huge humanitarian crisis;

5. supports the request for permanent humanitarian aid corridors along the border to enable access into the Kobanê area;

6. calls therefore on the Turkish authorities to keep their border open with a permanent and safe corridor, and to allow free passage of all consignments of medicine and medical supplies as well as of essential foodstuffs, clothing and tonics for the civilian population, and to make free movement legally possible for the inhabitants of the region.