Nuriye Gülmen and Semih Özakça
Dismissed Academic and Teacher – On Hunger strike for 65 days
They want their jobs back.

Nuriye Gülmen and Semih Özakça are in the 65th day of their hunger strike with a simple demand: “I want my job back!”

Gülmen and Özakça are two education professionals among more than 7,880 academics and 150,000 public-sector workers sacked by the Turkish government without due process under state of emergency.

The Turkish government has also dismissed 383 signatories of the Academics for Peace declaration titled “We Will Not Be a Party to This Crime”. The declaration was signed by 2,212 academics and  called on the Turkish government to end the war in the Kurdish region; seek a peaceful resolution of the decades-long Kurdish question; and to allow international observers to monitor the situation in Kurdish towns and cities destroyed by security forces.

Academics, education professionals and public-sector employees are not only dismissed from their current positions but also excluded from the labour market by blacklisting their national insurance numbers. They are also deprived of pension rights and, in most cases, their passports are revoked. Under the state of emergency, there are no domestic legal remedies.

Nuriye Gülmen has become a symbol of peaceful resistance to political oppression under the state of emergency in Turkey. CNN International have described Nuriye Gülmen as one “eight leading women of 2016” in the world in December 2016 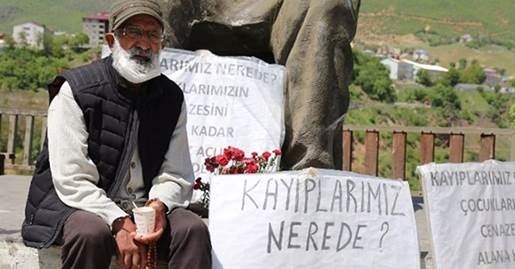 Kemal Gün (70) has been on hunger strike for 77 days to retrieve his son’s body for burial. His son was killed in an airstrike in Dersim, Turkey, on 7 November 2016. His demand for his son’s body is not met on the grounds that DNA tests are not completed yet.

While on hunger strike, Kemal  Gün has been fined with 227-TL (57 Euros) per day for sitting at the edge of a town square.

The hunger strikes have reached a critical stage, with serious risk of irreversible physical and mental health implications.

We, the London Solidarity Initiative, support Gün , Gülmen and Özakça. Their legitimate demands must be met immediately. We call on the UK government, the European Union, and all international organisations to pressure the Turkish government to lift the state of emergency and to meet the hunger strikers’ legitimate demands. We also call on the international public to pressure their representatives and governments to take decisive action against a dictatorial regime whose violations of basic rights and freedoms have been documented by the United Nations, the Council of Europe and international human rights organizations. Finally, we call on the media to report the hunger strikes and help breaking the silence that emboldens the dictatorial Turkish regime at the gates of Europe.

Your voice has touched our hearts, minds and consciousness.