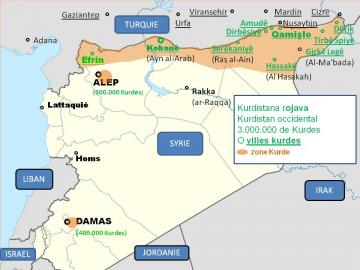 Headlines
•    People Protection Units (YPG)
•    Self–rule administration delegation in Europe
•    Hekmia camp in Derek region
•    Democratic Islam conference
•    Miscellaneous NewsEducational and Cultural Activities
Details
People’s Protection Units
Kobani- Five mercenaries affiliated to ISIS have been killed as a result of the clashes in the eastern villages of Kobani province after the trial to attack the Kurdish villages. Moreover, a mine was exploded while those groups were trying to plant it in the western villages of the province; a number of mercenaries were killed and injured.
According to local sources, the bodies of those mercenaries of ISIS have been transported to the city of Jarablos.
Sare-Kanye – YPG has destroyed a military vehicle loaded with Doshka machine gun during the bombardment of mercenaries in Rawya village – Sare-Kanye, after the mercenary attack on YPG sites.
YPG has declared that mercenaries groups have opened fire on their positions around Rawya village, prompting YPG forces t to respond to them with fire and heavy weapons.
Self –rule administration delegation in Europe
Dusseldorf – Self-rule administration delegation from Rojava (Al Jazeera canton) have arrived to Dusseldorf airport in Germany in order to do some meetings with European officials who invited them to meet up with them.
Salih Kado has declared that the reason of their visit to Europe is ‘’Diplomatic pretext in order to do meetings with European parliaments, European human rights and humanitarian organizations and to discuss the current situation of Rojava’’. Noting that the delegation has received a diplomatic formal invitation.
Hekmia Kamp in Derik region
Derik- Hekima Kamp in Derek has hospitalized the first batch of refugees from different regions of Rojava.
The relevant committees has distributed aids to families, the committees has also distributed relief materials, accessories and household products such as mattresses and blankets, as well as food and baby milk and other supplies.
Delegations of humanitarian organizations such as IRC organization, Doctors without border and Red Crescent foundation have visited the camp and expressed their readiness to refugees of the camp.
Democratic Islam conference
Amed – Sheikh Mohammed Daher chief of the religious affairs in the province of Kobani has severely criticized the Turkish PM saying: if you have one obligation toward Gaza-Palestine, you should have had two obligations toward us, because we have the same religion and neighbor at the same time and in Islam neighbors should take care of each other’s.
Above speech came out in the second day of the Democratic Conference of Islam which called by Kurdish leader Abdullah Ocalan. The conference was attended by 300 religious men who came from all parts of Kurdistan, Turkey and Europe. They called for releasing the Kurdish Leader ‘’Abdullah Ocalan’’.
Miscellaneous News
Efrin – The Turkish army still going on in targeting the Kurdish civilians on the border by shooting them.
Kobani – ISIS armed grops has stopped two buses in Munbej city and kidnapped 30 passengers from Kobani city who were going to Aleppo city.
Educational and Cultural Activities
Hassake – The National Kurdish Confederation have organized a seminar about Jaladet Baderxan life and Hawar magazine.
Teltamer – Assyrians have celebrated the birth day of St. Mary’s when is in 15th May, the event was in Telnasri village south of  Teltamer town.