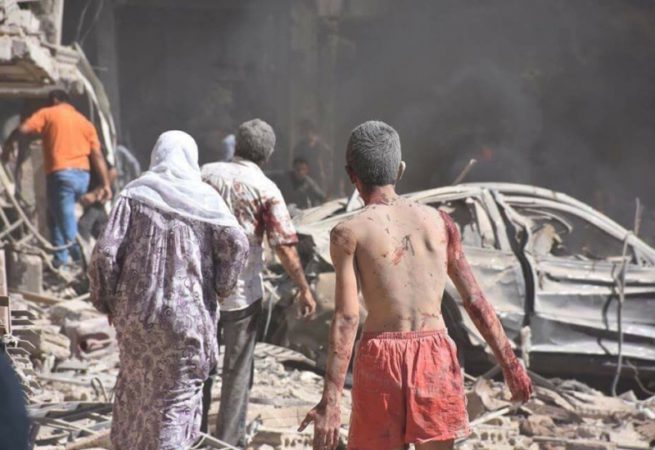 The blast in Qamishli was so powerful that it shattered windows and caused minor injuries across the border in Turkey. It was followed by a second motorcycle bomb a few minutes later, the Associated Press reported.

A strategic border post under joint control of Syrian government forces and Kurdish fighters, the town has been targeted by Isis several times before, although this is the deadliest bomb assault yet.

A suicide blast killed six members of the Kurdish internal security force, known as the Asayish, in April. In July, an Isis suicide bomb killed at least 16 people in Hasaka.

Suleiman Youssef, a writer and Qamishli resident, said that he heard the first explosion from a few miles away. He said the blasts levelled several buildings to the ground, and that many people were trapped under the rubble.

“Most of the buildings at the scene of the explosion have been heavily damaged because of the strength of the blast,” he said.

The predominantly Kurdish, US-backed Syria Democratic Forces has been the main force fighting Isis in northern Syria. It has captured significant territory from the extremists in the past two years.

Wednesday’s explosion came as US-backed Kurdish forces pressed ahead with their offensive to take the Isis-held town of Manbij, to the east of Qamishli in Syria.

Meanwhile, the Syrian army said it had cut off all supply routes to the eastern, rebel-held part of Aleppo.

An advance by pro-government forces around the only remaining supply route into the eastern sector this month enabled them to fire on it at close range, making the battlefront Castello road too deadly to use and putting at least 250,000 people in rebel-held districts under siege.

The Syrian Observatory for Human Rights said the eastern parts of Aleppo had been under effective siege since 11 July, and that advances in recent days by pro-government forces had strengthened their control of the only route into the city.