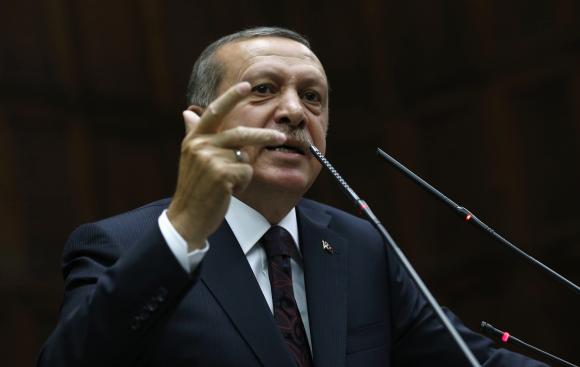 Turkish President Recep Tayyip Erdogan’s statements about the Syrian Kurdish city of Kobani, under a weeks-long siege by the Islamic State (IS), may have been mind-boggling but they all have the same objective: to sideline the Democratic Union Party (PYD), Rojava’s main political actor, and its armed wing, the People’s Protection Units (YPG). For Erdogan, both are terrorist groups and an extension of the Kurdistan Workers Party (PKK).

Over the last two years, Erdogan has tried to use the “Kurds versus Kurds” card in Rojava, seeking to bring the Iraqi Kurdistan leadership into play in the region. In the past few weeks, he has given the green light to Iraqi Kurdish peshmerga to cross to Rojava via Turkey, after which he made two intriguing statements.

First, he claimed the PYD had accepted an offer by former Free Syrian Army (FSA) commander Abdul Jabbar al-Aqidi to send 1,300 fighters to Kobani to help fight IS. His statement was firmly denied by the PYD, YPG and FSA.

Second, Erdogan implied that Kobani, officially called Ayn al-Arab, was not a Kurdish but an Arab settlement. For a president to step into a controversy over the name of a location with diverse ethnic and civilization heritage is not only an unusual stance but also an obvious attempt at political manipulation.

When it became obvious that the dispatch of peshmerga to Kobani — a force of some 200 people slated to stay away from the front line — would fail to produce the results Erdogan desires, the Arab card came into play. The report about the FSA’s intention to send fighters to Kobani was carried only by Al Jazeera, while other details came not from international agencies but from Erdogan himself. During a trip to Estonia on Oct. 24, the Turkish president offered a striking piece of information: “The PYD has just said it agrees to [the dispatch of] 1,300 men from the Free Syrian Army.”

Al Jazeera had reported that six “FSA-linked groups” — Islamic Front, Al-Sham Legion, Syria Revolutionaries Front, Fifth Legion, Hazm Movement and Mujahedeen Army — had agreed to send fighters. Most of those groups have no organizational links with the FSA. Aqidi himself had resigned from the Aleppo Military Revolutionary Council in 2013. Though it was unclear in whose name Aqidi was speaking, the Turkish media jumped on the Al Jazeera report. PYD leader Salih Muslim denied the story, telling Reuters, “We already established connection with the FSA but no such agreement has been reached yet as Mr. Erdogan has stated.”

The PYD’s representative in Europe, Zuhat Kobani, for his part, told Al-Monitor, “Yes, there was a discussion on the issue between the YPG and Aqadi. The meeting took place in the border region [the Mursitpinar border crossing near Turkey’s Suruc town]. You know that FSA-linked groups are already fighting in Kobani as part of the Euphrates Volcano Joint Operations Center. If the FSA wants to help, they can open a front against IS in Jarablus. There is no need for them to come to Kobani.”

And a source from the Syrian National Coalition told Al-Monitor by telephone, “There is no FSA decision [to send fighters to Kobani]. Aqidi quit the leadership of the Aleppo Military Revolutionary Council in 2013. Hence, he can speak only for himself. Of course, he could well gather 1,300 fighters, provided he gets financial support and weapons. Aleppo is much more crucial for the FSA. The regime’s offensive [there] has intensified, so the FSA cannot send troops to Kobani at such a time. Moreover, IS has begun to threaten Aleppo again.”

The FSA’s Aleppo Military Council commander, Zaher al-Saket, also denied any plan to send fighters to Kobani in a Facebook message that read, “Are we as foolish as to send troops to Ayn al-Arab and leave Aleppo to the dogs? The [Bashar al-] Assad forces are watching out for an opportunity to seize the opposition-controlled areas. There is no coordination between the Military Council and Aqidi.”

Basically, Erdogan insists that supporting the PYD is unacceptable but that the peshmerga or the FSA can go to Kobani. His attempt at publicizing Aqidi comes with some unpleasant connotations. Aqidi had displayed the most hostile attitude against the PYD and the YPG while he was in FSA ranks. At a gathering in Aleppo in August 2013, he hurled threats at the YPG, which he referred to as “the PKK,” saying, “There will be no mercy. We’ll root them out if we get the opportunity.”

Aqidi’s readiness to go to Kobani must mean more than just fighting IS, unless he nourishes hope of getting weapons and money by siding with the YPG, which enjoys US support. His moves, however, should be analyzed in light of Erdogan’s assertions over the past two years that “the PYD’s unilateral declaration of autonomy [in northern Syria] is unacceptable.”

As the controversy over the FSA and Kobani simmered, Aqidi said, “Kobani is part of Aleppo [governorate] and we are taking action in the name of preserving Syria’s integrity.” Erdogan, for his part, commented on Kobani’s name in a spirit no different from that of Aqidi. Asked whether Kobani was an Arab or Kurdish city, he said, “Its name, which is actually Ayn al-Arab, speaks for itself. It became Kobani later.”

The name “Kobani,” which the Kurds prefer to use, is not of Kurdish origin. It emerged in history as the site of a station built as part of the Ottoman railway project to link Berlin and Baghdad. Speculation is rife on the origin of its name. According to the most popular theory, sites with adequate water resources were selected as stations when the railway was constructed. A small hamlet south of what is now Turkey’s border town of Suruc was known as “Arap Punar” (Arab Spring) at the time. The station there was built by workers from Suruc. On their way to work, the workers would say they were going to the “Kompanie” — the German word for “company.” In time, the word evolved to “Kobani” and stuck with the populace. According to another theory related to the railway construction, a company name — “Ko. Bahn” — took hold as “Kobani” in the local vernacular. Yet, no company by the name “Ko. Bahn” appears among the builders of the railway, which include construction heavyweights such as Philipp Holzmann and Friedrich Krupp.

The Syrian state named the city Ayn al-Arab (Arab Spring) and the city was shaped by developments originating from Turkey. Settlement in the area intensified with the arrival of railway workers from Suruc. During the 1915 genocide, it became a safe haven for Armenians. Following the 1925 Seyh Said uprising, many Kurds who fled Turkey or were deported settled down in Kobani.

Even after the Syrian-Turkish border was demarcated Suruc, which lies on the railway route, continued to be the region’s center. Clandestine border crossings were so rife that Ankara’s complaints led the French ruling Syria at the time to set up an intelligence center in Kobani to ensure border control.

In the 1950s, when Turkey mined the border, Kobani was cut off from Suruc and began to develop as a city. Following Syria’s independence, the French intelligence building became the seat of the top local administrator. In 2012, when the Kurds took control of the region, they made the building the headquarters of Asayis, the Kurdish security force. And last month, this building — the city’s only historical structure called “palace” by the locals — fell into IS hands, and thus became the target of US airstrikes.

No matter whether you call it Kobani or Ayn al-Arab, the city — which has also Armenian heritage — signifies one indisputable fact: It is one of the junctures where the tragedies of Kurds and Armenians intersected in history. Kobani was a station for communities who fled, were expelled or emigrated from Turkey. Now this place has become the symbol of resistance against IS. Kobani is the talk of the world because it is resisting, not because it has Arab, Kurdish or Armenian heritage.

It speaks volumes that Erdogan — bent on not leaving Kobani to the Kurds and trying to place it under FSA control — has come to call the city Ayn al-Arab, the name it was given under the Arabization policy of the same Syrian regime he has seen as an archenemy since 2011.