For months already, heavy fighting wreak havoc in the Kurdish cities of Turkey, without any sign of appeasement, on the contrary. Yet, the Turkish government and the politicians of the governing AKP are already planning how to redraw the southeast thoroughly once the guns silenced. For the ravages of war offers the government an opportunity to redesign this rebellious region accord to their views. 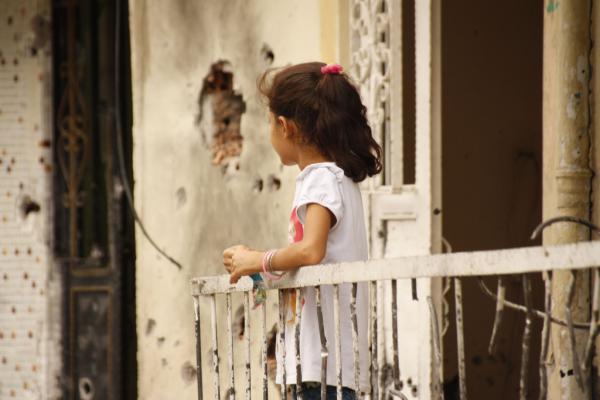 A young girl on the balcony of her house riddled with bullet holes in Cizre. The devastation in Silopi and Cizre is so big that entire neighborhoods will have to be built up from the ground. Rebecca Harms / Flickr (CC by-sa 2.0)

The first images of the cities Silvan, Silopi and Cizre that came out after the end of the curfew and the military offensive could have been taken in any given war zone.

Bullet-riddlen ruins, snapped concrete buildings, burned houses and streets blocked by rubble. Only the pro-Kurdish slogans painted over with Turkish nationalist tag lines recall that this is Turkey.

Meanwhile, in Sur, the historical centre of Diyarbakir, the fighting rages on. Shelling by tanks, artillery and rocket launchers claim lives every day and inflict severe damage to the ancient alleys of Sur, a city added to the UNESCO list of world heritage only last year. An estimated more than 1,500 historically valuable buildings and archaeological sites from different historical periods of Mesopotamia are crammed within the walls of Sur. Many sites such as the Assyrian Orthodox Virgin Mary church were badly damaged the last months.

Davutoğlu stated that Turkey ‘would let flourish a rose garden from the ashes’.

But however the extend of the loss of historically valuable buildings may be, nothing compares to the depth of human suffering caused by the war in southeastern Turkey on the population. The exact number of civilian casualties is not known to date, but certainly several hundreds of people lost their lives. It is claimed that some 200 000 people had to leave their homes. And with no prospect of an end of hostilities the number are adding on.

Therefor, the recent statements by Turkey’s Prime Minister Davutoğlu were met with surprise and disbelief. During a visit to the city of Mardin, Davutoğlu promised that the Turkish state would rebuild everything and compensate the victims. He stated that Turkey ‘would let flourish a rose garden from the ashes’. On a later occasion he promised the old town of Sur ‘would be restored as Toledo, a place that everyone will visit because of the architectural texture.’

The Turkish president Erdogan also speculated about what should happen once the military operations completed. It is clear from the statements of both AKP politicians that there are plans on the table for the future of the Kurdish region, plans that might be even more destructive than the war itself.

Not so very long ago, a solution to the decades-long conflict in the Kurdish region of Turkey seemed in sight. In 2005, Erdogan, then prime minister, took the stage in Diyabakir and called the Kurdish problem ‘also his problem’.

These days seem long forgotten, because on January 6 this year, he denied that in Turkey a Kurdish problem even existed, just ‘a terrorist problem.’

Yet on January 20, he came again with a “solution”, albeit of a different nature than the negotiations of recent years. Erdogan made it clear that ‘in the coming period, nor any separatist group or party, or any structure under their leadership qualifies as an interlocutor. That time is over. All their organisations, members of parliament and mayors will have to answer for their actions in court.’ Clear language, and in the meantime several mayors have already ended up in prison and the MPs of the HDP (pro-Kurdish party) are in danger to lose their immunity.

Many “pious Kurds”, in the words of Erdogan, are attracted by the Islamist agenda of the AKP.

But who will be at the table when the future of the Kurdish region in Turkey will be discussed? A brief statement by the spokesman for Erdogan late January clarifies some possibilities. He stated that a consultation will be held in the presidential palace. The Kurdish tribal chiefs and religious chiefs, the leaders of the village guard – government militias who fought in the nineties on the side of the army against the PKK – and some political groups would receive an invitation.

It looks like Erdogan gambles on the conservative segment among the Kurdish population. The Kurdish liberation movement in all its facets might be the most visible, they do not represent all Kurds. At the local elections in 2014, the AKP still got a lot of votes in the southeast. Many “pious Kurds”, in the words of Erdogan, are attracted by the Islamist agenda of the AKP. It was the anger over the Turkish indifference during the battle for Kobane which angered many conservative and religiously inspired Kurds and drove them in the arms of the left-wing HDP at the general elections of June 2015.

But the resurgence of violence after the attack in Suruç a month later put an end to this alliance. The HDP managed to jump over the electoral threshold, but only very narrowly. So there is again an empty space on the conservative side of the political spectrum in Kurdistan.

The new political model for the region envisioned by Erdogan seems to rely the conservative forces in the Kurdish society on the one hand, particularly the traditional chiefs and village guards, and religious leaders on the other hand. This last group was officially recognised – and paid – by the AKP, in line with its Sunni Islamist agenda. In the Turkish media, rumours are spread about the creation of a sort of Kurdish AKP branch.

The possibilities of ruins

It is doubtful if Erdogan gets the genie back in the bottle with his blueprint for a more conservative, more docile political and religious elite in Kurdistan. Many Kurds might disagree with the strategy of barricades and autonomous neighbourhoods pursued by the PKK youth, the excessive violence by the Turkish government is widely condemned.

The Turkish army uses blunt force to wipe out the self-declared autonomous neighbourhoods.

But these are not the only ideas to redraw the region. Because, in the words of Churchill, never let a good crisis go to waste. The Turkish army uses blunt force to wipe out the self-declared autonomous neighbourhoods. The destruction sometimes reminds of the war in neighbouring Syria. An extensive reconstruction will be on the table at one point.

That reconstruction offers the possibility to redraw the physical structure of the rebellious districts thoroughly to make them easier to control. Silopi and Cizre were devastated to such an extend that almost all districts will have to be built up from scratch. In Silopi, all existing urban zoning plans will be revised. Finished are the maze of streets and alleys where insurgents have the advantage of home.

Prime Minister Davutoğlu already lifted a tip of the veil in a speech after the termination of operations at Silopi. ‘We will set up a new security structure. There will be no more streets for the terrorists to barricade.’

He announced that the provincial capitals of Hakkari and Sirnak will be moved to other cities, respectively Yuksekova and Cizre, in order to, again in his words, ‘provide better public services and resolve weaknesses in terms of security and law enforcement.’

At a meeting on 5 February in the city of Mardin, the same occasion where he announced ‘to flourish rose garden’ a ten-point plan for the reconstruction of the southeast was presented.

There is an especially great concern about what will happen to Sur, given the historical importance of the city and its symbolic value for the Kurdish identity. Nevin Soyukaya, head of the Department of Cultural Heritage and Tourism of the Municipality of Diyarbakir has just returned from inside the city walls of Sur.

‘The conflict areas are off-limit to every one, but it is clear that the destruction and the depopulation are catastrophic.’

‘The conflict areas are off-limit to every one, but it is clear that the destruction and the depopulation are catastrophic. A few days ago the news came in that the old Armenian church was hit by an explosive. But regardless of individual monuments is all about the destruction of the city’s architectural texture, namely the streets and alleys. For ten years we have worked hard to restore Sur respectfully and to improve the living conditions of the residents, with the recognition by UNESCO as crowning glory. All those efforts are now lost.’

Already back in 2011, TOKI, the state agency responsible for housing, began with the demolition of plots within the walls of Sur. Fierce local opposition forced TOKI to stop, not without having carved empty holes in Sur. Later, the government declared some quarters to be risk areas in order to demolish them in an emergency procedure. The fear lingers that after the end of the fights, Sur will be declared a risk zone as a whole so as to give the central government a free hand without any local intervention.

Davutoğlu remained vague in his statement on the rosary. In contrast, the governor of Diyarbakir, appointed by the AKP, was much more outspoken about the future and came with the statement that TOKI would restore the historic buildings of Sur and would build luxury housing, along with tourist facilities.

It seems that the original inhabitants of the impoverished Sur have no place in these plans. Thereby the Turkish government kills two birds with one stone. Such a plan would create an enormously valuable real estate and at the same time replace the rebellious population of Sur by more law-abiding residents.

Nevin Soyukaya fears the worst, if this plan could ever become reality. ‘A city is a living organism. What will you do with a rose garden without people?’

‘We expect that the central government will try to rebuild Sur and in the same time replace the population by a more docile one.

‘We expect that the central government will try to rebuild Sur according to their own views and in the same time replace the population by a more docile one. In that case, the whole social and cultural wealth of the city will be lost. It will be the death of Sur.’

Earlier urban renewal projects in Istanbul’s neighbourhoods Tarlabashi, Okmeydan and Sulukule show that this fear is not unfounded. In Sulukule, a Roma neighbourhood in Istanbul with a long history, the original inhabitants were expelled to make way for luxury housing.

‘Such a demographic shift would destroy the diverse identities of Sur’, says Soyukaya. ‘We Kurdish inhabitants of Sur share memories with the Armenians, the Assyrians and many others. With the city council, we have worked hard to bring this shared cultural memory back to life, despite the efforts of the state to to wipe out everything that does not fit within their ideology.’

‘Today, many residents have left the city due to the fighting. Besides the physical destruction, our common memory will be lost inevitably. If Sur’s residents do not return, then the city will lose it memories. This is not only important for Diyarbakir. Sur is not ours alone, it is a common heritage of mankind. If we lose Sur, we will all lose.