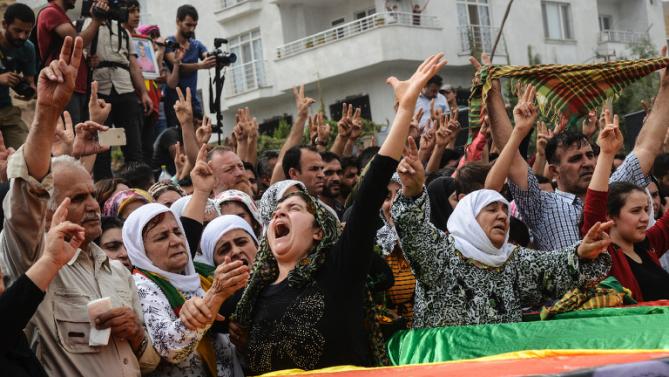 The European Commission against Racism and Intolerance (ECRI) is increasingly worried about the large number of violent attacks against Kurds, a report released by the ECRI said on Tuesday.

“ECRI is greatly concerned about the large number of violent attacks against Kurdish people, many of which are committed on grounds of the victim’s ethnic origin,” the ECRI said.

“Numerous attacks were directed against the pro-Kurdish Peoples’ Democratic Party and the resurgence of the security operations against the PKK has led to another new wave of violence,” the report added.

The EU commission said that Turkey should return to the Kurdish peace process. “It [ECRI] considers that the initiation of the Kurdish peace process in 2012 was an important step forward that could help in tackling this kind of racist violence, and deeply regrets that the end of the ceasefire with the PKK has led to a terrible new wave of violence,” the commission said.

Moreover the number of hate crimes against Kurds increased. “More, than 400 attacks were directed at offices of the pro-Kurdish Peoples’ Democratic Party (HDP) in 2015. These attacks included armed assaults, bombing and arson, and many of them were carried out during the election campaigns,” the commission said.

The commission is also worried about the situation of 1 million displaced Kurds in Turkey. “Many of them continue to live in substandard, illegally built housing and are at risk of eviction. While they benefit from a green card system providing free health, care, a lack of broader government support has hampered their local integration,” the report said.

The ECRI also expressed concern about the situation of millions of Kurds living in the southeast of Turkey. “These regions continue to be the ones with the lowest average household income and they are among the ones with the highest rates of poverty,” the report said.

“The situation again deteriorated sharply in the second half of 2015, owing to the renewal of the security operations against the PKK.

Inhabitants of this area are not only threatened with death or injury, but also suffer from curfews that are imposed for entire weeks, during which civilians are not even allowed to leave their homes to buy basic food or to receive emergency health care. As a result, many have had to flee their homes again,” the report said.

There is also a severe restriction on freedom of expression for Kurds in Turkey. Recently, 20 Kurdish academics and intellectuals have been arrested for signing a peace petition.

“Leading Kurdish politicians have been threatened with dismissal and arrest for allegedly acting as if they were members of a terrorist organisation. These threats followed statements, in which they had requested greater autonomy for the south-east but had not incited to or justified terrorism,” the report said.

“ECRI strongly recommends that the authorities ease the severe restrictions imposed by the security operations and the curfews in the south-east of the country, ensure that Kurdish and other civilians have access to food and basic services, the revive Kurdish peace process, respect freedom of expression and resume and intensify their positive action for the integration of the Kurdish minority group.”

Turkey’s army has been battling PKK in southeastern Turkey since the collapse of a 2-year-old ceasefire in July 2015, in which at least 338 civilians were killed according to Human Rights Watch.