It was revealed yesterday that an agent of the Turkish Intelligence Organisation (MIT) had turned himself in to the Austrian intelligence service where he reported on plans to attack Austrian politicians criticising the policies of the Turkish government.

Among those affected are former members of Austrian Parliament Berivan Aslan and Peter Pilz as well as S&D MEP Andreas Schieder. Ms. Aslan, who has been a moderator at EUTCC’s annual conference in the European Parliament, and Mr. Pilz, revealed some time ago how the Turkish Intelligence Organisation had set up a network of MIT agents in different parts of Austria.

Mr. Schieder clearly shows his solidarity with democratic forces in the region, especially with the Peoples’ Democratic Party HDP. Numerous political killings of Kurds in Europe, like the assassination of three Kurdish female politicians Fidan Dogan, Sakine Cansiz and Leyla Saylemez in Paris in 2013, show that the attack plans on politicians in Austria are to be taken seriously.

European states and institutions, above all the European Commission and the Council of Europe, must send a clear signal to Turkey. They have to protect their own politicians, show solidarity with the democratic forces in the region and take concrete and effective measures to stop the activities of the Turkish Intelligence Organisation in Europe.

The EUTCC express solidarity with all affected, in particular Mr. Andreas Schieder, a cooperation partner of the EUTCC Conference.

On behalf of the EUTCC board 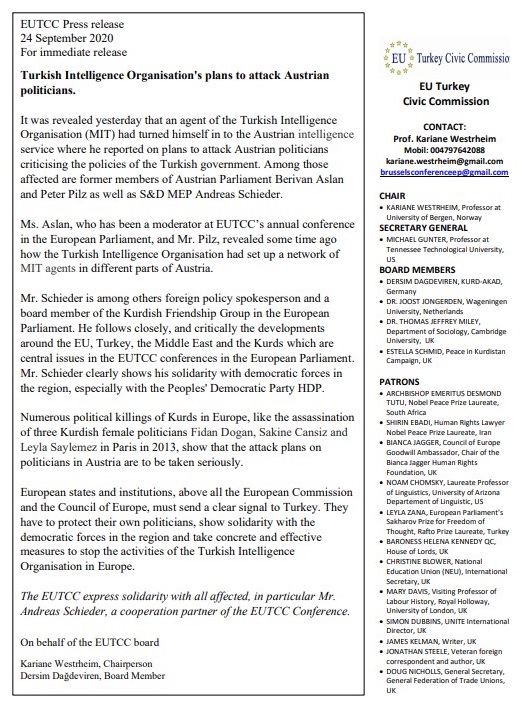