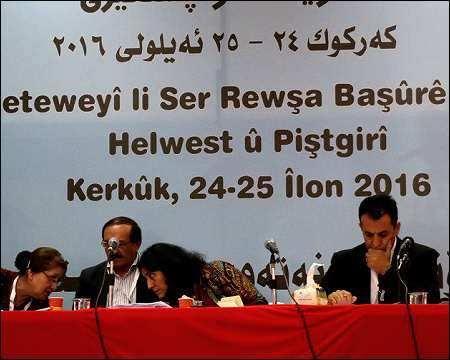 KIRKUK,— Final declaration of the ‘Southern Kurdistan Workshop’ Kurdistan National Congress (KNK) held in Kirkuk on September 23-24 has been released. In the final declaration, the activities of the newly formed commission and committee as well as the need to create solutions to the ongoing crisis and channel them to the society were emphasized.

Below are the articles of the declaration:

“1. Activation of the Parliament and respect for the sovereignty of Iraqi Kurdistan.

2. Systemization of the political administration and differentiation between the party and the government.

3. Separation of the national economy from parties and individuals, and formation of a joint treasury.

5. Creation of solutions to the ongoing crisis through the commission and committee, and channeling of these solutions to society.

6. Organisation of two more meetings for academics and presentation of the proposals of researchers, intellectuals and political parties in these meetings.

7. Reclamation of the salaries and aid that has been taken away from the people.

8. Protection of the rights and freedoms of journalists and social groups as well as the sovereignty of land.

9. Rejection of legal institutions’ control over individual rights and urban life, equal treatment of citizens, and elimination of differences.

10. Removal of the divisive borders established by colonialism on the lands of Kurdistan, and the opening of Sêmalka border gate between southern and western Kurdistan in this scope.

11. Participation of women and youth in all institutions and meetings, and prioritization of these groups in political decision-making structures.

1. Kurdistan National Congress must base on the following methods to further its diplomatic efforts serving Kurdistan:

– Strengthening of the Kurdish lobby abroad and in Kurdistan.

– Bringing the attention of international media to the works of Kurdish authors, researchers, journalists and artists.

– Establishment and management of a commission made up of Foreign Affairs representatives of different political parties.

– Establishment a commission of political parties for preparation efforts.

– Creation of a Kurdistani academic commission.

– When it is a matter of national interests in international agreements, a careful approach that takes unity as the basis must be adopted. Moreover, party interests should not be taken as the basis of foreign relations.

– Careful management of the government spokesperson office that will be established abroad.

– Gathering of documents on the massacres in Anfal, Halabja, Shengal and Feyli that targeted Kurdish people as parts of national history.

– Supporting Nadia Murad so that she represents all Kurdistani organizations on a straight basis.

– Establishment of a joint military force that will defend all the people and interests of Kurdistan.

– Permanent stationing of guerrilla and peshmerga forces in all the areas of Kurdistan that have been liberated.

– Provision of support and aid in the event of problems in any part of Kurdistan.

– Taking the participation of youth and women as the basis in representative structures.

1- Organization of the National Congress with the participation of parties from four parts of Kurdistan, with a focus on the history of these political parties.

2- This meeting by the KNK, which involves representatives from four parts of Kurdistan, could play an effective role in the gathering of the National Congress. This mission should be undertaken by a preparation committee actively participated of women and youth.

3- The self-power of Kurdish people should be taken as basis and the presence of foreign powers inside Kurdistan shouldn’t be allowed, such as the Turkish state presence in Southern Kurdistan and its occupation of Rojava and Jarablus.

4- In consideration of Kurdish People’s Leader Abdullah Öcalan’s role in the development Kurdish national unity and diplomacy, efforts should be made in Southern Kurdistan for his freedom.

6- Military forces made up of Kurdish women and men (peshmerga, warrior or guerrilla) have been the source of morale and trust across Kurdistan due to their fight against ISIS. They should be treated as the soldiers of entire Kurdistan and defend Kurdistan’s national unity in international politics.

7- Kurdistan Regional Administration should acknowledge and support the Shengal Assembly.

8- A conference should be held before the liberation of Mosul. Turkish state’s participation in the operation to liberate Mosul should be prevented with a national decision. The Turkish state that has occupied Northern Kurdistan intends to expand this occupation. In addition, it is the power that supports ISIS and other groups most effectively. They should not be allowed to do politics over the blood of Kurds.

9- Kurdistan National Congress (KNK) should work towards the recognition of the Kurdish identity of Kurdistan people living abroad and not allow their recognition as Turks, Iraqis, Iranians or Syrians.