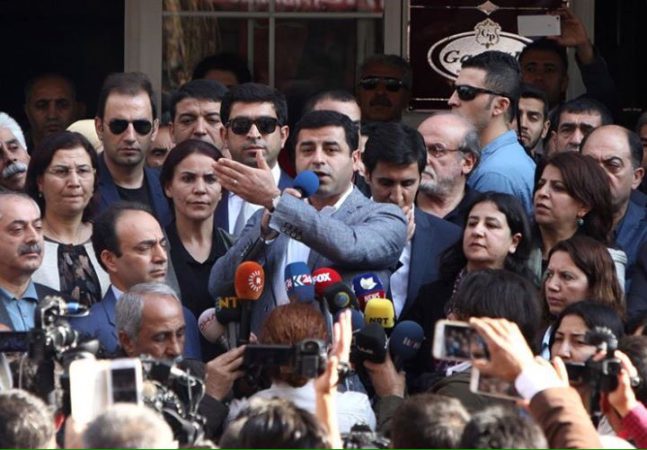 Demirtas addressing the public on the arrests of the co-Mayors of Diyarbakir (Amed) on October 27, 2016

One of the charges against HDP-co-chair Selahattin Demirtaş concerns the speech he gave in Diyarbakir (Amed) on the 27th of October 2016 after the unlawful arrest of the co-Mayors of the Municipality of Diyarbakir (Amed). After this speech the Diyarbakir prosecutor said in a statement the investigation into Demirtas would look into whether he insulted Turkish President Recep Tayyip Erdogan in this speech. The probe would also investigate whether he “incited people to disobey the law”, “publicly humiliated the Turkish Republic and the state’s judicial institutions” as well as “praised crime and criminals”.

Below is the full text of the speech mister Selahattin Demirtaş made that day and for which he was now arrested.

Apart from the truly ridiculous charges cited above, mister Demirtaş has something like 85 (!) other charges pressed against him in a clear attempt of the Turkish president to stifle the democratically elected political opposition.

Demirtaş: You are to give back the people’s will that you have stolen!

On behalf of my party I thank all of you for supporting the municipality since the first moment this unlawful practice began.

For last two days no internet connection is provided in any Kurdish city. Oppositional TV outlets are seized and confiscated. The journalists who are here with us now may be able to send their reports to their agencies in this hard conditions but prime-time news will probably not cover their reports due to the fear of Erdogan. So what are we going to do? We will  visit every house door to door, and tell what is going on. We will meet our peoples eye to eye, in person. They closed our media outlets, but they cannot blindfold us. We will not accept this as if it was an ordinary process.

Yes, no one is free to commit a crime, but a fair trial by an independent court is a must for us to appear before a judge in clear conscience. We are not afraid of standing trial, but jurisdiction is non-existent right now. We will not let the law commission of AKP judge us in court!

No one can criminate our municipalities to support terrorism. If you would like to produce such claims, first take a look at your own municipalities. Look at Istanbul mayor Kadir Topbas, look at Ankara mayor Melih Gökçek. It is not us who gave half of Istanbul and Ankara to Gulenists. There is no terrorist organization here but you! You nurture ISIS, you nurture al-Nusra.

If you can prove that a single dime from our city hall was sent to the Qandil mountain, let alone for Gultan Kısanak and Firat Anli, take us all! But it is not the truth.

We had been calling you (meaning AKP government) for immediate elections. But no more! Had you trust in yourself, we demanded immediate elections, do not assign your trustee mayors, we said. You should have had the courage when we called for the public vote. We do not demand elections now, instead you are to give back the people’s will that you have stolen.

That night Amed city councilors were blocked from the City Hall. Police was conducting a search unattended. This is the violation of law. This was not how you conduct a search in the municipality. No one knows what they were doing or planting in there. This was illegal.

Now their lawyers are forbidden to visit our mayors for 5 days. We have friends in detention for 19 days. They are waiting under detainment without being asked even a single question. Because there is nothing to be questioned. This is the situation.

We worked for peace day and night. We said “People do not need to die. They are all children of someone, they are humans. Let’s solve the problems by dialogue, by politics”. Even now, we say let’s have rallies, let’s get results within politics, but you also witness what’s happening. You (meaning the officials) are blocking these options. However, we will insist on politics till the end. A sane government would pave the way for politics. A sane government would pave the way for dialogue, instead of arresting co-mayors to disable guns and violence.

They may make us pay a heavy price, but have faith, this insanity will eventually fail.

From where the world stands, Turkey looks like a country of ISIS, and Erdogan like the Caliphate of ISIS. We are not responsible for this.

Well excuse us, we may lose our heads but shall not kneel (a traditional way of saying you are ready to pay a price than surrender). Just because he is finger-wagging from the palace, will we submit? No!

Everyone will take streets within their power. Without taking a step back, we will be in the streets until we get results. Never take a step back. However, while doing this, do not allow violence. We don’t need violence. This is as much legitimate as the people taking the streets on July 15 to stand up for their will is legitimate. We will reach our people house by house. We are running a campaign against the state of emergency, against those attacking our will. We will raise our voices wherever we are.

If there is going to be democracy and peace in this country one day, we will be those accomplishing them, and we will prevail by resistance, not by submitting.