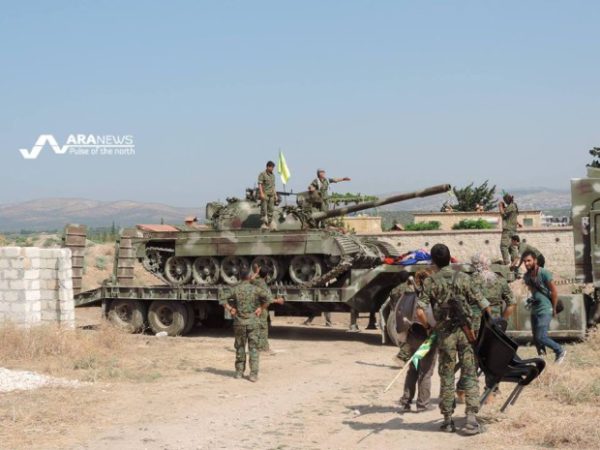 Artillery of the Turkish army on Wednesday hit the Kurdish town of Derbassiye in Syria’s northeastern Hasakah province, shutting down the road between Derbassiye and Serikaniye. Furthermore, clashes broke out between Kurdish fighters of the People’s Protection Units (YPG) and the Turkish military near the town of Afrin.

“The Turkish army is targeted the positions of the YPG in Derbassiye and our units responded to the sources of fire intensively,” said Abdulkarim Omer, head of the foreign relations office at the Cezire (Hasakah) canton.

“An armed Turkish soldier was killed and three others wounded when the YPG confronted the attack by the Turkish occupation army on Derbassiye,” he added.

“Continuing their aggression, the Turkish army and allied gangs shelled town of Till Rifaat and the village of Til Cibrîn in Shahba region,” the YPG said in a statement.

“The MMC [Manbij Military Council] declared its full support for YPG/YPJ forces against Turkish attacks, noting that Turkey aims to obstruct the fight against Daesh [ISIS,” the YPG added.

This comes a day after the Turkish jets killed over 25 Kurdish fighters in Iraq and Syria on Tuesday.

In order to protect the safety of the citizens, the Kurdish People’s Protection Units (YPG) cut off roads in the area of clashes between Derbassiye and Serekaniye.

“The YPG forces targeted a tank belonging to the Turkish army that was trying to enter the territory of Rojava,” he added.

Moreover, clashes took place close to the town of Efrin, but no Turkish air strikes were reported.

“We call on all forces to remain focused on the fight to defeat ISIS, which is the greatest threat to regional and worldwide peace, security,” said Air Force Col John L. Dorrian, Spokesman for the US-led coalition against ISIS.

“Turkish strikes were conducted without proper coordination with the Coalition or the Government of Iraq,” he said.

“Our partner forces have been killed by Turkey strike, they have made many sacrifices to defeat ISIS,” the American Colonel said.

“We are troubled by Turkey airstrikes on SDF and Kurdish forces,” he added.

On Tuesday, the Syrian Democratic Forces called on the international community to intervene to stop the Turkish attacks. “The regime in Turkey has consistently harmed the good neighborly relations through countless violations against our citizens and fighters in northern Syria,” the SDF said. “This was the most blatant attack of these crimes committed by the Turkish regime.”

“Therefore, we demand and appeal to the international community to intervene to put an end to this aggression and the ongoing violations on our territory,” the SDF concluded.