How a German doctor became a PKK hero – Amberin Zaman 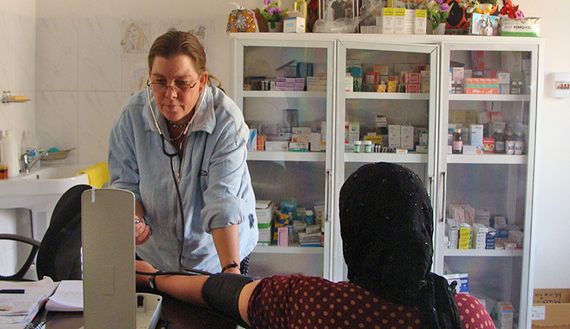 High in the Kandil Mountains separating Iraq from Iran, a German physician has become a beacon of hope for ailing Kurds across the region. On a sunny autumn afternoon, scores of women, young and old, squatted in a small clinic awaiting their turn for a free examination by the doctor, who goes by the code name of “Medya.”

“I can’t have children; it’s my hormones,” whispered Dilwaz Aziz, 20-something newlywed, stroking a hirsute upper lip. “I know Dr. Medya will help me.”

But “Dr. Medya” is no ordinary do-gooder. She is a full-fledged member of the Kurdistan Workers Party (PKK). The rebel group has fought on and off for Kurdish self-rule inside Turkey since 1994. With its Syrian affiliate, the Democratic Unity Party (PYD), it is leading the battle against the Islamic State (IS) in Iraq and Syria. Long before starry-eyed Westerners and assorted war junkies joined the Kurds’ fight against the jihadists, the general practitioner from Hamburg dropped a promising career to join the guerrillas in 1993.

In a rare interview, the brusquely amicable doctor told Al-Monitor that she discovered the Kurds in the late 1980s at the height of the conflict between Turkish security forces and the PKK. She said, “I had many Kurdish friends in Hamburg and decided to go to Kurdistan [southeast Turkey] in 1990. When I returned two years later, I saw that many of the villages I visited had been burned to ashes.”

The horrors endured by ordinary Kurds compelled Medya to join their ranks. “I saw a people who suffered a lot but never lost hope and knew what to do to achieve their aim, even if this meant losing their lives,” said Medya, whose nom de guerre corresponds to the PKK’s self-declared “resistance” areas in Iraqi or “southern” Kurdistan.

So for years, the burly Hamburger moved with rebel units inside southeastern Turkey and northern Iraq, bandaging limbs, extracting bullets and sewing up wounds as they came under fire from army helicopters and fighter jets. “I saw many of my friends die,” she recalled, her eyes narrowing to slits.

Home to around half a million Kurds, Germany is a vital source of “donations” (including funds extracted as “protection money”) and recruits for the PKK.

Medya is not the only German woman to join the PKK. Andrea Wolf, a leftist activist from Munich, joined the group in 1996 and was killed two years later in shoot-out with the Turkish army in the province of Van. Fellow fighters who found the 33-year-old woman’s naked body outside the cave where they had been sheltering said it had been badly mutilated, her breasts sliced off. Other guerrilla corpses had been either decapitated or burned. Their remains were uncovered in a mass grave in 2011 and the PKK erected a monument nearby in Wolf’s memory. It was promptly demolished under the local governor’s orders. Wolf’s portrait, prominently displayed in Medya’s consultation room, shows a blonde withshort hair, gray eyes and a generous smile.

Medya had her own brush with death when a guerrilla unthinkingly shone his flashlight on a wounded comrade shortly after an attack, prompting a fresh barrage of fire. Medya grinned, saying, “We crawled under some rocks. It was close.”

The German has not set foot outside the region for the past 21 years. “It’s not necessary” she barked. She speaks two Kurdish dialects, Sorani and Kurmanji, fluently, as well as Turkish, and is revered by PKK fighters male and female alike.

“One can only love and admire comrade Medya for her dedication to our cause,” said Cemil Bayik, the PKK’s top field commander, in an interview with Al-Monitor. “You do know that she speaks Kurmanji in the Guyi [tribal] style?”

Since beginning its armed fight in 1984, the PKK’s unusual cocktail of socialism, environmentalism and gender equality has attracted recruits from the world over. Never mind that the group is officially designated as “terrorist” by the US State Department and the European Union, “Russians, Australians — the PKK has many internationals,” said Zagros Hiwa, a rebel spokesman in Kandil.

This is because “the PKK represents one of the last ‘liberation’ movements around,” said Aliza Marcus, the author of “Blood and Belief,” a widely acclaimed book about the PKK. “Those who join love the Marxism and the image of the oppressed turning against what they say is a fascist state, the image of fighting in the mountains and the camaraderie.”

These days, Westerners seem to be more inspired by the Kurds’ battle against IS. “They are a completely different breed,” Marcus told Al-Monitor. Some, particularly Americans, tend to have had experience in the US military and cast the war against IS in religious rather than political terms. Jordan Mateson, the 28-year-old former private from Racine, Wisconsin, who made international headlines after joining the PYD’s armed wing the People’s Defense Units (YPG) told USA Today, “I couldn’t just sit and watch Christians being slaughtered anymore.”

Much like the PKK, the YPG welcomes recruits from all faiths. It even boasts an all-Assyrian Christian battalion called “Sutoro,” or “security” in Aramaic.

Back in Kandil, Medya said she no longer admits fighters at her clinic because their presence would make it a target, explaining, “We had another hospital where guerrillas and civilians were treated and the Turkish air force destroyed it.” The raids have virtually halted since a mutually observed if periodically violated cease-fire was declared by imprisonedPKK leader Abdullah Ocalan in March 2013.

Medya confided that her “biggest dream” is to meet Ocalan one day. For the first time, her expression softened. “I know it will happen. Nothing would make me happier,” she said.