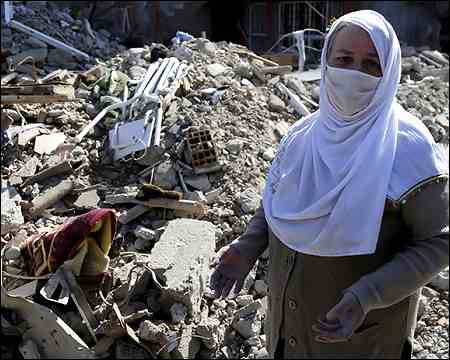 DIYARBAKIR-AMED, Turkey’s Kurdish region,— The Documentation Center of TIHV (Human Rights Foundation of Turkey) has released a fact sheet on declared curfews between August 16th, 2015 and March 18th, 2016 in the Kurdish region of Turkey.

Accordingly, between the dates August 16th, 2015 and March 18th, 2016 there has been 63 officially confirmed, open-ended and round-the-clock [all daylong] curfews in at least 22 districts of 7 cities in Southeastern Turkey.

These cities are as follow; Diyarbakır (34 times), Şırnak (9 times) ve Mardin (11 times), Hakkâri (5 times), Muş (1 time), Elazığ (1 time) and Batman (2 times). It is estimated that, according to the 2014 population census, at least 1 million 642 thousand residents have been affected by these curfews and fundamental rights of these people such as Right to Life and Right to Health are explicitly violated. According to the statement of Ministry of Health on February 27th, 2016, at least 355 thousand residents were forced to leave the cities and districts they lived in.

According to the data of HRFT Documentation Center, since August 16th, 2015 (which is the date of first declared curfew) until March 18th, 2016 at least 310 civilians lost their lives in regions and periods of time that curfews were officially declared. Besides, there are at least 59 bodies from Cizre that are buried without waiting for the identification process and at least 20 bodies from Sur are waiting in Forensic Medicine Institutions and these bodies are not included in the given data.

The reasons of why the last fact sheet of HRFT Documentation Center was published over a month ago on February 6th, 2016 and there are at least 79 unidentified bodies in this current fact sheet explain some of the violations of the times we are living in:

The imposition and results of open ended, round the clock (all daylong) curfews should be interpreted as a whole. As of December 11th, 2015 the impose form of continuous curfews, the broadness of regions that curfews are declared, length of duration, military dispatch and using heavy weapons within the residential areas and judicial processes in accordance with all these, made Right to Information and Right to Know the Truth which are under protection by the international conventions inaccessible.

While it is violation of rights by itself that hundreds of thousands of people were forced to leave their homes in districts where curfews are declared or have the worry of it; this also resulted in not being able to reach statements of witnesses as common as used be. Within this context;

– Some people whose bodies were reached are identified whether by their relatives or DNA pairings, yet the lack of knowledge and suspicions over the time, cause and manner of death are present.

– International documents such as UN Manual on Effective Investigation and Documentation of Torture and Other Cruel, Inhuman or Degrading Treatment or Punishment (Istanbul Protocol) and UN Protocol for Preventing Arbitrary Killings through Adequate Death Investigation and Autopsy (Minnesota Protocol) are violated by including claims such as not allowing the lawyers and independent forensic medicine specialists to be present during autopsies of most of the bodies; not delivering investigation files with especially the reports of examination of deceased and crime scene investigation to relevant people; not conveying copies of autopsy reports neither to relatives nor to lawyers; and bringing most of the bodies as stripped naked before the autopsy procedure. Within this period of serious violations a complete autopsy procedure became impossible, therefore reliable information couldn’t be obtained on people who lost their lives.

– As the integrity of most of the bodies are damaged identification was not able to be conducted, especially of the people whose bodies were taken from the in question basements of Cizre. Moreover, there has been changes on Regulation for Implementation of Forensic Medicine Institution Law on January 7th and 16th, 2016 and again on Regulation on Transfer and Burial of Corpses on January 16th, 2016 that allowed the bodies to be buried collectively to common graves or unknown places without waiting for the necessary period of time which made the identification process even harder.

Bodies of people who known or claimed to be dead whether identified or unidentified are still waiting to be sent to Forensic Medicine Institutions, due to ongoing military operations or even though the operations are declared to be done due to ongoing curfews. It is known that these bodies are not brought out of the curfew areas, yet reliable information couldn’t be obtained if there are any conducted investigations.

With regards to all these reasons, HRFT said this Fact Sheet that is open to any contributions and feedbacks, is prepared by the obtained information as of March 18th, 2016 and compared retrospectively with previous Fact Sheets of HRFT Documentation Center on curfews, and it includes detailed information on people who lost their lives if the identities and how they died is known. Besides, even though their cases are given on the part of this fact sheet over the detailed information on people who lost their lives, 8 people who were mentioned in previous fact sheets are excluded from the list of “civilians who lost their lives” due to strong claims of them being member of YDGH (Patriotic Revolutionary Youth Movement) or YPS (Civil Protection Units). Yet, the examination of whether the terms of extrajudicial execution occurred or not will be possible to make in consequence of effective investigation processes.

Also, it’s needed to be point out that “Right to Life” by definition involve cases of injuries which could cause the death of a person. Yet, mainly due to nonprogressive investigation processes and difficulty of reaching the witnesses by cause of aforementioned reasons and more, the possibilities to reach information over injured people are even more restricted. Therefore, this fact sheet only covers “civilians who lost their lives”.

In accordance with all these;

Between the dates of August 16th, 2015 and March 18th, 2016 at least 310 civilians lost their lives in curfew areas. Of these people; 72 are children, 62 are women, 29 are over the age 60. Besides, at least79 people are not included in these data due to the fact that the bodies are still waiting to be identified.

It is estimated that at least 76 civilians, whose information on how they died is obtained, lost their lives due to not being allowed to reach Right to Health.

Also, there are some facts that are not included in above mentioned data or to the list of civilians who lost their lives;

At least 79 bodies are whether waiting in Forensic Medicine Institutions to be identified or buried to common graves and to places that are unknown by their relatives with regard to changed regulations.

In Silopi district of Şırnak, a 7 months old still birth occurred due to gunshot through the womb of the mother. Also, at least 10 people lost their lives by arbitrary shooting of security forces during peaceful protests against the curfews in streets/Squares close to curfew zones or by the use of chemicals such as tear gas where no operation was onging or any curfews were declared.

Names of the People who lost Their Lives Between the dates August 16th, 2015 and March 17th, 2016 has been published by the TIHV body.