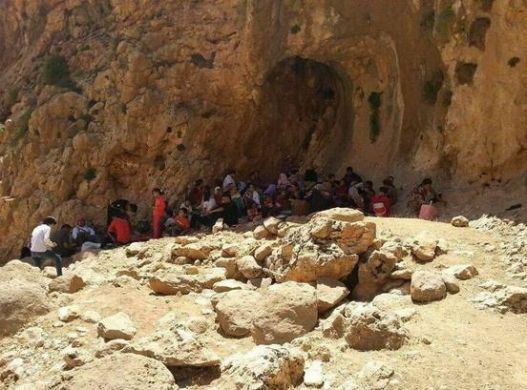 People in Sinjar have fled their homes and taken their way to Sinjar mountains following the occupation of city by ISIS (Islamic State of Iraq and al-Sham) gangs on 3 August.

At least six child have died of thirst in the mountains where people can reach no food or water.

On 3 August ISIS gangs entered and occupied Sinjar, leading to thousands of people fleeing their homes, after the town was abandoned to its fate by KDP peshmerga forces. People in thousands went to the mountains to protect themselves from the savagery of ISIS gangs.

On 4 August, YPG (People’s Protection Units) fighters reached the mountains of Sinjar to provide protection for the tens of thousands of people who fled there after facing the threat of being massacred by ISIS gangs. On the same day, YPG and public security (Asayish) forces broke the encirclement of the ISIS gangs in order to ensure the displaced civilians can reach Rojava.

According to the information obtained from the region, YPG fighters carried out an attack against an ISIS group on their way to the Sinjar Mountain, killing many of the gang members and seizing at least 6 weapons they used.

While YPG forces are  endeavouring to prevent probable massacres by ISIS gangs, the civilians stranded in the mountains are facing a human tragedy as they can find no food or water in the region after the ISIS occupation. Establishin a safe corridor in the area, YPG fighters are trying to ensure the civilians to safely reach West Kurdistan. At least 6 children are reported to have died of thirst so far.

On the other hand, reports are coming through about savage massacres of ISIS gangs in Sinjar town and villages where dozens of Yezidi Kurds have reportedly been massacred  in the last several days.

On 4 August, YPG forces began a clean up operation in the border area between West Kurdistan and South Kurdistan and Iraq. The operation is reported to be continuing as thousands of Ezidi youths have taken up arms and joined YPG forces to defend themselves in the face of brutal ISIS attacks.

Iraqi warplanes also carried out bombardment on ISIS positions in Sinjar on Monday. The ISIS gangs targeted by the attack are reported to have turned back to their position they left upon the bombardment. Gang groups are also reported to be raiding the houses and shops in the town.

In the meantime, HPG (People’s Defense Forces) guerrillas have also gone into action after PKK (Kurdistan Workers’ Party) Executive Committee Member Murat Karayilan said in an interview to Stêrk TV on 4 August that guerrilla forces have launced an operation in Sinjar. Karayilan also called on the KDP and YNK to ensure the joining of guerrilla, YPG and peshmerga forces.

In the evening of 4 August, Sinjar Units of Resistance announced their establishment while Kurdish forces entered the town.
ANF – SINJAR 05.08.2014