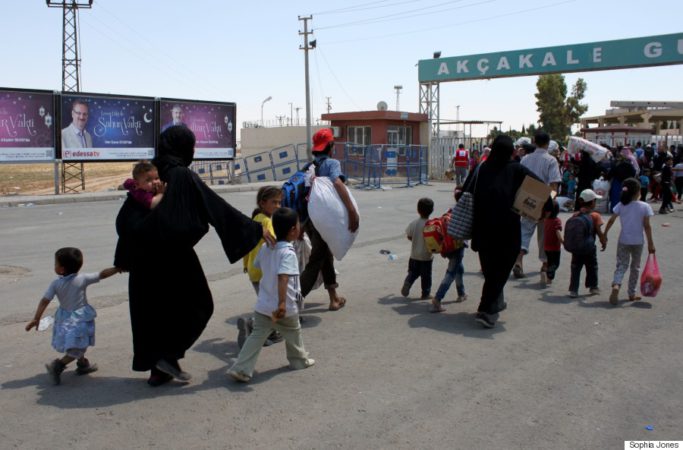 Syrians cross through the Akcakale border crossing back into Syria on June 17, 2015

AKCAKALE, Turkey,— Hundreds of refugees have returned to the border Kurdish town of Tel Abyad (Girê Spî) from Turkey a day after Kurdish fighters drove out Islamic State militants, media reported on Wednesday.

Some 400 men, women and children carrying their meagre possessions crossed back into Syrian Kurdistan through the Turkish border post of Akcakale, a day after Kurdish fighters backed by Syrian rebels took Tal Abyad.

Wednesday’s return came a day after Kurdish fighters from the People’s Protection Units (YPG) took full control of Tel Abyad (Girê Spî) in Syrian Kurdistan, dealing a major blow to the IS group’s ability to wage war in Syrian Kurdistan by cutting off a vital supply line to its self-proclaimed capital, Raqqa.

“I’m returning, I left my husband there. But I’m still very afraid of the bombs, how would someone not be afraid of bombs?” said Fahriye, a 40-year-old housewife.

“I’m also afraid of IS coming back,” she said.

“I’ll go and decide with my family whether we’ll stay or not.”

Mahmud, a farmer, said he too was eager to return home ahead of the Muslim fasting month of Ramadan, which begins on Thursday in Syria.

“We want to spend our holy Ramadan in our homeland. We have been looking forward to it.”

Inside the ethnically Kurdish town of  Girê Spî (Tel Abyad) on Wednesday, life was beginning to return, said Sherfan Darwish, a spokesman for the Burkan al-Furat rebel group that fought alongside the YPG.

“The local bakery in Tel Abyad was not functioning, so yesterday we restarted operations and we’re distributing bread to the residents who are coming back.”

He said Kurdish and rebel forces had carried out sweeps of the town to remove mines and car bombs left behind by IS jihadists.

“We’re doing everything we can and providing security to the best of our abilities.”

Darwish said similar sweeps were being conducted in recently captured villages near Tel Abyad, with villagers being asked to leave while searches were done.

The Syrian Observatory for Human Rights said YPG and rebel forces had asked residents of 10 villages in the area to leave their homes while searches were carried out.

The orders come amid accusations by some Syrian rebel groups and Turkey that Kurdish forces are seeking to “ethnically cleanse” Tel Abyad and the surrounding region of Arabs and Turkmen.

The YPG and their Arab rebel allies dismiss the allegations, and Darwish said villagers were being asked to leave for “an hour or two… just enough so we can search the villages.”

The Kurdish advance has sent some 23,000 people fleeing to Turkey to escape the fighting, the UN refugee agency said Tuesday.

Refugees who escaped clashes in Tel Abyad (Girê Spî) to find refuge in Turkey recall nervously what it was like to live under their former Islamic State (IS) rulers. Most are happy to be free of IS. But the mainly ethnic Arab refugees also worry what life will be like under Kurdish rule.

“It’s horrible to live under sharia rule, which bans pretty much everything,” said Halil el-Ahmed, 55, who fled to Turkey with his family of 15 after spending three nights in the open.