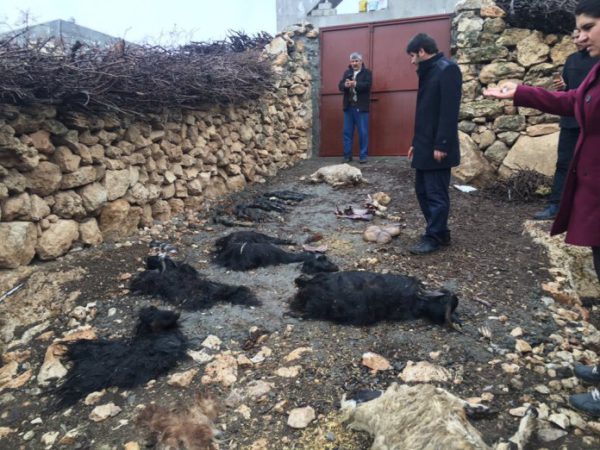 The military blockades of Korukoy (Xeraba Bave) and Doganli (Talate), two villages in Turkey’s southeastern Nusaybin district were lifted on Wednesday. Photos of the aftermath of the blockades began circulating on social media and Kurdish news outlets today showing the violence perpetrated in the villages.

Kurdish news agency Dihaber reported that in Korukoy, which was blockaded for 19 days, soldiers had used some of the villagers’ houses as military bases while burning down many other houses and barns with animals inside.

A house belonging to Abdi Aykut, a villager who was tortured severely and arrested on Thursday, was burned down by the military forces. Many of the villagers have claimed they they were threatened by the security forces to remain silent on what had happened in the village.

Speaking to Dihaber, Abdi Aykut’s wife said “there was no conflict here (near their house), the soldiers told us they wouldn’t do anything to our house but they burned it down.” Another villager whose barns were set on fire said “I lost my cow and 40 chickens, I won’t let the soldiers stay unpunished”.

Speaking to ANF news agency, People’s Democratic Party (HDP) deputy Mehmet Ali Aslan likened the aftermath of the blockade to the southeastern Cizre and Nusaybin districts which were blockaded for months last year.

Kurdish media also reported that five bodies had been pulled from a wreckage in Doganli village after several houses were destroyed in bombardments. Doganli was blockaded for nine days.

The blockade of Korukoy, which began on 11 February later spread to neighbouring villages Doganli (Talate), Kuyular (Cibilgirav) and also Yardere (Qurdise). According to Turkish media and the authorities, Turkish soldiers had been conducting an operation against members of the outlawed Kurdistan Workers’ Party (PKK).