In Turkey, academics asking for peace are accused of terrorism – Judith Butler and Başak Ertür

A petition asking Turkey to end violence against Kurds has been distorted by the president’s regime – and its signatories vilified. We must rally behind them! 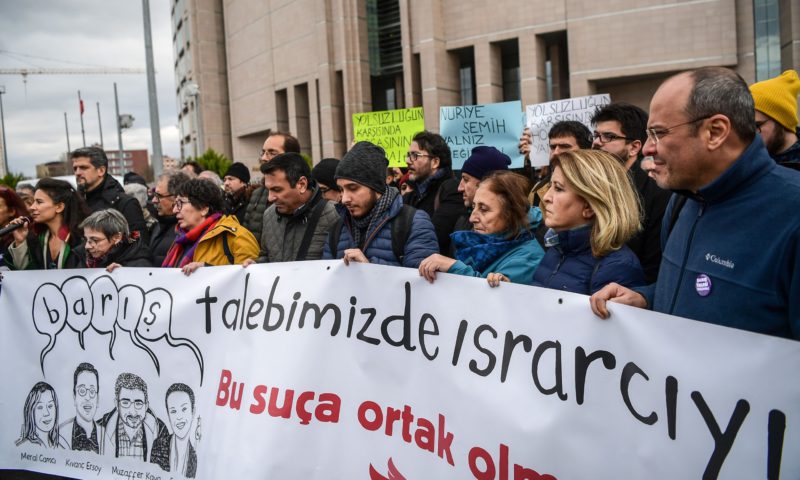 ‘It remains imperative to keep a close eye on the proceedings.’ Protesters gather in front of an Istanbul courthouse, in support of the group of academics charged with terror offences. Photograph: Ozan Kose/AFP/Getty Images

Last week the trials began in Istanbul of those who signed the Academics for Peace petition in January 2016. A total of 148 trials are scheduled through to May 2018, with new trials expected to be announced in the near future. Each focuses on a single individual, but the indictment is the same for all of them. If they are found guilty, each signatory faces a prison sentence of up to seven-and-a-half years.

In the petition, entitled “We will not be a party to this crime”, more than 2,000 signatories sought a negotiated solution to the military conflict between the Turkish state and the Kurdistan Workers’ party (PKK). At a time of heavy clashes in Turkey’s Kurdish-populated towns, the petitioners objected to the continuation of violence against the Kurdish people, called for an end to the round-the-clock curfews that deprived the population of necessary provisions, and asked that the Turkish government resume talks with the PKK that the government itself had previously inaugurated. The petition referenced violations of international law and basic democratic principles, and accused the government of “deliberate and planned massacre and deportation”.

Nearly 500 academics who signed have already lost their positions with no prospect of working again; some are now subject to travel bans; and some had their passports revoked, preventing them from working in Turkey or abroad.

What is the substance of the indictments? The public prosecutor accuses the academics of “making propaganda for a terrorist organisation” under article 7/2 of the Turkish anti-terror act. The petition’s call to cease violence and comply with international law is taken by the state to be “propaganda” for the PKK. The indictment offers no careful reading of the actual petition. Most strange, then, that the indictment begins with the petition, citing it verbatim, and then concludes, without any argument, that it is a declaration that supports the PKK.

This is a wilful distortion and reversal of the clear meaning of the petition. In fact, the petition calls for a peaceful settlement, therefore it clearly does not affirm the violent aims and actions of any Kurdish group. And yet that word “peace” becomes code for “terrorism”.

The steps by which the indictment distorts the petition seem to be these: (1) in calling for the cessation of violence against the Kurdish people, the signatories are taking sides with the Kurds; (2) the Kurds are regarded as terrorists, so taking sides with them is to ally with terrorism; (3) the call for a peaceful solution involves negotiating with terrorists; (4) a call for negotiation with terrorists constitutes propaganda for a terrorist organisation. Thus, (5) a petition to cease violence and enter into negotiation to achieve peace and to comply with national and international laws protecting human rights is nothing more than propaganda for Kurdish violence.

The indictment thus reverses the petition’s accusation of state violence. It is the signatories who are considered to have broken the law by “organising defamation campaigns against the Republic of Turkey, its government, judiciary, army and security forces using press and media…” It is the signatories who by carrying out their propaganda campaign “for the armed terrorist organisation PKK … legitimises or promotes its methods including coercion, violence and threats.”

Suddenly, those who call for peace rather than violence, those who oppose massacres as crimes against humanity, are themselves accused of advancing a violent agenda.

The proponents of the petition are accused of “spread(ing) false, baseless and malicious news through disinformation and information pollution, target(ing) the Republic of Turkey, its government, its army and security forces.” They accuse the peace petitioners of making “war” through the media, but their war is now taking shape in a series of show trials, made for mass media consumption.

Curiously, the call to include international observers to make sure human rights are honoured and to participate in peace talks is interpreted in the indictment as “an assault” on Turkish state sovereignty. Recep Tayyip Erdoğan, the president, initiated this line of thinking when he lambasted the petition’s call for international observers as the product of a “mandatist” mentality, a misrepresentation that is most provocative in a world where international norms of human rights have indeed been mobilised for interventionist aims, often with catastrophic consequences.

Democracy in Turkey is going on trial

Letters: A letter signed by Noam Chomsky, Clive Lewis MP, Peter Tatchell and others calls for opposition politicians Selahattin Demirtaş and Figen Yüksekdağ to be released from prison
Read more

Further, Turkey’s long history of desire for and rejection by Europe, and the protracted process of seeking admission to the EU, have created widespread resentment toward international powers. The petition’s invocation of the international, however, is not interventionist: it calls upon the utopian potential that international human rights norms have sometimes offered to struggles for human dignity that require a counterpoint to state violence.

International solidarity is once again crucial at this time when our colleagues in Turkey are facing criminal trials. It can take the form of supporting dismissed scholars financially, and calling on professional organisations and higher education institutions at both the national and international level to undersign and heed our colleagues’ call for solidarity, whether through a targeted boycott or a different campaign.

It remains imperative to keep a close eye on the proceedings and, despite the risk to those involved, to call for lawyers’ associations and human rights and educational organisations to sponsor delegations to Turkey to observe the trials over the next months. It is important that they report on how these proceedings go and what actions can be taken to defend our colleagues who are suffering state retaliation for expressing their dissenting view – and their wish for peace.

• A longer version of this article appears here

• Judith Butler is the Maxine Elliot professor in the department of comparative literature and the program in criticial theory at the University of California, Berkeley

• Başak Ertür is a lecturer in law and co-director of the Centre for Law & the Humanities at Birkbeck School of Law, University of London