In Turkey, the state doesn’t talk—it only shoots – Ercan Ayboga 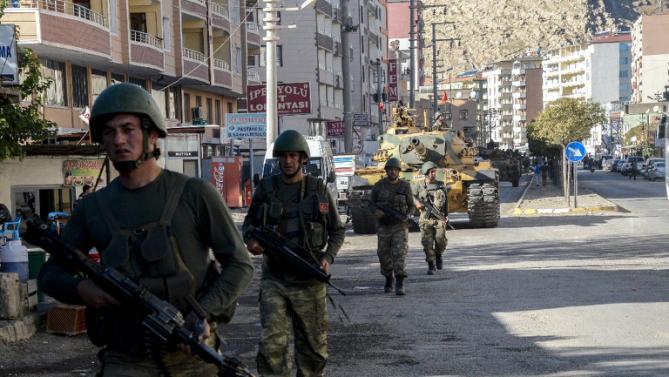 This article was originally published at Die Wochenzeitung. It was translated from German by Janet Biehl.

A gripping eyewitness account from Diyarbakir, in southeastern Turkey, where the state continues its onslaught on the Kurdish civilian population.

It’s freezing cold in Amed, as the city of Diyarbakir is known to its residents. Over ten centimeters of snow blankets the ground, something that happens only every three or four years. And at exactly this moment, fighting is escalating in Amed’s old neighborhood of Sur and in the cities of Cizre and Silopi, in Sirnak province.

I’m here in the press office of the municipal administration, along with three journalists and a researcher. These days the office serves as a de facto base for journalists and researchers from western Turkey and abroad. We talk about what has been going on in the region for the past few months.

The events unfolding here are nearly incomprehensible even to those who live here. Every morning, every evening, and every night a wave of exhaustion pervades my body as I hear shots, detonations, and explosions from nearby Sur. Also during the daytime, but them I’m at work.

The others say the same thing, often more dramatically. Many lie awake all night, every night. Last night a mortar round landed on the roof where one of them is staying.

In this city of a million people, we observe with dread how the state, dozens of times a day, uses tanks and artillery to shoot at the old city, to try to break the resistance of 200 to 300 young people, organized in the illegal YDG-H. The state doesn’t speak—it only shoots.

Last spring the Turkish government unilaterally broke off peace negotiations with the banned PKK (Kurdistan Workers Party) and then at the end of July unleashed war on the PKK. The young people then established “liberated spaces” in several cities, spaces free of repression. In tandem, the council-democratic neighborhood people’s councils of Diyarbakir and 20 other places declared autonomy.

The state then began to systematically arrest political activists in North Kurdistan—one thousand in three weeks alone. Intermittently, between 2009 and 2012, more than nine thousand people had already been arrested. Many people here want the long-standing military conflict in the mountains to come to an end. Most are disgusted that the AKP of President Recep Tayyip Erdoğan denied the electoral success of the leftist-pro-Kurdish party HDP last June and went on to hold a second election under repressive circumstances.

I’m on my way home, and it’s still snowing. Tanks roll past me, heading for the old city. Their effect on the city is terrorizing. This cannot stand. Last spring a rebellious mood prevailed in the city, after the town of Kobane, in the Kurdish part of Syria, was liberated. The revolution in Rojava spread its radiance brightly. Today that feels long ago and far away. Peace was then, war is now—and this time in the city!

I think only in categories of “safe” and “dangerous” places. I feel like I’m in a bad movie that’s getting worse. Then I remember something an Argentine friend once said to me, while here making a movie: “There are two surreal places on this planet: Mexico and Kurdistan.”

Up until October, many HDP members in Amed—where the party got 78 percent of the vote—questioned the sense of the call for autonomy and all the ditches and barricades of the young people. They were dumbfounded. And the most political among them—Amed is a very political city—couldn’t work out a reasonable analysis. Many asked me, “How long is this going to continue? Will they stop next month or what?”

I think they have awakened from a dream now and are in a state of shock. For a century, we Kurds have been second-class people. We want peace, I feel that, but we want a just peace. Even those who lost siblings or children due to the terror of the state in the last 30 years, as guerrillas or as civilians, desire peace so strongly that they eagerly believe every spark of hope.

Many mistrust the state, which has acted ever more brutally since the summer. Its acts of cruelty with the recurring curfews—in Sur, since December 1—are gradually waking the people up. First it was only the political activists, and now even the residents often say things like “the resistance has begun” and “there’s nothing left for us now but to fight with dignity.”

Unfortunately we have a president who, to an unprecedented degree, is persecuting all peace-seeking Kurds and non-Kurdish democrats in Western Turkey—they are perhaps in a greater state of shock than we are—so as to establish himself as the eternal ruler. We must resist! That may sound like propaganda or a morale-boosting slogan. But what solution do the critics have? In the past only resistance has had any effect.

And meanwhile what are the European governments doing? They send President Erdoğan money so he will detain the refugees in Turkey, and otherwise they shut their eyes. The EU is once again even talking about accession, to bind Turkey closer to itself. Suddenly all the criticism of recent years is silenced. Okay, state politics is crap. But those of you in Europe—you still have a halfway independent public sphere, which we are losing here. Get to work, and don’t allow this sordid deal to happen!

Three hours later I am translating a letter from a young person from Silopi, Inan, whose mother was shot in the street last month, and succumbed to her wounds because for one week the police snipers shot anyone who tried to help her. A week ago a journalist published the story on the blog of a Turkish newspaper. This is perhaps the most difficult translation of my life. I want to share it with you.

When we learned that my mother had been shot, we rushed to the spot. Before we arrived, my uncle had tried to get to her, but they shot him too. As I arrived, neighbors were carrying my dead uncle’s body away. I asked about my mother, and they said she was still lying in the street. When I tried to go to her, they held me back. I cried, cried, cried. My mother had fallen in the middle of the street and was just lying there. At first she had moved a little, but then her movements subsided. Everyone we called—representatives, regional councilors, provincial governor—said the snipers should withdraw so we could remove her body.

What was my mother feeling as she lay there? She suffered. For seven days she lay in the street. None of us slept, so we could keep the dogs and birds away from her; she lay there, 150 meters away, and we saw how she had lost her life. In those seven days, the state caused us as much suffering as any one human being can cause to an other.

My mother still had her shawl in one hand, her hands had become stiff, the position of her body reflected her struggle to survive. The blood was dry. Her hands, her face, where she fell to the ground, was covered with dirt, her clothing was drenched in dried blood.

The believers have ripped out the soul of my mother. The eyes of my mother remain open, her face tilted toward our house. I cannot express how much pain I am feeling. Seven days in deepest winter she lay in the street. The most painful thing is not to know how long she stayed alive. I hope she died right away. They have killed my mother.

If you do not feel anything, then reread this letter—over and over.

In recent weeks in the Kurdish parts of Turkey, individual cities and neighborhoods have been transformed into war zones. Hidden from the public, Turkish military and police forces have moved with heavy weapons against the rebels, often young people, and do not spare even nonparticipants. Human Rights Watch has assembled eyewitness accounts showing that the security forces have opened fire even on those who try to leave their homes. Local human rights groups report that more than 150 civilians have been killed.

After the parliamentary elections in November, hopes rose that the Turkish government would end the course of confrontation that it had begun in July. Those hopes have been dashed. On the contrary, the repression has intensified, even of elected officials of the pro-Kurdish HDP party. Several of them, including the co-leader Selahattin Demirtas, have been threatened with charges of separatism.

Ercan Ayboga, son of Kurdish-Turkish parents, studied environmental engineering in Germany. He is active in the Mesopotamian Ecology Movement and works for the city administration in Diyarbakir as an environmental consultant and in the international press office.