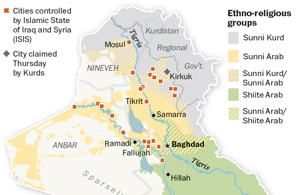 IRBIL, Iraq — Iraq was on the brink of falling apart Thursday as al-Qaeda renegades asserted their authority over Sunni areas in the north, Kurds seized control of the city of Kirkuk and the Shiite-led government appealed for volunteers to help defend its shrinking domain.

The discredited Iraqi army scrambled to recover after the humiliating rout of the past three days, dispatching elite troops to confront the militants in the central town of Samarra and claiming that it had recaptured Tikrit, the home town of the late Iraqi strongman Saddam Hussein, whose regime was toppled by U.S. troops sweeping north from Kuwait in 2003.

But there was no sign that the militant push was being reversed. With the al-Qaeda-inspired Islamic State of Iraq and Syria now sweeping south toward Baghdad, scattering U.S.-trained security forces in its wake, the achievements of America’s eight-year war in Iraq were rapidly being undone. Iraq now seems to be inexorably if unintentionally breaking apart, into Shiite, Sunni and Kurdish enclaves that amount to the de facto partition of the country.

As the scale of the threat to the collapsing Iraqi state became clear, Obama administration officials met to discuss options for a response, including possible airstrikes. An Iraqi official close to the office of Prime Minister Nouri al-Maliki said the United States had committed to carrying out airstrikes against the militants, but U.S. officials said no decision had been reached.

President Obama indicated there would be some form of intervention, though he did not specify what. “It’s fair to say . . . there will be some short-term, immediate things that need to be done militarily,” he said.

The attempted government counteroffensive only appeared to have slowed the pace of the advance of the extremist army, which had headed south toward Baghdad after capturing the northern city of Mosul earlier this week.

Police officials on Friday said that militants driving on machinegun-mounted pickups entered the towns of Jalula and Sadiyah in Diyala province on Thursday night, according to an Associated Press report. Jalula is 80 miles and Sadiyah is 60 miles from Baghdad.

In this week’s offensive, more than 90,000 Iraqi soldiers deserted rather than confront the militants, according to the official close to Maliki’s office who spoke on the condition of anonymity because he is not authorized to talk to the news media.

The official said the extent of the militants’ control of Tikrit had been exaggerated and that it is now back in government hands. He denied a report in the Wall Street Journal that members of the Iranian Revolutionary Guard Corps had helped the security forces.

But the official’s claim could not be confirmed. A chilling video posted on YouTube showed hundreds of Iraqi soldiers captured at the former Speicher U.S. military base being herded by the militants to an uncertain fate, amid fears that they had been executed.

Even as the security forces attempted to regroup elsewhere, the government lost control of more territory in the northeast of the country, to Kurdish forces who took advantage of the chaos to assert control, unopposed, of the city of Kirkuk.

The government of the semiautonomous region of Kurdistan has long coveted Kirkuk, which sits atop a large if depleted reservoir of oil, as the capital of an independent Kurdish state. Successive Baghdad governments have pushed back against those aspirations, and the seizure of Kirkuk further exposed the helplessness of the central authorities.

Meanwhile in Mosul, one of Iraq’s most important cities, ISIS set about asserting its control, issuing an 11-point charter spelling out the creation of an Islamic state along with new laws, punishments and incentives. Alcohol, cigarettes and drugs are outlawed, citizens will henceforth be required to pray five times a day, thieves will have their hands amputated and women must stay indoors except in cases of emergency, the charter said.

“To those of you who ask, who are you? The answer: We are the soldiers of the Islamic State of Iraq and Syria . . . who took it upon ourselves to bring back the glory of the Islamic Caliphate and turn back injustice and indignity,” the charter announced.

It also struck a conciliatory note, telling citizens that those who embraced its vision would be forgiven. “Whoever hated us yesterday is safe, unless he rejects, fights or abandons Islam,” the charter said. Those who oppose their new rulers, however, will be “killed, crucified or have their hands and feet cut off,” it added.

For many in the mostly Sunni city, the ouster of the hated national security forces was welcome, offering a sign of just how much the Shiite-dominated government in Baghdad has alienated the Sunni population in the eight years since Maliki came to power.

There were celebrations on the streets of the city overnight Tuesday, according to videos posted on the Internet, as ISIS fighters paraded some of the booty they captured from fleeing security forces, including an assortment of army and police vehicles. The Iraqi official confirmed numerous eyewitness reports that the militants flew a captured helicopter over the city late Tuesday.

Some 500,000 citizens have fled the city of 1.5 million, seeking refuge in nearby Kurdistan. On Thursday, however, Mosul residents said life was getting back to normal under the supervision of ISIS fighters, who have prevented looting, protected banks and institutions and imposed a level of security unknown under the rule of the reputedly corrupt and inefficient security forces.

“Normal people, like me, we aren’t scared,” said Wissam Attiyeh, a 33-year-old electrical engineer who was leaving town with his wife and five children; he said it was fear of Maliki’s response, not ISIS rule, that was driving them to flee. “The ones who are scared are those who did something bad in the past, like those in the army and the police.”

He said ISIS had restored electricity, were running services and that shops and businesses have reopened. “People are willing to give them a chance,” he said.

Meanwhile, in Shiite neighborhoods of Baghdad and in towns and cities further south, young men flocked to recruitment centers to volunteer to fight the extremists, underscoring the sharpening sectarian divide that risks engulfing all of Iraq in war.

State television broadcast footage of the long lines, accompanied by patriotic songs whose lyrics tout the army’s achievements: “We’re the soldiers of the nation, we shall never retreat.”

Shiite militias also were gearing up for a fight.

“We announce our readiness to defend Iraq and its holy shrines,” said the Iranian-backed Asaib Ahl al-Haq in a statement, pledging “revenge for the blood of the martyrs” killed by ISIS.

The statement came as ISIS issued its own pledge to avenge past grievances, vowing to march on Baghdad “to settle scores” and also the holy Shiite cities of Najaf and Karbala further south. In an audio address posted on the Internet, ISIS spokesman Abu Mohammed al-Adnani taunted Maliki. “What have you done to your people, oh foolish one?” he said. “You lost a historic opportunity for your people to control Iraq, and the Shiites will always curse you for as long as you live.”

In yet another indication of Maliki’s growing powerlessness, parliamentarians failed to show up in sufficient numbers to secure a quorum for his request for the passage of a law declaring a state of emergency.

Sly reported from Beirut. Ahmed Ramadan in Beirut contributed to this report.

– MAP: How ISIS is carving out a new country

– Who’s who in the battle for Iraq