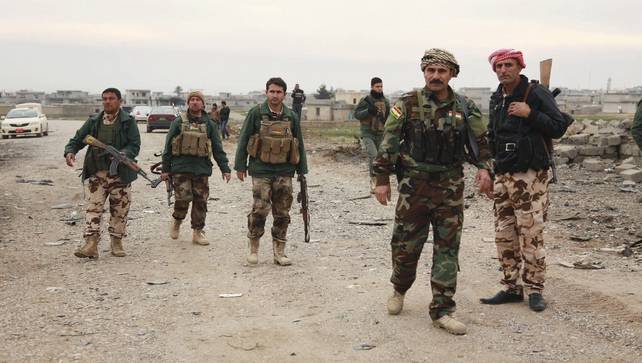 (Reuters) – Kurdish and Yazidi fighters battled to take the strategic northern Iraqi town of Sinjar back from Islamic State on Sunday after breaking a months-long siege of the mountain above it.

Seizing the town would restore the majority of territory Iraq’s Kurds lost in the jihadist group’s surprise August offensive.

It would also give a huge strategic victory to both the Iraqi Kurds and the central government in Baghdad, as the Kurdish fighters could then cut the highway from Syria to Mosul, a vital supply line for Islamic State.

Backed by U.S. warplanes, Iraqi Kurdish and Yazidi fighters, also joined by Kurdish guerrillas from Syria and Turkey, pushed into Sinjar from the western border post of Rabia and from Sinjar mountain to the north, to which Iraqi Kurdish fighters opened a corridor on Thursday.

The Iraqi Kurdish region’s president, Masoud Barzani, visited Sinjar mountain and vowed that all of the town of Sinjar would be retaken.

“Most of Sinjar is under our control now. With the help of God we will free all of it. The help of the coalition forces was noteworthy and their support was very effective,” Barzani said on the mountain’s summit.

Wounded peshmerga, as Iraqi Kurdish fighters are known, were raced by vehicle to the mountain summit for treatment. Planes and helicopters rumbled overhead, while from time to time the boom of an airstrike reverberated.

The U.S. military said it had carried out four air strikes around Sinjar on Sunday.

Pick-up trucks full of peshmerga fighters hurtled down to Sinjar town, which was blanketed in smoke.

The military campaign also promised relief for Iraq’s Yazidi religious minority. When Islamic State pushed into the Sinjar area in August, killing or capturing thousands of Yazidis, some took refuge on the Sinjar mountain.

President Barack Obama cited the plight of the Yazidis when he first ordered air strikes against Islamic State this summer.

Returning from the town of Sinjar late on Saturday, Yazidi fighter Qassem Sheshou, head of the Sinjar Protection Forces, said the area was heavily mined, but bragged that the militants had not put up much of a fight. “They fled like rats,” he said.

Fahd Hamid, a Yazidi fighter from Sinjar, said there were 1,700 Yazidi families on the mountain.

Hamid sought refuge there at the beginning of Islamic State’s blitz in August, enduring both near starvation and the fear that the Sunni Arab jihadists would storm the area.

“Our faith in God and this mountain was strong,” Hamid said.

“Our fathers and grandfathers used to talk about past genocides and we didn’t really believe them, but it happened again.”

Asked why he and other Yazidis were not leaving the mountain now that a safe passage had been opened to the north, he said “this mountain is the safest and best place.”

Others longed to return home immediately. “Islamic State has been at our throats for a long time. We want to go back to our village,” said a woman named Gule who was baking bread at an encampment. She said her brother and son had been killed three weeks earlier when they tried to sneak back to their village near Sinjar to try to retrieve some belongings.

The battle for Sinjar is being conducted by a range of groups.

Fighters from Turkey’s outlawed Kurdistan Workers’ Party(PKK) and its sister organization, the Syrian Kurdish armed faction known as the YPG, claimed to have about 500 men present on Sinjar mountain, including those from affiliated armed groups.

The YPG’s supporters said they had opened a new route from Syria to Sinjar on Saturday, and the group’s flag was visible at intervals along the road leading from the mountain to the Rabia border crossing. The two factions said that they had initiated the offensive on Sinjar town. “The YPG came to Sinjar before the peshmerga,” said one YPG guerrilla.

Despite such internal rivalry, some were simply elated to see the Islamic State on the backfoot. A Yazidi volunteer named Kheder, who had made his way to Sinjar mountain from a refugee camp in the north, exulted in the fight and the spectacle of U.S. air power.

“I came to kill the terrorists,” Kheder said. “I like going to war with the Americans.”