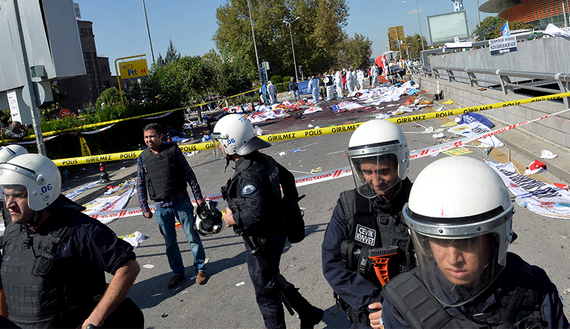 In an apparent attempt to hide its negligence, the Turkish government has imposed a media blackout on the probe into twin suicide bombings that claimed at least 99 lives at an Oct. 10 peace rally in Ankara. Turkish authorities’ failure to stop the assailants, who reportedly were on the National Intelligence Organization’s (MIT) watch list, points to serious government culpability. In addition to gagging the press, the government appears to be leaking information designed to muddy the waters.

In what amounts to a mind-boggling scenario, Prime Minister Ahmet Davutoglu has trotted out the motley crew of usual suspects: the Islamic State (IS), the Kurdistan Workers Party (PKK), the far-left underground Revolutionary People’s Liberation Party-Front (DHKP-C) and the regime of President Bashar al-Assad in Syria. Davutoglu has also said investigators are looking into possible links between IS and the PKK; this claim is being whispered persistently into the ears of journalists and opinion-makers. An extraordinary effort appears to be underway to lead the public by the nose rather than to shed light on the attack.

Regardless of where the probe ends up, one fact is indisputable: The government, through its domestic politics and Syria policy, has created a climate of hostility and aggression toward its opponents. Another fact: the security failure of not preventing the bombings is plain as day. Given these two points alone, the government can’t shrug off responsibility for the carnage.

According to findings not yet announced as official, the two alleged bombers have been identified as Yunus Emre Alagoz and Omer Deniz Dundar. Both were on the wanted lists of the police and the MIT as prospective suicide bombers. The police have established that the men arrived in Ankara in separate cars from the border province of Gaziantep, possibly after crossing from Syria. Alagoz was already well-known to security forces as the elder brother of Abdurrahman Alagoz, the alleged suicide bomber who killed 34 leftist activists in the border town of Suruc on July 20. Authorities said both brothers belonged to the so-called Dokumacilar group of young men from Adiyaman recruited for the jihad in Syria.

The findings from the Suruc and Ankara attacks, as well as the June 5 bombing of the pro-Kurdish Peoples’ Democratic Party (HDP) rally in Diyarbakir, all point to the same group from Adiyaman. Twenty-one of its members — 18 Adiyaman locals and three foreign women married to group members — had been placed on the security forces’ watch list after intelligence found they had been trained as suicide bombers, had returned to Turkey and had formed sleeper cells.

Moreover, long before the bombings, desperate families had alerted authorities to their sons’ alleged activities. Some even pleaded for their arrest. Dundar’s father told the daily Radikal, “I went many times to the police to get my son back from Syria. In 2014, he returned from Syria and stayed with me for eight months. I filed a complaint with the police and asked them to put him in prison. They took his testimony and let him go. Eight months later, he went back to Syria.”

The family of Orhan Gonder, who allegedly planted two bombs at the HDP rally and was captured in Gaziantep afterward, had done the same. Gonder’s mother recounted how she went to the police repeatedly, even before her son left for Syria. The young man was interrogated in June 2014 and then walked away. A year later, he hit the headlines as the alleged rally bomber.

It was common knowledge that the young men regularly gathered at the Islam Tea House in Adiyaman, run by the Alagoz brothers. One by one, the regulars at the cafe had joined jihadist groups in Syria. The tea house was eventually closed down after persistent complaints by families. According to Gonder’s cousin, the police were aware of the recruiting there, but did nothing to stop it.

In 2013, the Turkish press was already reporting that dozens of young men from Adiyaman had joined IS as well as Jabhat al-Nusra and Ahrar al-Sham. Disillusioned by the lack of police response, some parents tried to find their sons in Syria by themselves. Dundar’s father told Radikal how he had tracked his son down in Aleppo, but had returned home without him after his life was threatened. Another man managed to bring his son home after paying a ransom.

It has emerged that the security forces had received intelligence of a bomb plot against the Ankara rally three days in advance, along with a list of 16 possible perpetrators, including Alagoz and Dundar. The photos of the 16 men had been sent to all the security forces in July.

Davutoglu’s explanation as to why the bombers could not have been stopped has sparked controversy in its own right. In a live interview this week, he argued that the rule of law prevented blanket, pre-emptive arrests. “When there is a sleeper cell, we can’t act like Syria or other countries, just rounding them all up and locking them away. Ultimately, these are people living in this society, and they could have been deluded and so on, but one has to act according to the law,” he said. “Turkey has a certain list of people considered potential suicide bombers. You know, they could be preparing a certain act, but as long as this does not transform into real action, or if you lack information that this act could [actually] happen, you can’t make arrests.”

Yet, the government has at its disposal a law enabling detention based on “reasonable doubt.” The law, passed last year despite strong objections from the opposition, has been readily used against critical journalists, activists and business people.

Regardless of who the bombers were, the government is responsible for creating a political climate that emboldens violence. The attacks in Diyarbakir, Suruc and Ankara took place in an environment that encourages assailants, allows for mob violence against government opponents and legitimizes unlawfulness. The domestic and external contexts of the bombings are important:

– As a result of the government’s Syria policy, dangerous armed groups clustered in Turkey’s border regions. They recruited Turks and set up cells in cities across the country. Now, they pose two big risks: They could turn their weapons on Turkey if Ankara’s Syria policy changes, and these individuals or groups could be used as tools or fronts in Turkey’s internal conflicts.

– The government uses dangerous rhetoric against Turkey’s Kurdish movement. In a bid to discredit the Syrian Kurds’ autonomy drive, it has equated the Syrian Democratic Union Party (PYD) with the PKK and propagates that the PYD-PKK duo is more dangerous than IS. This tactic has laid the ground work for violence against Kurds in Turkey. Similarly, groups fighting the Kurds in Syria have come to see the HDP as an enemy through the PKK link.- The Suruc bombing targeted Turkish groups in solidarity with the Kurds. Turkish groups’ alignment with dissident Kurds throws a wrench in the AKP works, irking the state establishment, hence, the war on the HDP, which seeks to embrace Turks as well. The Diyarbakir bombing directly targeted the HDP, while the peace rally in Ankara had brought together people from myriad segments of Turkish society, challenging the government’s policy of war. Thus, the bombing amounted to punishing Turkish-Kurdish solidarity.

– The government has created a climate that legitimizes mob violence against the HDP. According to party sources, nearly 500 attacks have targeted HDP offices in recent months. Yet, the assailants have not been captured or punished, which means a de facto immunity has been granted to violence against the HDP and leftist forces in general.
– Security arrangements for public demonstrations and meetings do not adequately cover opposition events. As in Suruc and Diyarbakir, the rally in Ankara lacked the necessary security measures. Even worse, police used pepper gas and truncheons against participants scrambling to help the injured and turned a blind eye to harassment by nationalist groups outside the hospitals treating the survivors.Although the independence of the current probe is doubtful, the initial findings still paint an unfavorable picture for the government. As a result, a full media blackout was imposed on the investigation Oct. 14, including a ban on “criticism.” Turks are now unable to even discuss why and how the deadliest bombing in their modern history happened. This leads to the inevitable question of what the government is trying to cover up.
X
F
E
E
D