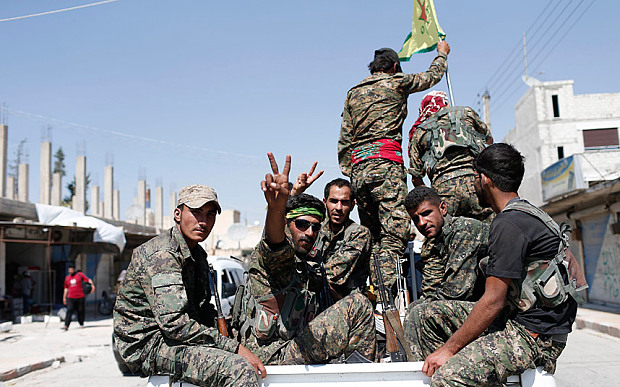 Published by The Telegraph, written by Magdy Samaan and Ruth Sherlock

The Islamic State of Iraq and the Levant (Isil) has begun “expelling Kurdish civilians” from Raqqa, as Kurdish militia and allied rebel groups advance towards the extremists’ stronghold.

Backed by airstrikes from the US-led coalition, the People’s Protection Units (YPG) Kurdish militia and Syrian rebel allies have forced their way deep into Raqqa province in a lightning strike that has brought them within 30 miles of the provincial capital and the nexus of Isil’s rule.

In a sign of growing paranoia, the jihadists reacted by distributing leaflets warning that all Kurdish residents living in Raqqa must “leave” within 72 hours and painting red marks on their houses. Activists from the anti-Isil Raqqa is Being Slaughtered Silently, which has sources inside the city, tweeted a photograph of the circulating document.

The statement, which residents said was also announced through loudspeakers, asserted that the YPG offensive has “made it clear for us that you are cooperating with the Crusader coalition”.

“Based on this, and in order to prevent a clash between you and us, as a result of the actions of your fools (the YPG),” the statement reads, “we are asking you to leave Raqqa within 72 hours.”

“Anyone who stays longer will be arrested and put to trial in the sharia court.”

“They distributed the statement in Kurdish neighbourhoods of the city,” said Ibrahim Muslim, a former member of the Provincial Council of Raqqa and a Kurdish activist.”They say it’s a reaction to ‘the Kurdish-Crusader campaign’, as they call the joint military operation by the YPG and Free Syrian Army rebel groups.”

The jihadists have sought to channel the exodus. They have blocked the road to the Kurdish towns of Kobane or to the recently lost border town of Tal Abyad, Mr Muslim told the Daily Telegraph, instead forcing families to drive deeper into Syria towards Palmyra.

“Today morning, about 15 cars with Kurds families tried to cross to Kobane or Tel Abyad but they were banned by ISIL check points. They were told that if they tried again they will be executed,” said Mr Muslim. “Most of the people fleeing are women and children.”

There were varying reports as to the number of Kurds involved in the exodus. Mr Muslim suggested several thousand were still under threat in Raqqa, but others suggested all but 200 Kurdish families had now left the city. A few hundred Kurds are said to have managed to reach Kobane by sneaking on to desert roads.

One of them, ​Jewan Ali, a disabled 32-year-old who was forced out of Raqqa with his familly on Wednesday, told the Daily Telegraph they were made to leave behind all of their belongings and head towards Palmyra. “They put red marks on our houses, reading: ‘Islamic State properties’,” he said by phone from Kobane.

He said that under Isil the Kurds in Raqqa had been harassed and often subject to arbitrary arrests. “They used to deal with us inhumanely. They used to cut water and foods supplies to our neighborhoods,” he said. “It is very difficult to leave your home.”

The jihadists were also said to be bolstering their defences around the city on Wednesday, with Redur Xelil, a YPG spokesman claiming that Isil had “begun digging trenches,” around it to hinder any advance.

The string of victories, comprising the border town of Tal Abyad, a major Syrian military base and then, on Tuesday night, the strategic hamlet of Ain Issa, present the first major challenge to the extremists’ rule in Syria since Abu Bakr al-Baghdadi declared the territory part of his “caliphate”.

The rapid advance into the province has come in stark contrast to the battle for Kobane, the last direct major confrontation between Isil and Kurdish forces. Although the town itself was of little strategic value, the fight came to symbolise a test of the ability of the US-led coalition and its allies on the ground to defeat the jihadists.

They eventually succeeded, but only after a protracted four month conflict that saw hundreds killed and the entire town razed to the ground

This new offensive has proven a far more effective fight against the extremists, but it will likely still be a long time before the Kurds and their allies attempt to push on Raqqa city itself.

The YPG has repeatedly said that it is not planning an assault on Raqqa, focusing instead on narrowing the jihadists’ reach by cutting off surrounding supply lines.

A purely Kurdish assault on Raqqa would likely be rejected by the city’s Sunni-majority population.

To successfully defeat Isil – the richest and best armed extremist group in the world – in Raqqa, the Kurdish forces would need to ally and coordinate with other Syrian rebel militia groups.

The YPG has been fighting alongside “Euphrates Volcano,” an umbrella of moderate Syrian militias, but it is an alliance that is succumbing to growing mutual and growing rancour.

Last week, more than a dozen of these rebel militias signed a statement accusing the Kurds of committing “ethnic cleansing” by forcibly displacing Arabs and Turkmens from the newly conquered town of Tal Abyad.

The YPG vehemently denied the claims, but at the heart of the argument lies the rub that the two sides are fighting Isil to achieve fundamentally different aims.

For the YPG, the advances into Raqqa province represent an expansion of the territory they call Rojava, as they seek to carve an independent Kurdish state from northern Syria and parts of Iraq.

Celebrations over the conquest of Tal Abyad quickly descended into vicious squabbling, when Kurdish forces reportedly removed the Syrian revolutionary flag that was flying over the town, and replaced it with the yellow YPG.