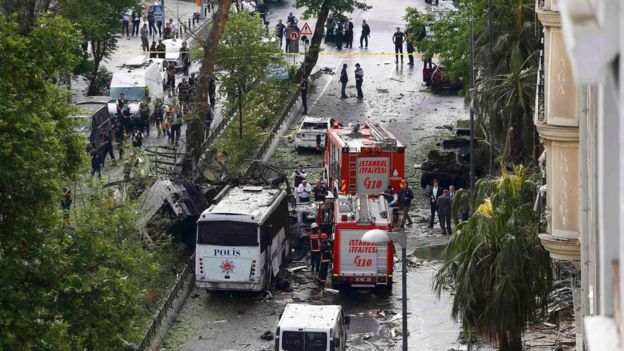 The blast happened during the morning rush hour in central Istanbul. Image: Reuters

It was the fourth major attack in Turkey’s largest city this year.

No group has claimed it, but President Recep Tayyip Erdogan pointed to the involvement of Kurdish militants.

Turkish media said four people had been arrested but gave no details. The banned Kurdistan Workers’ Party (PKK) and one of its offshoots have claimed previous attacks on security forces.

The attack happened near the city’s historic Beyazit Square neighbourhood, a major tourist attraction, and an Istanbul university building.

The explosives were remotely detonated as the bus passed through the busy Vezneciler district at the morning rush hour, Istanbul’s governor, Vasip Sahin, said.

About 36 other people were injured, he added. 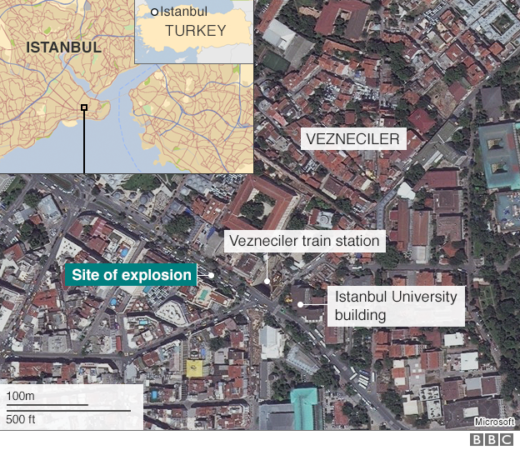 Visiting some of the wounded in hospital, Mr Erdogan said: “These (attacks) are being carried out against people whose duty it is to ensure the security of our people.”

“These cannot be pardoned or forgiven. We shall continue our fight against terrorists tirelessly until the end.”

Turkey’s Foreign Minister, Mevlut Cavusoglu, said the attackers were “cold-hearted” for exploding bombs on the holy Muslim month of Ramadan, which is in its second day.

The force of the blast is clear, with windows of surrounding buildings shattered.

The bomb exploded in front of a hotel which, thankfully, was largely empty because of the current tourism decline here. But among the dead are police and civilians while some of those injured remain in a critical condition.

The most likely culprit is the PKK, a Kurdish militant group considered terrorists by Turkey, the EU and US. Kurdish fighters also targeted police vehicles in Ankara in February and March.

A Kurdish group calling itself TAK claimed responsibility then but the Turkish government and western intelligence believe they are simply an alias of the PKK. This is the fourth attack in Istanbul this year. A nervous, vulnerable country waits to see when the next strike could come.

An eyewitness told Reuters news agency that there was a “loud bang”, strong enough to topple all the goods from the shelves of his store.

“We thought it was lightning, but right at that second the windows of the shop came down. It was extremely scary,” he said.

Turkey has been hit by bloody attacks in recent months by so-called Islamic State (IS) and the PKK or one of its offshoots.

The country is part of the US-led coalition against IS and allows coalition planes to use its air base at Incirlik for raids on Iraq and Syria.

It has also been waging an offensive against the PKK, which fights for autonomy in the majority-Kurdish areas in Turkey’s south-east.

A two-year-old ceasefire between Turkey and the PKK broke down last summer. Since then, violence has killed hundreds of Turkish security forces, Kurdish fighters and civilians.