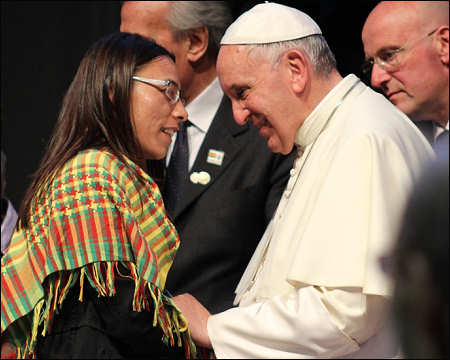 The second World Meeting of Popular Movements, organized in collaboration with Vatican Initiative, took place in Santa Cruz, Bolivia on 7-9 July, bringing over 2000 delegates from popular movements from around 35 countries.

The discussions and the works in the Forum were carried out by different commissions formed under various topics such as land right, sheltering problems, self-determination of nations, women’s liberation strugle, search for peace against the regional conflicts created by imperialism, etc. The representatives of KCK and the Kurdish Women’s Movement took part in different commissions to discuss with the other participants the developments in Kurdistan.

Delegates from different countries also made speeches saying that the liberation struggle and the women’s revolution in Syrian Kurdistan set an example not only for Kurds and the Middle East, but for the entire world.

In the second day of the forum, the representative of the KCK made a speech telling about the recent developments in Syrian Kurdistan and Turkey, and drawing attention to the plans for military intervention of the Turkish army against the gains in Syrian Kurdistan. The KCK representative also called on all the delegates who participate in the campaign for freedom for Öcalan, to continue their works in a more effective way. The KCK representative saluted Pope Francis for inviting the KCK to the 1st Meeting held last year and the declarations of the Bolivian Parliament, which recognized autonomy in Syrian Kurdistan last year at the anniversary of the foundation of the PKK on 27 November and which demanded freedom for the Kurdish Leader Abdullah Öcalan.

The representative of the KCK further drew attention to the similarities between multi-national model in Bolivia and their struggle for democratic confederalism, and called for strengthening the bridge between Latin America and the Middle East established thanks to the revolutionary move of Bolivia.

A final declaration has been issued on 9 July at the Meeting after the completion of the 2-days works of the commissions. The final declaration stressed the necessity to get organised and to build concrete solidarity networks among the popular movements against the domination of the imperialist and capitalist centres.

The declaration also pointed out to the measures needed to be taken against the climate change and savage capitalism as well as to the necessity of stepping up the women’s struggl against male dominancy in specific forms.

Meanwhile delegates from different popular movements and countries held specific meetings with the representatives of the KCK and the Kurdish Women’s Struggle.

The closing speeches of the Meeting were made by Pope Francis and Bolivian President Evo Morales.

The Pope drew attention to how the poverty is created by the imperialist and how the poor becomes the victim of their colonialist policies. He stressed that all the oppressed people must organise and struggle against these policies for a life in dignity.

Bolivian President Evo Morales underlined that the struggles against all injustice must be carried out locally, although the final liberation will be achieved globally. Morales said it is neo-liberal capitalism and imperialism that are threatening the peoples of the world today and added that the Security Council of the UN is a council of insecurity established by imperialists. Morales said the UN will continue to serve for imperialism unless is democratised and called on the peoples of the world to unite and struggle against this hegemony.

Following the closing speeches, Pope Francis talked to the representatives of the Kurdish Women’s Movement and listened to their demands.