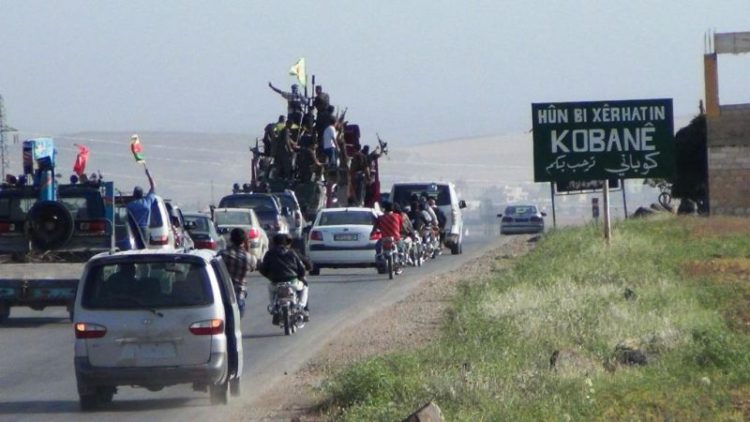 On the evening of 1 October 2014, ISIS gangs have launched an intense attack, aiming to take over the the city centre of Kobane, in Western Kurdistan (Syria) from west, south and east fronts. With the help of heavy artillery and tanks, ISIS gangs have advanced their way near Kobane city, especially from South front. The attacks, started 15th September, are now at most dangerous stage!

The ISIS gangs, have been financed mainly by Turkey, Qatar and Saudi Arabia, providing them with logistics, weapons, ammunition and thousands of members. Their main aim to attack Kurdish people and Kurdish land, starting with Kobane, has now reached to a critical point!

Kurdish People Protection Units, YPG and YPJ, are fighting a heroically historic battle against ISIS gangs, the enemy of humanity. Western countries, who also sees ISIS as an enemy of humanity and who has set up an anti ISIS coalition are yet failing to help Kurds fighting against ISIS.
Chairman of Kobane Canton, Mr. Enver Muslim calls the international Powers to break their silence! He said; ” If ISIS enters Kobane and commits a massacre all international powers will be hold responsible.”

Supporting the Kurdish People Protection Units, YPG and YPJ, resistance against ISIS gangs in Kobane, would only mean supporting the humanity and peace!

We urgently call to the international public to show their support to the Kurdish people, by calling their governments and institutions, to act now and support Kurdish people in this urgent situation of a possible massacre!