Kobanê: A City Rising From The Ashes 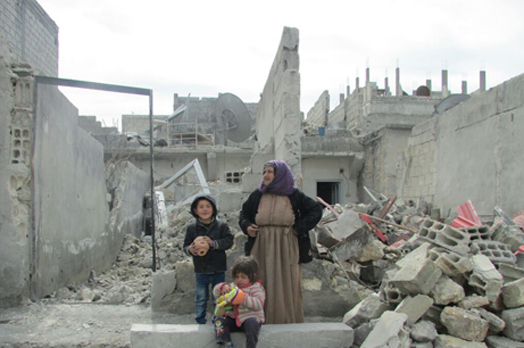 The following is an interview with Yavuz Önen, a former President of Union of Chambers of Turkish Engineers and Architects(TMMOB), and was conducted by Yusuf Gürsucu for Özgür Gündem. It has been translated into English below.

-Can you share something about the process of rebuilding Kobanê in which you yourself are involved?

In the second half of February we met the president of the Kobanê Canton Assembly Enver Muslim and spokesperson Mahmut Beşar in Ankara in HDP party headquarters at the request of HDP MP and party spokesperson for foreign affairs Nazmi Gür. The main topic of our meeting was how to cope with the problems created by war refugees and the damage to the city. A first person executive board which was formed under the name ‘Heyete Nuavakirina Kobanê’ (Comittee for the Reconstruction of Kobanê) declared its desire to meet with various political parties in Turkey, as well as unions, trade organizations, and various municipalities in order to provide support for Kobanê. They also requested support and participation from engineers and urban planners in Turkey in the process to solve what are multidimensional and complicated problems. With this goal they also suggested the creation of a liasons center in Ankara. Within this framework and upon the request of Enver Muslim a meeting took place with current TMMOB President Mehmet Soğancı at the organization’s headquarters the following day.

-What steps were taken following this meeting?

A meeting was held at HDP General Headquarters in which professional colleagues from various specializations important for the reconstruction process were invited as well as groups which had already begun to work on Kobanê including ŞPMMO, HDK MMŞP Assembly, HDK Women and Ecology Assembly, and representatives of TMMOB Diyarbakır. The co-presidents of the DBP, the DTK and the HDK were also advised of these developments. The goal of the meeting was to understand what services needed to be incorporated and organized into the project planning in order to meet current needs as part of the formation of a new platform.

-What decisions were taken at this meeting?

The decisions taken at the meeting were as follows:

-I believe that what is needed most now in Kobanê is energy. What can be done to solve this problem?

Important meetings have been conducted by volunteers in order to meet infrastructure needs as part of work to form this platform. Meetings have also taken place within the Chamber of Electrical Engineers (EMO) around the regular provision of electric energy.

-The city of Kobanê is almost completely in ruins. What has been discussed in these meetings about the cleaning up of the city?

Some work in particular is being done in order to clear work spaces which are full of rubble created by various weapons during the course of this violent battle. One of the most important of these tasks is the clearing of corpses, booby traps, mines and unexploded ordinances. For this kind of work individuals who have experience in military specializations are needed. This work has already begun and unfortunately news has reached us of some deaths owing to explosions. However this clean up work needs to be done and to be carried out by a delegation of specialists. Until this is done other work cannot be done, the safety of the returning population cannot be guaranteed, and a work environment cannot be created. It is also necessary to determine whether any chemical or radioactive waste has been left in these areas.

-In place of rebuilding the destroyed city center there is a debate about building a new form of life space, has a view about this subject come to establish itself?

-In order to reconstruct Kobanê a large labor force will be required – what steps are being taken in this area?

In terms of the human power needed for the reconstruction we have some information that in order to prevent the risk of another attack a population of around seven thousand young people – not including women and children – will be settled in the area.

-Are you planning a fact-finding trip to the region as a platform?

In the first meeting a tendency emerged which pointed to the necessity of a local investigation which would build upon information and suggestions from previous investigations that took place during the planning and project design phase.  In the platform’s second meeting conducted at ŞPMMO an view which stressed planning for temporary settlement areas (tent areas) and the preparation of diagrams and idealized scenarios for medium and long-term settlement came to the fore. An opinion emerged that studies conducted in the area and the opinions and suggestions which will upon this will make these diagrams more productive and save time. Within a short period after this blueprint is drawn up in the ŞPMMO a starting date will be announced.

-What steps can be envisioned toward the reconstruction of the region?

There is a whole range of issues including infrastructure needs around water, energy, transportation, communications etc, education work around forestry, agriculture, animal husbandry, nutrition and housing needs – in short everything needed to build and realize a framework for ecological society and life. The problem is a debate around priorities. As a result of this approach to all these different subjects the regional plan which have pointed to has gained importance. All of these works will be coordinated however groups of experts will be formed in every special area. Every delegation will prepare its own special program in its own area where needed.

-How will tasks be assigned and work allocated within the platform?

A meeting between our platform, which is just beginning to come together, and the individuals, groups and organizations who have already begun work in order to widen this network and define the division of labor is one more of the tasks ahead of us. As a result of these meetings it is likely that in different cities there will be work from more than one office (using existing offices without adding further burdens)