Published by The Guardian, Tuesday 8 Septembre 2015 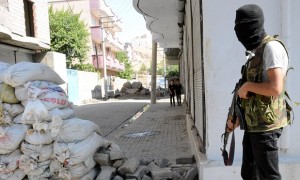 Clad in traditional baggy trousers and the woolly cap of a Muslim pilgrim, Hamdi Olas was 55 when he was struck by a sniper’s bullet. His shirt bloodied, he was lifted onto a blanket and carried several hundred metres by locals frantically seeking a car to get him to hospital.

“He ran out of the house after he saw smoke rising from a nearby building, worried that there might be people trapped inside. He wanted to help,” said a relative. “On his way there he was hit by a sniper.”

Olas was a Kurd in the small Kurdish-majority town of Silopi, close to Turkey’s border with Iraq. Since the Turkish government tore up a two-year truce with the outlawed Kurdistan Workers’ party (PKK) in July, it has deployed a new weapon in the towns and villages of the south-east: sharpshooters.

“Five snipers just kicked our door in and set up camp on the roof of our house, from where they shot at people in the street, at our neighbours’ home,” said Nahide, 19, pointing to the damaged door of her family home. “They stayed there for hours. We collected a whole pile of bullet casings after they finally left.”

The use of professional marksmen follows a new law authorising security forces to use live ammunition rather than less lethal crowd-control techniques to quell protests.

“Before they used excessive amounts of teargas during raids on certain neighbourhoods, they now immediately resort to the use of firearms,” said lawyer Emirhan Uysal, head of the human rights group IHD in Sirnak province. “We warned that this would happen when the law was discussed in parliament. We are very worried that more civilians will get killed.”

When Olas was hit by the sniper, the town of Silopi was all but sealed off by armoured police vehicles, making it almost impossible to get him to a hospital. A car was eventually commandeered.

“There were two younger men sitting in the front,” recalled one family member. “And Hamid’s friend was riding in the back with him, holding him in his lap.”

Eyewitnesses credibly claim that heavily armed police officers stopped the car at the hospital emergency entrance, forcing the two young men in the front of the car to get out and lie face-down on the ground.

Despite pleas to allow the group into the hospital, the police officer opened fire on the vehicle, immediately killing Olas and wounding his friend, the witnesses said. “He would have survived the sniper wound,” said the relative. “But they killed him.”

The violence in the conflict has reached worrying levels, and there is no end in sight. Away from the main towns, PKK militants have since Sunday killed 16 soldiers and 12 police in a series of bomb attacks, prompting air stikes and a vow from the the prime minister, Ahmet Davutoğlu, that the militants will be “wiped out from the mountains”.

In Cizre, close to Silopi, security forces on Friday launched a massive operation against the YDG-H, the PKK’s urban wing, with thousands of police officers deployed. All communication has been cut, according to a local lawyer, leaving residents trapped inside the town without access to electricity, mobile phones or internet connections.

Violent clashes are ongoing in Cizre and the number of those injured in the crossfire between security forces and Kurdish militants unclear. Some local residents have reported that police have surrounded the local hospital, preventing people from getting medical care.

“No peace could quell the anger of the people whose children have been left to die because they were hindered to reach the hospital,” tweeted local MP Faysal Sariyildiz, who arrived in Cizre on Saturday as part of a delegation from the pro-Kurdish People’s Democratic party (HDP).

According to latest reports, at least three civilians have been killed in Cizre since Friday, including a 13-year-old girl who was fatally hit by bullets in her own home.

Coverage of the conflict is an ever-growing challenge. Many Kurdish news sites and twitter accounts were closed following the breakdown of the ceasefire and several Turkish journalists have been fired by their newspapers for reporting from the south-east.

Foreign journalists are also finding it harder to operate. Two Britons, subsequently released, and a Turkish colleague working for Vice News were last week charged with “terrorist activities” after they were taken into custody while covering the clashes in Diyarbakir. On Saturday Dutch journalist Frederike Geerdink was taken into police custody in Yüksekova, together with a group of Kurdish activists she was covering.

In Cizre, mistrust is everywhere: many residents have hung up sheets and blankets in their streets to find cover from possible sniper fire.

At a neighbourhood checkpoint three young men and one young woman stood watch after dark. Sandbags provide cover in the case of a raid by security forces, a PKK flag lodged between them. Each approaching vehicle is stopped, and waved through only after inspection.

All of them are dressed like many other teenagers: in jeans, T-Shirts. Only the scarves wrapped around their faces to hide their identities mark them as members of the YDG-H, or “the youngsters”, as locals often call them.

“We deliberately choose not to dress in uniform to underline that this revolution, this fight is carried out by the people, not by an army,” explained Ahmet, 20, who introduced himself as a YDG-H commander.

Local residents brought pieces of melon and freshly brewed tea. Some pulled up chairs to have a chat with the militants. As some local residents passed by, they shouted a friendly greeting and joke was exchanged. One young man, his face covered by a ski mask, sat huddled behind the sandbags to scroll through his Facebook feed.

“We need to stand watch here and protect our families,” said Rizgar, 20. “If the police manage to come into our neighbourhood, they would kill so many people. There would be arrests and torture.” His companion nodded. “This state simply cannot be trusted.”

While many residents express solidarity with the YDG-H, others are tired of the spiralling violence. “We are caught between all fronts,” Emine, a 35-year-old Cizre native and mother of three, said. “But what can we do? I am scared for my children. I don’t want to see them grow up in a city at war.”

“It’s the reality here now that civilians are being hit. Life has come to a halt,” one local lawyer said. “[The government] is trying to intimidate us, to scare us.” Many accuse the Turkish president, Recep Tayyip Erdoğan, of wanting to woo nationalist voters by attacking the PKK before elections scheduled for 1 November after his Justice and Development, or AK, party failed to reach win enough seats to form a majority government when the country went to the polls in June.

“The HDP got almost 85% in Sirnak province,” the lawyer explained. “This is punishment for trying to reclaim our rights through democratic politics, nothing else. But we want peace, we will stick to peace, we will bury their warmongering at the polls.”

*All names, except official and historical ones, have been changed