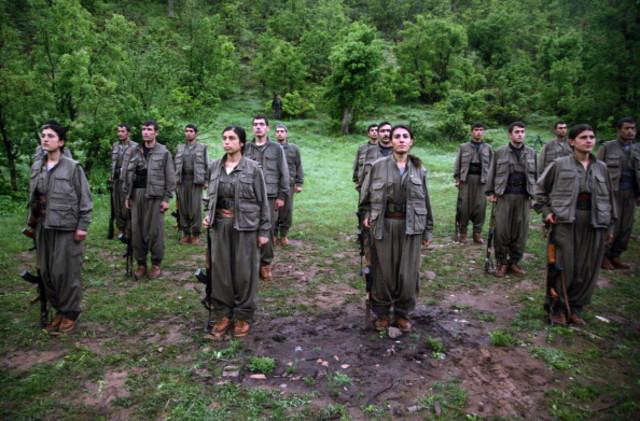 In Iraq, the U.S. is fighting in a de facto alliance with one group on its list of terrorist organizations — the Kurdistan Workers Party, also known as the PKK — against another, Islamic State. This odd situation reveals an emerging truth about the Kurdish group: Its terrorist status is falling out of date. At this point it has to be recognized for the constructive role it can play in Iraq and the wider region.

On the front lines in northern Iraq, even before U.S. airstrikes began, the PKK proved itself to be the most effective fighting force against Islamic State (formerly Islamic State of Iraq and the Levant). Some of its battle units came from Iraq’s Qandil mountains, long a base for PKK attacks into Turkey. Still more came from the Democratic Union Party, the group’s affiliate organization in Syria, where they have fought Islamic State to a standstill in Kurdish areas.

Of course, sharing a common foe with our side doesn’t suddenly turn a terrorist group into a civil and peace-loving organization. But the PKK has shifted in various ways since 1984, when it began a guerrilla campaign to create a Kurdish state in eastern Turkey. (The Kurds, a stateless people of about 30 million, are divided among Turkey, Iraq, Syria and Iran.) In the decades that followed, the group used terrorist methods, often against unarmed civilians and government collaborators. Since then, the PKK has shifted to demanding more autonomy for Kurds, rather than secession, and last year Abdullah Ocalan, the group’s jailed leader, declared an end to the war. Violence has since subsided, and talks are under way to find a political settlement.

None has yet been reached, and recent clashes surrounding the erection and demolition of a statue of a PKK founder in eastern Turkey show how quickly the situation could deteriorate. In any event, the U.S. and the European Union could not simply delist the PKK without bringing Turkey, a critical member of the North Atlantic Treaty Organization, on board for the change.

Yet this should now be possible, thanks in part to the recent election of Turkish Prime Minister Recep Tayyip Erdogan as president. Although this development is cause for apprehension on many fronts, it does give Erdogan the political capital and motivation to finally resolve Turkey’s Kurdish question. After all, without the support of Kurdish legislators, he cannot make the constitutional changes he wants to empower the presidency.

Another reason for all players in the region to rethink the PKK is that, although the group is cultlike and stuck in a Marxist time warp, its members are also secular and largely pro-Western Sunni Muslims. Its combat troops, many of whom are women, were instrumental in saving Yazidi refugees from slaughter by Islamic State fighters. And the PKK’s cause is primarily national, not religious or ideological, so it can be negotiated with — given the right incentives.

Just as important are the deep divisions among the Kurds themselves. Iraqi Kurdistan is split between the Barzani and Talabani factions, who fought a civil war in the mid-1990s and now live in an uneasy coexistence. The PKK is a third, smaller faction that resides outside Iraqi politics and controls its own small slice of territory. Bringing it in from the cold, as was done with two other organizations once on the terrorist list — the Irish Republican Army in Northern Ireland and the Palestinian Liberation Organization in Israel’s occupied territories — would be good for Kurdish unity, too.

Finally, PKK fighters are going to be necessary allies for some time to come, like it or not. For now, Iraq is the theater of cooperation. At some point soon, it will be Syria. Delisting the PKK could help persuade the Kurds in Syria to join forces with the moderate rebels, the ones the U.S. has begun to arm, in fighting Islamic State.

The U.S., Europe, Iraq and Turkey alike have an interest in legitimizing the PKK. It can’t be done overnight, but the process can start now.