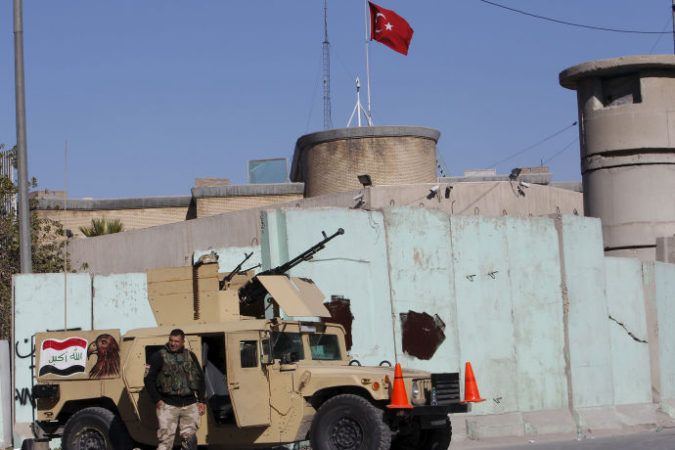 The Kurdistan Communities’ Union (KCK) Executive Council Co-Presidency has released a statement calling for an enhancement of the struggle in four parts of Kurdistan and all around the world against the occupation of the Turkish state in South Kurdistan.

‘TURKISH STATE IS NOT CONCERNED FOR TURKMENS’

THe KCK said it is clear that the Turkish state isn’t concerned for the Turkmen of Tal Afar, adding; “Because the Turkish state has been engaged in the plan to occupy Mosul and Tal Afar by ISIS. Against the Shiite government of Iraq, Turkey has supported Sunni groups and ISIS to take Mosul and Tal Afar. The fact that the Turkish state voiced no reaction while Turkmen in Tal Afar were massacred and forcibly displaced, reveals that it has no concerns over the Turkmens. Turkey’s intention is to strengthen its presence in South Kurdistan, to execute pressure over KDP, and to make KDP and PKK confront each other. It aims to create a Kurdish conflict like the one in the 90s and weaken the struggle of the Kurdish people. Turkish Prime Minister Ahmet Davutoğlu’s remarks “We have no problem with any power, we are just involved in a fight against ISIS and PKK targets in Syria and Iraq”, lays bare that the deployment of Turkish soldiers in Iraq actually targets the freedom struggle of the Kurdish people.”

Stressing that the Turkish state’s whole policy is based on hindering Kurds from growing stronger, KCK said this is why Turkey has openly supported ISIS and Al-Nusra at the cost of confronting the U.S. and Europe. Dispatchment of soldiers to South Kurdistan has strictly taken place on the basis of opposition to Kurds. Assessing this situation otherwise means a failure to understand the Turkish state’s policy of opposition to Kurds. The Turkish state is hostile to the people of South Kurdistan as well. The reason why Turkey doesn’t lay this animosity bare today is the fact that it is engaged in a war against Kurds in Bakurê (North) and Rojava (West) Kurdistan. It would be a great unawareness to suppose Turkey to be a friend of South Kurdistan.”

‘PEOPLE OF SOUTH KURDISTAN SHOULD ENHANCE THE STRUGGLE AGAINST OCCUPATION’

Describing the Iraqi government’s strong objection to the deployment of Turkish forces as a manifestation of the Turkish state’s status as occupier, the KCK noted that the South Kurdistan parliament as the will of the people hasn’t approved the Turkish deployment either.

Putting emphasis on the importance of unity by the Kurdish people and their forces, KCK underlined that Kurds will become the rising folk of the 21st century as long as they unify on the basis of their national interests.

‘TURKISH STATE ALLIES WITH ALL FORCES HOSTILE TO KURDS’

The KCK remarked that the Turkish state is perpetrating a heaviest atrocity against the people in Bakurê Kurdistan, laying siege to cities and burning them to the ground, while it on the other hand allies with ISIS and all forces hostile to Kurds in order to hinder the people of Rojava Kurdîstan from attaining political status.

The KCK said; “The Turkish state which attacked and continues attacking Kobanê is now having gang groups attack Kurdish people in Afrin and elsewhere. All the political powers in Kurdistan should object to the deployment of Turkish military forces in South Kurdistan, and the struggle should be enhanced in every part of Kurdistan and all around the world in order for the expulsion of the anti-Kurd Turkish state from South Kurdistan.”