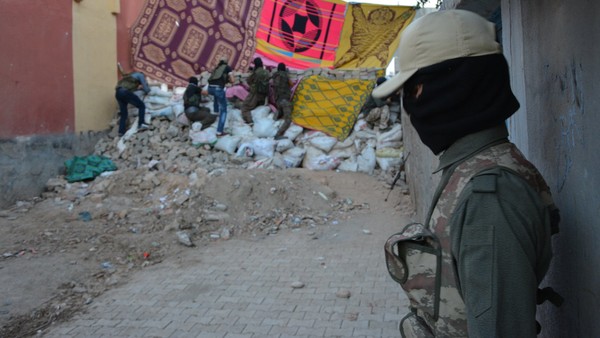 DIYARBAKIR, Turkey – In the past month, much of south-east Turkey has been in a state of violence, as the peace process between the PKK and the Turkish government has unravelled. In Diyarbakir, tensions are high and armed police and military vehicles regularly patrol the streets.

The peace process, which has been ongoing for more than two years, quickly fell apart after two policemen were shot dead in the border-city of Ceylanpinar at the end of July. Turkey has launched over 400 airstrikes on the PKK’s base, the Qandil mountains in northern Iraq and, according to the Anadolu Agency, the strikes have killed more than 700 militants since late July. Meanwhile, the PKK has killed more than 60 police officers and Turkish soldiers, leading to fears of a renewed period of conflict consuming the region.

As clashes continued between the PKK and the Turkish army, a number of Kurdish citizens are readying to join the fight. In a dozen cities, locals have taken up arms in what they brand a “self-defence” strategy.

In Cizre, a Kurdish town close to the Iraqi border, the situation quickly spiralled out of control after the killing of 17-year-old Hasan Nerse on 28 July. Hasan was killed by police when he went out with his friends in the evening, and his family believed he was targeted because he was wearing traditional Kurdish clothing.

On photos circulated on social media, Hasan is depicted with hands bound behind his back, and with several bullet wounds on his body. His mother Makbule Nerse told MEE: “He was never involved in politics, all he did was wear traditional Kurdish clothes which we Kurds have been wearing for hundreds of years.”

Following Hasan’s death, locals in the area of Cizre known as Cudi neighbourhood erected barricades and dug trenches to prevent police from entering.

At night, MEE witnessed the streets across Cizre becoming empty and eerily quiet until the clashes begin. Underneath posters of revered PKK leader Abdullah Ocalan, young men and women patrol the streets. Ubiquitously known as “the youth,” these young Kurds are armed and appear to show no fear of the Turkish state.“We have defended our land for two weeks now – no police has entered and we are now autonomous from the state,” one local told MEE, who declined to give his name.

“Normally in the summer in Cizre, people prefer to come out only in the evening as it is too hot during the day,” Renas Hasim, a law student from Cizre who now lives in Diyarbakir, explained, “but right now it’s the opposite: residents try and do all their business in the day and make sure they don’t leave the house after 8pm.”

The “youth” that patrol the streets are part of a group known as the YDG-H. Often described as the youth wing of the PKK, YDG-H are a relatively new organisation which was set up in the last three years.

“The youth were always part of the Kurdish movement,” one young Kurd explained to MEE in Diyarbakir, “but YDG-H was set up for young Kurds who didn’t want to join the PKK but who could organise and resist the state from their cities.”

Many have claimed that it was the YDG-H, not the PKK, which started the recent conflict by killing two policemen in Ceylanpinar in July, although these claims are impossible to verify. While the YDG-H certainly listen to orders from the PKK and claims to be a part of the Kurdish movement, the PKK leadership has no direct control over their organisation. The YDG-H is comprised of local, autonomously organised groups, and there is no clear leadership.

“We have never seen this kind of resistance coming out of cities before,” Ali, a Kurd living in Lice, another town where violence has been particularly intense, said. “Now the state has to deal with the youth in the cities as well as the PKK. Before they only had problems with the PKK.”

Many citizens appear to support the digging of trenches in certain neighbourhoods, as they believe it offers them some protection from the police. “People have seen a lot of conflict with the state here, and as a result, there is zero trust in the police,” explained Faysal Sariyildiz, the Cizre member of parliament for the pro-Kurdish party, the HDP. “Of course it is sad that these trenches have been built, but what can people do apart from defend themselves?”

Filiz Ölmez, a lawyer working in Cizre, does not see much benefit in the renewal of violence between the PKK and the government, but believes that the police are to blame for the recent events. “If the police hadn’t arbitrarily started arresting hundreds of Kurds at the end of July, the trenches wouldn’t have been dug,” Filiz told MEE while sat in her office in Cizre, “the digging of trenches was the natural solution to stop the huge swathes of arrests.”

In response to the tension and violence that took place in towns in recent weeks, the governors of various districts have declared emergency rule and set up roadblocks.

In Lice, a town close to Diyarbakir, the army has closed many roads and emergency rule has been declared in the last week, although it has since been lifted. With no sign of the youth, locals preferred to stay in their homes with helicopters continuously scouring the ground from above for any sign of militants. The few locals who did venture out were busy trying to put out the forest fires started by the army, a strategy which was used repeatedly in the 90s as a way of destroying any cover that PKK guerrillas may use.

“Some days, the fires spread onto our crops – it destroys our livelihood,” Mustafa explained to MEE as we sat under the roof of a petrol station in a village outside Lice. “Whenever there is fighting the army has always indiscriminately attacked us citizens because they cannot reach the PKK.”

In the nearby city of Silvan, the situation has become increasingly tense. As the Turkish army has moved into the town, where locals resisted and declared autonomy in four separate districts, all access to the town has been cut off and internet connection is intermittent at best. Journalists were also reportedly barred from moving freely in the area.

One citizen, Feyza Odemir, fled the city on Sunday due to the intensity of the fighting. “Over half the citizens have fled,” she explained over the phone. “The city resembles Kobane in some neighbourhoods. Everyone is scared of what will happen next.”

One of the key demands Kurds have made in the peace process is a change to the constitution, offering themselves greater autonomy in the south-east. Such calls echo the demand that Ocalan and the PKK have been making for the last decade.

Erkan Demirer, a Kurdish activist living in Diyarbakir, argued that the sheer number of proclaimed “self-defence neighbourhoods” showed the increased support that the PKK has. “The youth organising and defending their neighbourhoods expresses a new urban force in Kurdish politics which cannot be stopped by the state.”

Whilst many support such a policy, others believe such an ideology is irrelevant to what Kurds really want: an independent Kurdistan. “Across the region, there is a nationalist revolution taking place,” a Kurdish academic who did not want to give her name told MEE. “What young Kurds really want is independence, but the PKK are deceiving them with all this political language of autonomy.”

And others are wary of how the Turkish state will respond in the south-east. “Apart from the YDG-H, everybody is scared about what will happen when the state retaliates,” warned Idriss Aktas, a citizen from Cizre who is currently working in Mardin. “And the youth don’t know how bad it was in the 90s. We don’t want a repeat of those days.”