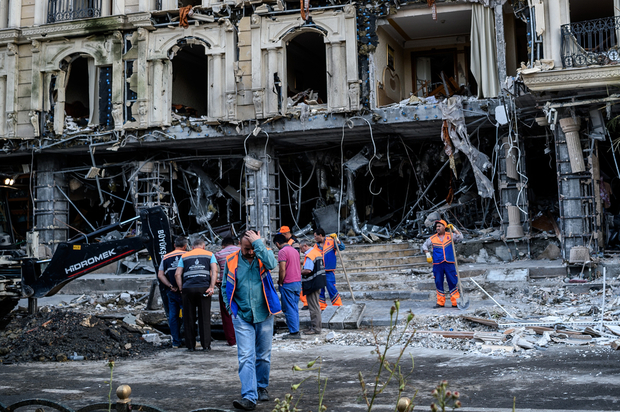 Municipal workers clean the damages caused to a hotel and the road by a bomb in the Vezneciler district of Istanbul on June 7, 2016.  AFP PHOTO / OZAN KOSE

Militant Kurdish group the Kurdistan Freedom Falcons (TAK) on Friday claimed a car bombing in the centre of Istanbul that killed seven police and four civilians, warning foreign tourists Turkey was no longer safe for them to visit.

The TAK – seen as a splinter group of the Kurdistan Workers Party (PKK) – said the attack on Tuesday was revenge for operations by the Turkish army in the Kurdish-dominated southeast.

“The action was carried out to counter all the savage attacks of the Turkish Republic in Nusaybin and Sirnak and other places,” it claimed, referring to the areas in the southeast where the army had been carrying out operations against Kurdish militants.

The group, which previously claimed to have shelled Istanbul’s second international airport, reaffirmed a previous warning that foreign tourists should not visit Turkey for their own safety.

“We again warn foreign tourists who are in Turkey and who want to come to Turkey: foreigners are not our target but Turkey is no longer a safe country for them,” it added.

The group described the attack as a “sacrifice action,” implying it was a suicide bombing, but did not give any further details.

It said that the ruling Justice and Development Party (AKP) “which obstinately insists on a wild war against the Kurdish people is responsible for the civilian deaths. The Turkish people, who keep quiet about this war, continue to be victims”.

The TAK has already claimed two attacks this year that killed dozens of people in the capital Ankara in February and March, raising concerns over security in the country.

Its founders are believed to have broken away several years ago from the PKK, which has waged a more-than three-decade insurgency against the Turkish state.

Little is known about the TAK group, but analysts consider its aims and methods to be more radical than those of the PKK, which concentrates its attacks in the southeast conflict zone rather than cities like Istanbul or Ankara.

Turkey has been on edge after a string of attacks this year blamed not just on Kurdish militants, but also the Islamic State (IS) group.

The new Istanbul attack is set to be a further blow to the country’s key tourism industry, which has already seen visitor numbers slump almost 30 percent this year over security fears.

The bomb struck near Vezneciler metro station, within walking distance of tourist sites including the Grand Bazaar and Suleymaniye Mosque.

The front of the upscale Celal Aga Konagi Hotel, a converted Ottoman mansion favoured by foreign tourists, was wrecked by the bombing while the 16th-century Sehzade Mosque was also damaged.

The attack on Tuesday was followed by a bombing in Mardin province in the southeast of Turkey on Wednesday that killed six people, including a pregnant policewoman, and was claimed by the PKK.

Prime Minister Binali Yildirim has said the PKK had made a bid for dialogue after almost a year of renewed violence that ended a two-and-a-half year truce, but vowed there would be no talks.

“These days news comes, directly or indirectly, from the terrorist organisation saying ‘we can negotiate, we can lay down arms, we should talk’,” Yildirim said late Wednesday. “There’s nothing to discuss.”