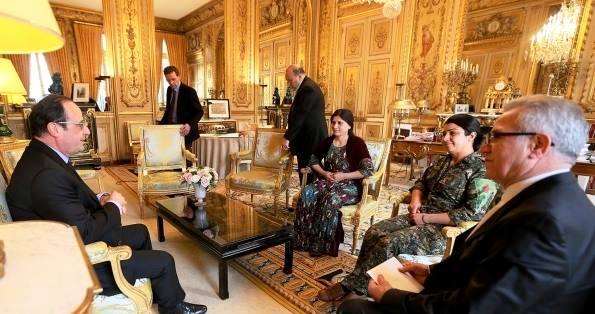 Brussels, 10 February 2015 – Middle East Diplomatic (MED) – After Kurdish forces` victory in Kobane against the isis brutality, Nasrin Abdullah, commander of the Kurdish Women`s Protection Units (YPJ) from Kobani and Asya Abdulla, the co-chair of the Kurdish Democratic Patriotic Union (PYD) were welcomed by French president Francois Hollande in Elysee Palace in Paris. The two ladies were accompanied by Khaled Issa, representative of PYD in France. Hollande congratulated the Kurdish leaders for winning back Kobani from the isis terrorists. Kurdish Peshmergas from Kurdistan Regional Government (KRG) played also a important role in liberation of Kobani.

Mrs Nasrin Abdullah dressed in guerrilla clothes and Mrs Asya Abdalla in traditional Kurdish dress were received for first time from head of western state. The delegation from Kobani asked France for logistic support in the fight against isis terrorists.

“It is a historic meeting and maybe a first step towards something positive”, said Asia Abdalla to Reuters in Paris. “The meeting went well, but now we wait for concrete steps, acts on behalf of France. To win over isis criminals which have sophisticated weapons, we need weapons and effective support”, added Mrs Asia.

“The terrorists are afraid to fight with women; they prefer to avoid it as much as possible. They are convinced that if they kill a woman, they will not go to the paradise”, said the Kurdish women commander Nassrin to journalists in Paris.

PYD is the main political organisation of the Kurds in Rojava (Syria). YPG is the armed branch of PYD, which has Women`s Protection Units (YPJ) as well.