Kurdistan National Congress calls on Kurds to open their borders 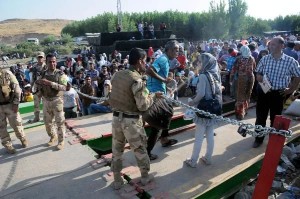 QAMISHLO – The Kurdistan National Congress (KNK) is to protest the closure of borders between the Kurdish areas of Syria and Iraq on Monday afternoon while the 100th anniversary of the Sykes-Picot agreement is approaching.

“In the past, the Kurds were not active regional players; they were not organized and had little power. However, today the people of Kurdistan are organized, have political tools and power, and therefore play an active role in the Middle East,” the KNK said.

“Today, the geographic boundaries between Iraq and Syria have already disappeared – the geographical lines between Bashûr (Iraqi Kurdistan) and Rojava (Kurdistan of Syria) no longer exist. The de facto status of two Kurdish federal entities is now a reality on both sides of this division. We are not obliged and not in debt, and for sure not bound, to protect the boundaries of artificial territories for others,” the KNK said about the Sykes-Picot borders and the upcoming 100th anniversary of the Sykes-Picot [British-French] agreement that divided the Middle East and left the Kurds stateless.

“We do not have to accept them. We, as the people of Kurdistan, must in practice abolish these colonial borders between Bashûr and Rojava. In this way, we unite two parts of Kurdistan. On the 100th anniversary of the Sykes-Picot Agreement, the Kurdistan National Congress, first and foremost, calls on the administrations of Bashûr and Rojava [southern and western Kurdistan] and on every organization and political party in Kurdistan, to keep efforts towards abolishing the Sykes-Picot Agreement at the top of their agendas,” the KNK said.

On 16 March, the Kurdistan Regional Government (KRG) closed the Sêmalka border crossing following disputes between Kurdish rivals. The closure has resulted in shortage of food and supplies in Rojava [Syria’s Kurdish region].

While the local administrations run by the Democratic Union Party (PYD) in Rojava blamed Turkey for pressuring the Iraqi Kurds to close the border, the Kurdish National Council in Syria (KNC) backed by the KRG blamed the PYD for not sharing power, and not following the Duhok agreement between the two parties reached on 22 November, 2014. The KNC denied that Turkey played any role in the closure of the border crossing.

However, recently, tensions have been growing between the KRG backing the KNC, and the Kurdistan Workers Party (PKK) backing the PYD, both in Sinjar and over power sharing in the Kurdish areas of Syria known as Rojava.

Speaking to ARA News in Kobane, Kurdish politician Idris Nassan said: “The only border gate between Rojava and Başûr (Sêmalka crossing) was closed after the declaration of federalism by Rojava administration in March as a kind of pressure to push towards changing minds of Rojava people to meet some of Başûr interests.”

“Some sources referred to Turkish pressure on KRG to close its gate as Turks did before, and others said Turkey paid KRG administration financial costs,” he added.

“Rojava people are demonstrating since KRG closed Sêmalka, asking to open it. They say that it was the only way of bringing basic supplies, as Turkey’s border is completely blocked and ISIS still surrounding Rojava on the Syrian sides,” Nassan suggested.

“From the beginning, the [Sêmalka] crossing has been used as leverage in the case of political rivalry between Rojava and Southern Kurdistan [Iraqi Kurdistan], and since 16 March, we heard the border crossing was closed while we were discussing a new federal project in Rumelan city,” leader of the Kurdish Reform Movement Amjad Uthman said in an interview with ARA News.

“We understand that regional pressures may be behind this decision, but the border crossing is a humanitarian issue, no one can take responsibility for the closure, which risks the starvation of Rojava and worsening the economic conditions,” he added.