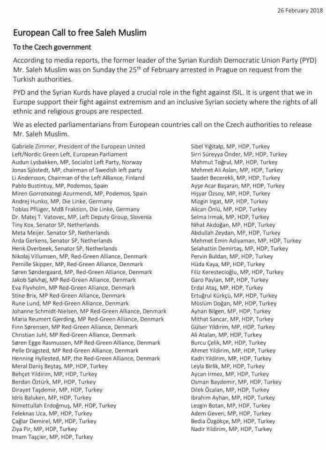 The Democratic Union Party (PYD) on Sunday called for the release of Salih Muslim, the former co-chair of PYD and member of TEV-DEM, who is known the mobilize the public against terrorism.

“This [Turkey] government is taking revenge on those who fought terrorism embodied in Daesh, even worse, to the extent of demanding detention of personnel who do not hold their nationality though not having any legitimate pretexts, on top of them is Salih Muslim who was detained by the Czech authorities without any legal justifications.”

“On behalf of the General Assembly of the Democratic Union Party, we condemn and denounce this immoral, illegal act by the Czech state on its territories which is supposed to be a destination to freemen, democracy-seekers and human rights demanders, and to undertake their role in fighting terrorism spread by the Turkish state through its claws all over the European continent, based on this, we call the Czech state to immediately release mister Salih Muslim and offer apologies about this immoral and illegal act.”

“During this historical, sensitive and decisive phase the humanity is experiencing in fighting terrorism, we call all the Kurdish people and friends in Europe to condemn, take all legal measures and democratic ways to undertake their moral and humanitarian duty in defending this patriotic person,” the PYD said.

Also TEV-DEM on Sunday called for his release, recalling the role the former PYD head played in bringing attention to the fight of Kobani against ISIS years ago.

“This act is contrary to the general values and international laws. The Turkish State has no right to prosecute or arrest any person who is not one of her citizen,” TEV-DEM said. “Indeed, given a diplomatic role in Europe, he contributed during the attack on Kobani to expose these attacks, show their reality and financiers and the brutality of terrorism to all peoples in the world,” TEV-DEM said.

“This makes his detention today illegal and his arrest as a direct support to all the opposite efforts those that Mr. Muslim has worked to clarify and expose to the peoples of the world,” the statement added.

Senior Iraqi Kurdish officials on Sunday also condemned the arrest, and called for his release.

Qubad Talabani, the deputy prime minister of the Kurdistan Regional Government (KRG) on his personal Facebook page called for the release of the senior Syrian Kurdish politician, saying dialogue is the way forward to solve problems.

“Salih Muslim is a man of integrity working for peace in an unrelentingly volatile region,” he said on his Twitter account.

“His arrest will jeopardize any hope for the peace process and reconciliation in the region. Dialogue must be pursued in seeking a resolution,” he concluded.